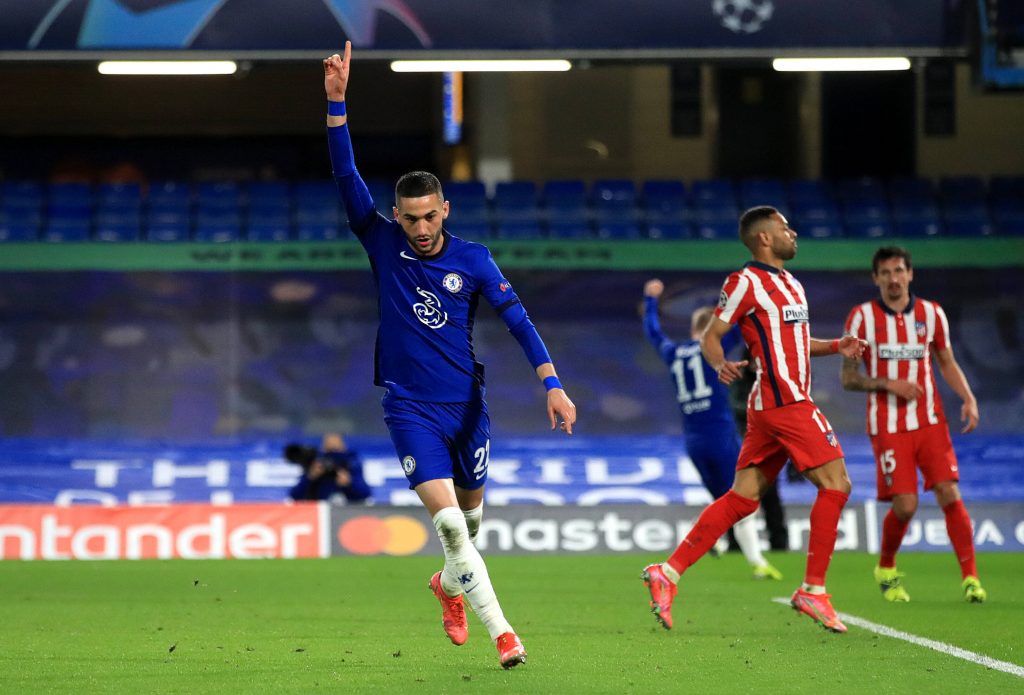 Chelsea reached the quarter-finals of the Champions League following a comfortable 2-0 victory over Atletico Madrid at Stamford Bridge on Wednesday.

It was a quiet beginning to the game, with neither side posing much threat on goal.

The first talking point of the match came in the 26th minute. Cesar Azpilicueta miscalculated his back pass, almost allowing Yannick Carrasco through on goal.

The Chelsea defender subsequently put his arm across the Belgian, who went down under the challenge. Controversially, no penalty or red card was awarded.

Not long after, Thomas Tuchel’s men took the lead with a goal created and finished by three summer arrivals. Kai Havertz fed the ball into Timo Werner on the left. He rolled it across to Hakim Ziyech, who slotted underneath Jan Oblak with his weaker right foot.

There was little action for the remainder of the first half. Joao Felix saw his deflected effort fall into the arms of Edouard Mendy, while Mateo Kovacic struck wide from distance.

The second half continued in the same fashion, with the visitors never getting close to troubling the Chelsea backline.

Meanwhile, the Blues were in the hunt for a second goal to seal the tie. Antonio Rudiger hit a long-range effort narrowly wide, and Oblak made decent stops to deny Werner and Ziyech.

Atletico Madrid’s misery was compounded in the closing stages of the game, firstly by the dismissal of defender Stefan Savic. The former Manchester City man was penalised for an elbow to Rudiger’s ribs and was shown the red card.

Chelsea put the icing on the cake with second in injury time. Substitutes Christian Pulisic and Emerson combined on the counter-attack, with the former laying the ball into the latter to strike home.

The Blues are the third English club to qualify for the quarter-finals. They will be joined by Liverpool, Paris Saint-Germain, Porto, Borussia Dortmund, Manchester City, Real Madrid and Bayern Munich.

Over the last couple of seasons, Kante has somewhat lost his way, but he was excellent in this second leg fixture.

The Frenchman looked every bit the world-class defensive midfielder that we’ve seen throughout the years. He was everywhere on the pitch, constantly winning the ball back, making tackles and interceptions.

Even in the dying seconds of the game, he had the energy to sprint forward to join the counter-attack which led to Emerson’s goal.

A top-class performance from the 29-year-old.

Chelsea – going under the radar

The sacking of Frank Lampard caused a big divide among Chelsea fans. Some thought it was a rash decision, while others believed that he was not the right man.

Those who thought the latter will have had their thoughts validated by the start that Thomas Tuchel has made at Stamford Bridge. In his 13 games in charge, the German has won nine, drawn four and lost none, conceding just two goals in the process.

Obviously, it’s far too late for the Londoners to pose any threat to champions-elect Man City. However, they still have a chance of winning two major trophies and will also want to consolidate their place in the top four.

Even without the likes of Thiago Silva and Mason Mount, it was a confident, dominant performance against a team four points clear at the top of La Liga.

If Chelsea can carry this form into next season, they could be outsiders for a title charge.

Atletico Madrid – a blessing in disguise?

On the surface, the tie seems like an absolute disaster for Los Rojiblancos. They lost against a team they’d have hoped to progress past while failing to score a goal – it capped off what has been a nightmare few weeks.

At the beginning of February, Atletico Madrid were 10 points clear at the top of La Liga with a game in hand. One month-and-a-half onwards, their lead has been cut down to just four points.

It’s been a difficult few weeks for the Spanish side, and they will be desperate to get back on track. Maybe this is the wrong mentality to have, but the chances of them winning the Champions League were extremely slim. Ultimately, the competition would serve as little more than a distraction.

On Sunday, Simeone’s side welcome relegation-threatened Alaves to the Wanda Metropolitano. Despite their drastic slip, they’re still in the driving seat for the La Liga title.

If they can keep this four-point gap going into the international break, they can focus all of their energy on winning a first league title since 2014.

Perhaps their disappointment at Stamford Bridge was for the best.