Not long to go now.

I don’t know about you, but with the World Cup is now within spitting distance I can barely contain myself. In fact I think I might have to invest in some adult daipers just to be on the safe side.

Brazil do the business…

A brace of braces from Manchester City’s wayward winger Robinho and Benfica midfielder Ramires coupled with a strike from returning Real Madrid star Kaka (his first international goal in almost a year) were enough to steer the Selecao to a convincing victory.

Tanzania managed to nab a memorable consolation goal late on, when Jabir Aziz headed home a corner in the 87th minute.

Despite playing the full 90 minutes, Kaka confirmed after the game that he still has some way to go before he regains full fitness;

“I feel good but I still need to let myself go a little. There is still something missing but we have a week to go before the opener and we will work to get better.”

Brazil striker Luis Fabiano was lucky to escape serious injury mere moments before the game was due to begin, when a young mascot narrowly missed the mark with an well-timed uppercut… 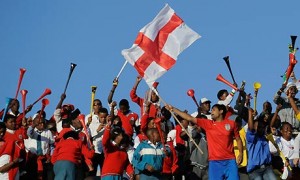 Goals from Jermaine Defoe, Joe Cole (who, perhaps tellingly, played the full game) and Wayne Rooney sealed a fairly uneventful victory for Fabio Capello‘s men, who all managed to get through the game unscathed.

You can watch the FA’s official highlights here

Whilst Gareth Barry came through his first England training session without any problems this morning, James Milner sat out after falling foul of a ‘slight temperature’.

England’s former World Cup captain Rio Ferdinand saw his dreams of leading his nation to glory in South Africa when Emile Heskey sat on his leg during training last Friday.

Speaking about the incident today, the defender absolved ‘The Heskalump’ of any blame over the injury;

“It was a complete freak, an accident. The ball came in from one of the lads to Emile, I’d gone to try and tackle him from behind – he didn’t actually see me coming – we both went off balance and Emile’s weight went down on my knee.

It’s no fault of his at all. It’s just a freak accident that could happen at any given time and it had no connection to any previous injuries I’ve had.”

The defender also confirmed that he will be flying home following England’s first game against the USA on Saturday, meaning that he’ll have to watch the Three Lions’ second and third group ties on television;

“It’s always difficult to watch a game that you feel like you could be involved in. I’ll be looking to come out again later in the tournament if the rehab allows me to do that.” 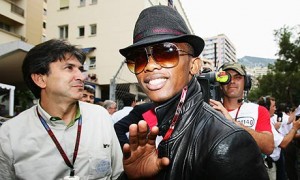 Cameroon striker Samuel Eto’o has splashed the cash (approx. £900,000 to be fairly unprecise) and bought each member of the Indomitable Lions World Cup squad, including the backroom staff, a personalised £29,000 watch as a reward for qualifying for this summer’ tourament.

When asked about his generous outlay, the Inter man shrugged of the lavish gifts saying;

“It’s a small present I’m giving to the national team compared to the joy they gave to our people.”

Only Samuel Eto’o could make such an obviously altruistic gesture still seem so self-serving.

“We will refresh people’s memories in a week or so. We will dive into retrospect so we can believe in ourselves.”

Italy ‘keeper Gigi Buffon seems to believe that going backwards is the only way forwards for the Azzurri. 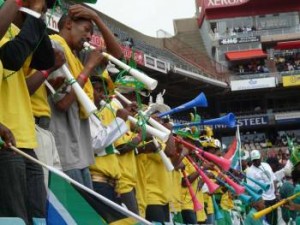 Experts have warned that the vuvuzela (if you don’t know what a vuvuzela is, you bloody well will do by this time next week!) could leave World Cup spectators with permanently damaged hearing, after tests showed that the South African trumpet is actually louder (127 decibels!) than a chainsaw. (Off The Post)

Wayne Rooney has yet again had to be warned about his behaviour after directing a foul-mouthed tirade at the referee during England’s friendly (yep, friendly) against the Platinum Stars yesterday. (Sky Sports)

Slovenia and Liverpool defender Martin Skrtel hopes to be fit in time for his country’s opening World Cup game against New Zealand in exactly a week’s time. (Sporting Life)

Why not give the Soccerlens World Cup Fantasy Football Challenge a try then? You’d be a fool not to!