Welcome, once again, friends to the daily Soccerlens World Cup column. I trust you are well?

Here’s the best (and the rest) of today’s hottest South Africa-flavoured potatoes – and I’m afraid that metaphors just don’t get any better than that!

France ‘keeper Hugo Lloris is determined to make sure everybody, and I mean everybody, is aware of just how much he hates the official World Cup ball.

Lloris was the first to criticise the Adidas Jabulani, branding it ‘a disaster’ due to it’s unpredictable flight path, and it seems that a fortnight’s-worth of training with the new ball hasn’t changed the Lyon stopper’s mind;

“[Goalkeepers] need to be even faster in the analysis of the trajectory. I would prefer it if I made a technical mistake – at least I could blame myself.

The ball moves from high to low, from right to left. Even the attackers are embarrassed at the training centres. It is difficult to analyse the point of impact between the ball and the head or foot.

There will be many goals, beautiful and bizarre. The ball is light. It seems that it is made of plastic. It is far from a leather ball. And as you go up in altitude, the more you will have problems.

We all realise that these balls make our task difficult. I must be constantly alert, focused, vigilant and make the correct choices.”

Alright Hugo – you don’t like the Jabulani – we kind of get it now. 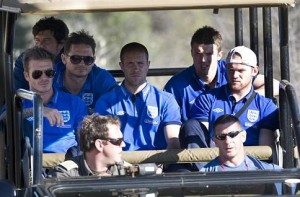 The England World Cup squad took a little time out of their busy schedule to unwind yesterday, when the 23-man group – led by manager Fabio Capello – travelled to (and then through) the Pilanesburg Safari Park (I’m sure there’s got to be a lame ‘three lions’ joke in there somewhere) in search of elephants, unicorns and other such South African fauna.

However, the day threatened to turn sour amidst fears that, in a bout of hi-jinkery, the players had tried to smuggle a sunburnt gibbon past the wardens and out of the game reserve with them – but Wayne Rooney was able to produce his driving license to prove otherwise.

There are more photos here, or a video if you deem still images to be the work of Satan.

England’s official World Cup mascot David Beckham received a verbal ‘slap on the wrists’ (if such a thing exists?) yesterday, after he had the temerity to go against the doctor’s orders and start hoofing a ball around the Rustenberg training pitch.

Becks has been sidelined since March with an achilles injury and was seemingly under strict instructions not to undergo anything more strenuous than a few kick-ups – but try telling that to a man who has built a career on 90-yard cross-field passes. 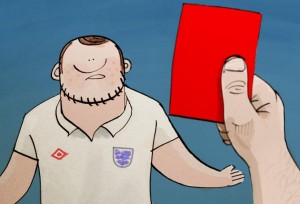 Bored of your average run-of-the-mill common-or-garden fantasy football competitions that reward you and your players for all the usual stuff like goals/assists/actually playing well? Well you might want to give Twatball a go then.

‘What is Twatball?’ I hear you cry. Well I’ll let the bods responsible explain…

“Twatball is a fantasy league game for the football world cup, turned on its head.

Select your dream XI of thugs, cheats and hapless bunglers, then sit back and watch them rack up points for red and yellow cards, own goals, blatant dives and missed penalties.”

Finally, a fantasy football game that Marco Materazzi can excel at. 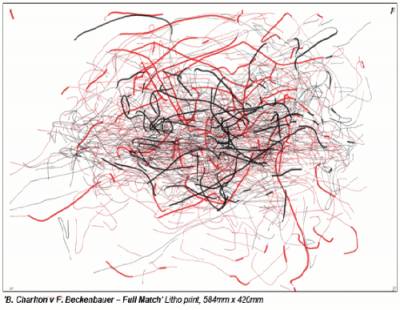 Artist David Marsh has used ‘infographic software’ (answers on a postcard please) to painstakingly map the movements of various players during the 1966 World Cup and create these amazing abstract pieces.

The image above is called ‘B. Charlton vs F. Beckenbauer’ and shows the precise movements made by each player (the thick lines signifying ‘on the ball’ movement and the thin lines showing ‘off the ball’ movements) during the 1966 final.

Marsh created the pieces by watching the game in super slow motion and tracing the players movement onto paper, which he then…hang on, it’d make much more sense if I just let the man himself explain his methods.

Click here for the full interview with Marsh, plus full-size images of his pieces.

Do it, for they are pleasing to thine eye.

“[The World Cup] is an over-hyped, money-spinning festival of tedium in which the world’s thickest millionaires kick a rubbish ball round a poxy field to the wonderment of an audience of foghorning cretins.”

Three foreign journalists have been robbed at gunpoint at their hotel complex in South Africa during the wee small hours of the morning. The thieves got away with laptops, phones, cameras, passports and World Cup press credentials but, thankfully, no one was injured. (Goal)

Portuguese winger Nani has been ruled out of the World Cup after rupturing his left clavicle whilst attempting an acrobatic shot during training last Friday. (Guardian)

Arjen Robben has definitely been ruled out of Holland’s first group game with Denmark on Monday, after twanging a hamstring in a warm-up game with Hungary on Saturday. (BBC)

As a group of great men once said: ‘You need the luck to make a buck, if you wanna be Getty, Rothschild.’

With that said, why not give the Soccerlens World Cup Fantasy Football Challenge a try then? If luck (or judgement) is on your side, you could stand to be £1600 richer by the end of the World Cup.