Morning everyone and welcome, welcome, once again welcome to the daily World Cup column on Soccerlens.

Apologies if none of today’s news makes sense, I think a part of my brain may have died whilst watching a certain game of football last night – I think you can probably guess which one I’m referring to!

After their dismantling of Australia, Germany were riding high coming into their second Group D tie in Port Elizabeth yesterday – and were fully expected to dominate a Serbia side that had struggled to settle during their opening game defeat at the hands of Ghana.

However Raddy Antic‘s side had obviously not read the script, as their bustling performance saw them take – and resiliently hold on to – a narrow one-goal lead.

Germany fought back and were ‘handed’ a golden chance to equalise after Nemanja Vidic‘s baffling handball presented Lukas Podolski with the opportunity to level from the penalty spot, but the Cologne striker’s weak effort was routinely saved by Vladimir Stojkovic.

The frame of the goal then came in for a bit of a battering as the game rumbled on, Sami Khedira crashing a powerful shot against the bar for the Germans before both Jovanovic and Zigic struck the woodwork for the Serbs.

A dramatic late equaliser from Michael Bradley (son of coach Bob) saw the Yanks come from two goals down to secure a hard-fought point in an entertaining Group C tie in Johannesburg.

Two first-half goals from the lively Valter Birsa (a whipped 20-yard stunner) and the not-so-lively Zlatan Ljubijankic (a cool, slotted finish past Tim Howard) looked like being enough to secure the Slovenians a safe passage through to the knock-out stages, but Matjaz Kek‘s men hadn’t counted on what was to follow after the break.

Bradley senior made a couple of attacking changes at half-time and the gamble paid off almost immediately when golden boy Landon Donovan raced clear through the inside-right channel and fired a confident shot into the roof of the net from eight yards out.

The US continued to pen Slovenia back and were rewarded for their continued enterprise when Bradley junior poked home a cathartic leveller in the 82nd minute.

Bradley’s men were then robbed of a winner at the death when referee Koman Coulibaly chalked off Maurice Edu‘s late goal after apparently spying an infringement somewhere in the crowded box, although it only seemed to be the defending side that were guilty of any holding.

“I don’t know how they stole the goal from us. I’m not sure what the call was.”

I’m sure US star Landon Donovan isn’t alone on that front.

England failed (once again) to stamp their authority on the World Cup after failing to come up with anything against a pedestrian, unadventurous Algerian side.

The fact that a pigeon (which perched itself on the back of the goal net) commanded most of the screen time throughout the game was indicative of the moribund display on offer elsewhere on the pitch.

A chorus of boos met Fabio Capello‘s side as they left the pitch after the final whistle, a fitting finale for what was an abjectly woeful, constipated performance.

“It’s nice to see your home fans booing you.”

Just a hint of sarcasm from Wayne Rooney, speaking to the ITV cameras as he left the pitch.

“It is a long way to come out here, they want what’s best for us and we do too. We want to qualify and they want to extend their stay out here and see us go as far as possible.”

Midfielder Gareth Barry looks like he may be starting to finally ‘get it’.

“We’re not happy with the performance, we need more if we want to stay in this tournament until the final stages.

We were not good enough to make the breakthrough in the final third.

We’ve not got any excuses, we know what we have to do. We have to win the final game which adds to the pressure but at this level you have to handle that pressure.

We were not aggressive enough and didn’t have the cutting edge in the final third. Give them [Algeria] credit but we have to look at ourselves.”

By Jove, I think captain Steven Gerrard might be on to something here!

“We’re a great team regardless of what anyone says about this game.”

Jermaine Defoe sticks his ‘rose-tinteds’ on.

“You have to give Algeria credit for making the game as dire a spectacle as it turned out.”

‘Keeper David James. Algeria shouldn’t get all the credit.

“I thought they would be better. I don’t know what happened.”

“Never in the field of World Cup conflict, has so little been offered by so few to so many.”

The Sun channel Winston Churchill to make their point.

A text message I received from my Grandad at the final whistle.

Once more into the breach… 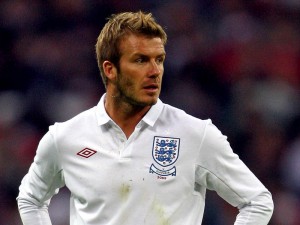 The game that marred my evening was marred itself by a ‘security breach’ that saw an irate fan barge his way into the England dressing room to confront David Beckham.

The FA have officially complained to FIFA after the man eluded security staff before remonstrating with Beckham, who has travelled with the England squad to South Africa despite being injured, minutes after the game had finished in Cape Town.

An FA spokesman confirmed that his organisation are in doubt as to where the responsibility lies;

“A fan got in past FIFA security. We have formally complained to FIFA after the game and will follow it up in writing.

This is not acceptable and thankfully no serious harm was done.”

You can read a little more on the story here. (BBC Sport) 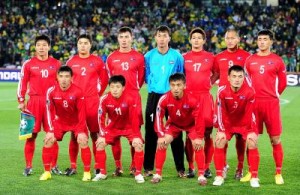 FIFA have insisted they have no idea as to whether four members of the North Korea World Cup squad have gone missing, with reports starting to circulate within various South Africa-based media outlets.

Allegations have surfaced in the press that the players may have tried to defect after the official team sheet for North Korea’s 2-1 defeat by Brazil on Tuesday listed the players Kim Myong-Won, An Chol-Hyok, Kim Kyong-Il and Pak Sung-Hyok as absent.

“We have no information on this – we have only been contacted on this issue by the media. Our media officer with the Korea DPR who has spoken to their delegation completely deny these rumours.”

What could possibly force four men, who have been living under blanket oppression for the best part of their lives, to ‘go missing’ at the first chance they get?

If ITV had broadcast the ’66 final…

Switzerland defender Phillipe Senderos may miss the rest of the World Cup after injuring his ankle attempting to tackle a teammate during the Swiss’ shock win over Spain. (F365)

Injured Italy ‘keeper Gianluigi Buffon is to have surgery on his spine. (Goal)

Holland winger Arjen Robben will be fit (but probably won’t start) for the Dutch when they take on Japan later today. (Guardian)

World Cup winner Nobby Stiles is in ‘good spirits’ after recovering from a stroke. Get well soon Nobby. (Mail)

Today’s (Saturday 19th June) round is as follows:

There will be comprehensive coverage of the World Cup on Soccerlens over the coming weeks.