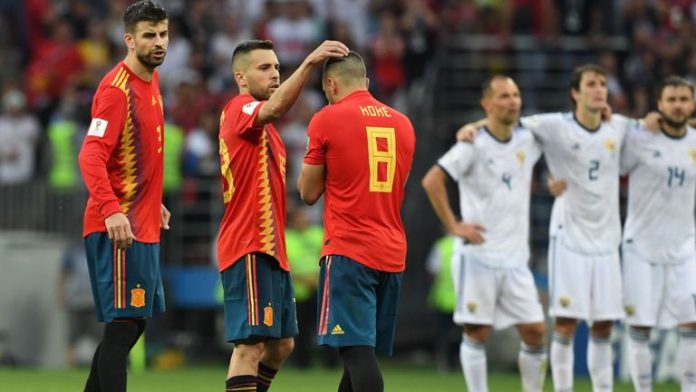 Russia. Sergei Ignashevich. A leg-weary defender who everyone wanted to buy on Football Manager about 15 years ago.

Despite being less than impressive in the group stage Spain were fully expected to sweep past the hosts into the last eight.

Over 1,000 passes later and Spain are on their way home after Russia secured an unlikely penalty shoot-out victory.

Spain pass themselves to death

Spain’s preparations for the tournament were rocked when they sacked boss Julen Lopetegui for failing to tell his federation about his post-World Cup move to Real Madrid.

That decision came back to haunt them as stand-in boss Fernando Hierro struggled to find a solution to Russia’s dogged defence in their last 16 meeting in Moscow.

Spain tiki-takaed their way to a penalty shoot-out against the hosts and ultimately came up short against one of the most defensive teams ever to reach a World Cup quarter-final.

Hierro said: “This is sad – it is the way it is. I’m not holding anything against anybody.

“Nevertheless I do accept responsibility and I don’t avoid blame. We all tried to give it our best, but that’s football.

“I don’t think you can talk about the team breaking down or collapsing. There’s a fine line between winning and losing.”

Russia having a “fantastic” World Cup

Russia defeated Spain on penalties to reach the last eight of the World Cup, although it’s fair to say that their style of play wasn’t exactly pleasing on the eye.

Their success was ugly football personified, but that didn’t worry their rowdy fans who created a superb atmosphere inside the Luzhniki Stadium.

Russia goalkeeper Igor Akinfeev was the hero of the hour, saving two penalties during the shoot-out.

“We were hoping for penalties,” he said. “We are having a fantastic World Cup. Not just our fans, but the fans of other countries are getting a sense of this atmosphere and understood that Russians really know how to play football and want to play football.”

Croatia looked superb during the group stage, but they failed to hit those heights in their last 16 tie against Denmark.

Luka Modric spurned a golden chance to snatch a late winner when his penalty shortly before the end of extra-time was superbly saved by Kasper Schmeichel, but they held their nerve in the shoot-out to edge through.

Croatia coach Zlatko Dalic said: “It was a very difficult game. We conceded in the first minute, then we equalised. We missed a sitter. We miss penalties. We had chances but we stayed strong, mentally composed, and we won eventually.”