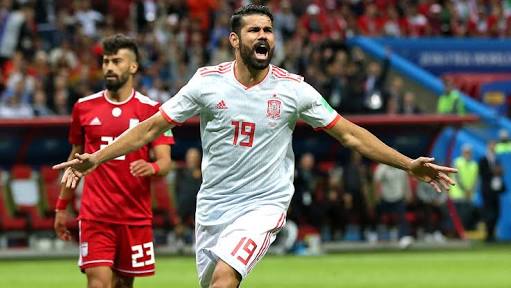 The first week of the 2018 World Cup in Russia has been full of excitement, controversy and goals, with fans hoping the action over the remainder of the competition continues to be as enthralling.

In today’s news, Spain rode their luck to record a 1-0 win over Iran on Wednesday night, while Portugal and Uruguay also prevailed by the same scoreline.

Ahead of three matches on Thursday, France are ready to turn to Olivier Giroud, Messi will be asked to deliver and Kasper Schmeichel has beaten a record set by his famous father Peter.

Spain were expected to make short work of Iran on Wednesday, but a fortuitous Diego Costa goal and a VAR decision to rule out a Saied Ezatolahi equaliser for offside meant it was a close game.

Iranian boss Carlos Queiroz said his players should be proud of their performance and had won the respect of the 2010 world champions.

Elsewhere in Group B, a Cristiano Ronaldo header was enough to grant Portugal a 1-0 win over Morocco, but the Africans can feel aggrieved after losing despite being the better side.

Theatrics from Pepe epitomised the Iberian nation’s use of the dark arts, while some excellent stops from Rui Patricio ensured victory.

Finally, Uruguay are through to the round of 16 and will play their final clash against Russia to see who tops Group A following a 1-0 win over Saudi Arabia.

Luis Saurez netted the only goal of the game in a relatively bland affair.

In a slightly odd piece of news, England manager Gareth Southgate has dislocated his shoulder while jogging on Wednesday near the team’s base in Repino.

“I might not be celebrating any goals as athletically in future,” he said, after being released from hospital.

“The doc has made it clear that punching the air is not an option. It is better this is me than one of the players.”

Meanwhile, Dele Alli has taken to Twitter to state he is doing “everything in his power” to be fit for England’s clash with Panama on Sunday.

The Tottenham Hotspur attacker picked up a quad strain against Tunisia and is expected to be replaced by Ruben Loftus-Cheek in England’s next game.

The Leicester City stopper is 533 minutes without conceding a goal after a shutout in the 1-0 win over Peru – which took him past a national record previously set by his father, Peter.

France are back in action against Peru and the Guardian suggest Didier Deschamps is ready to give Olivier Giroud a place in his starting XI for the clash.

Les Bleus were one of the pre-tournament favourites but toiled to a 2-1 win over Australia in their opener, raising pressure on their team and manager.

Finally, Lionel Messi will be in the spotlight as Argentina take on Croatia in what looks like a match to decide the potential Group D winners.

The Barcelona forward missed a penalty in his side’s 1-1 draw against Iceland – surely he won’t have two bad games in a row?

Fancy yourself as knowing a thing or two about the World Cup? Get involved in the Sportslens Predictor competition for a chance to win a 50-inch television.