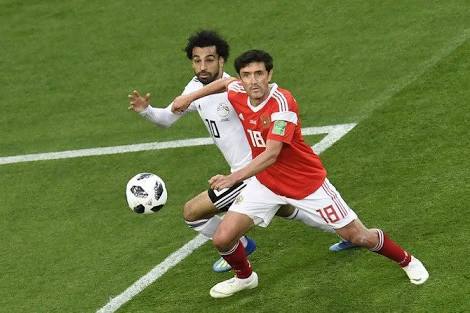 The second round of group fixtures at the 2018 World Cup started on Tuesday night, with Russia recording an impressive 3-1 win over Egypt, effectively booking their place in the round of 16.

In today’s news, Pharoahs coach Hector Cuper has bemoaned Mo Salah’s less-than-ideal competition preparation and we look at a change England will make for their game against Panama.

Elsewhere, there are three games on Wednesday and the fight for the Golden Boot is heating up.

Russia were not overly fancied ahead of the tournament starting, but the hosts have been excellent so far – with a win over Egypt the latest achievement.

Strikes from Denis Cheryshev, Artem Dzyuba and an Ahmed Fathi own goal were enough to secure a 3-1 victory and all-but eliminate Egypt from the tournament.

Hector Cuper has lamented Mo Salah’s lack of pre-tournament fitness and stated the Liverpool star, who scored a penalty in the loss, was still suffering after being injured in the Champions League final.

“We all know what Mo Salah means for the national team – he is a crucial player,” he said.

“I was told the player was feeling good. He couldn’t prepare with us in all the sessions, had to train alone, so perhaps his total physical ability was slightly reduced.”

Egypt will be eliminated if Uruguay beat Saudi Arabia, as expected, in Group A today.

Loftus-Cheek to start vs Panama

Tottenham Hotspur midfielder Dele Alli will not be fit to face Panama on Sunday and will be replaced in the England starting XI by Ruben Loftus-Cheek, according to The Guardian.

The Spurs attacker picked up a quad strain in the 2-1 win over Tunisia earlier this week and was relatively ineffective as a result.

Loftus-Cheek has impressed when handed cameos for England and will look at the opportunity to play against a weak-looking Panama team as a chance to cement a place in the team for the rest of the World Cup.

Russia’s Denis Cheryshev, who started the tournament as a substitute, registered his third goal of the World Cup in the win over Egypt and is now an unlikely contender for the Golden Boot – with his nation not missing the injured Alain Dzagoev as a result.

Cristiano Ronaldo will look to add to his hat-trick against Spain as Portugal return to action tonight against Morocco in Group B, while Spain are also in action against Iran.

England striker Harry Kane, who netted a brace against Tunisia, is also talking up his chances of winning the individual crown.

“To be the best player in the world you have to aim high, you can’t aim low,” he said.

“I had to prove people wrong throughout my career and I love proving to mysefl that I can do it.

“Ronaldo is the best in the world, up there with Messi, but the challenge is there to be with them.”

How are your predictions going? Get involved in the Sportslens Predictor competition to win a 50-inch television.