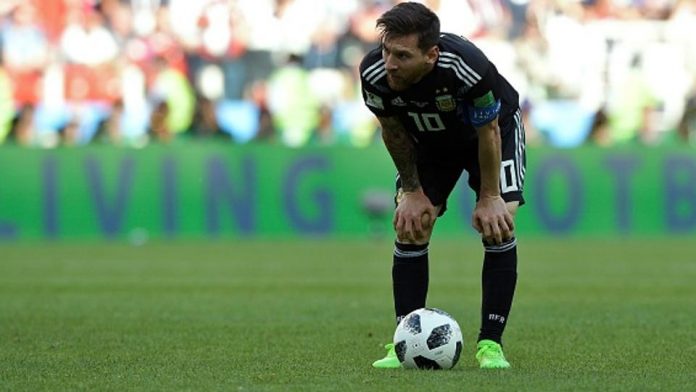 The 2018 World Cup’s longest day took place on Saturday, with four games played in Russia for fans to enjoy.

In today’s news, we recap the action – with VAR causing a controversy and Lionel Messi in the spotlight.

Ahead of today’s action, there are fitness updates on Manuel Neuer, Mesut Ozil and Neymar.

The use of Video Assistant Referees in club football has split opinions across the globe, with the technology making a telling entry into the World Cup on day three.

France were awarded a penalty on retrospect after Josh Risdon’s challenge on Antoine Griezmann, when initially the referee had waved play on.

The Atletico Madrid attacker duly dispatched the resulting spot kick to give his side the lead and play a role in a slightly fortuitous 2-1 win over Australia.

Socceroos goalkeeper Mat Ryan was despondent after the game.

“I feel hard done by – I don’t feel we were beaten by a better team but almost by technology a little bit,” he said.

Peru were also awarded a penalty in their defeat to Denmark, but Christian Cueva could not take advantage from 12 yards, blazing his effort over in a 1-0 defeat for the South Americans.

VAR was supposed to ensure more consistency from the refereeing but the reality is that these tight decisions are still open to interpretation.

The fact that Argentina were not awarded a penalty when Christian Pavon was clipped in their 1-1 draw with Iceland shows there is still no uniformity in decision making at the highest level.

When it comes to Argentina there are two common perceptions – the side is unbalanced and they rely on Lionel Messi.

Both points were proven in their 1-1 draw with Iceland, with failure to record victory largely down to the Barcelona attacker having an off day.

Messi missed a penalty in a frustrating outing for Argentina, who dominated the game but could not deliver the killer blow to record victory.

Despite the diminutive attacker not being at his best, national coach Jorge Sampaoli defended his talisman after the game.

“It was an awkward game because Iceland played in their own half, blocking Messi’s outlets,” the Argentina trainer said.

“He kept looking and he wanted Argentina to win, whatever the analysis of any performance says. I am happy because I know that Leo’s commitment to getting us into the next round is still there.”

The level of expectation on Messi’s shoulders is unfathomable and with Croatia beating Nigeria 2-0, Argentina face a battle to get out of Group D.

Germany and Brazil to enter the fray

Sunday’s action sees two of the tournament favourites enter the World Cup action, with both Germany and Brazil to play their first matches of the competition.

The reigning champions will take on Mexico in Group F and have been boosted by news that key men Manuel Neuer and Mesut Oil are both fit to feature.

“Neuer is making a very stable impression on me. The last few weeks he has been very focused, very calm, he has worked hard to come back,” Germany coach Joachim Low said.

“All players are fit. Mesut Ozil has put in two additional training sessions this week.”

Meanwhile, Brazil should be able to call upon key man Neymar for their Group E clash with Switzerland, but coach Tite has admitted the PSG forward is still recovering from a foot injury.

“Neymar is still not 100 per cent, but he is very privileged physically,” the Selecao coach said.

“The level he has displayed in his sprints in high velocity has been impressive. But still he has something to gain. It should happen sooner rather than later, hopefully.”

In Sunday’s other game, Serbia and Costa Rica will battle it out in Group E.

Do you want to win a 50-inch television? Get involved in the Sportslens Predictor competition during the World Cup.