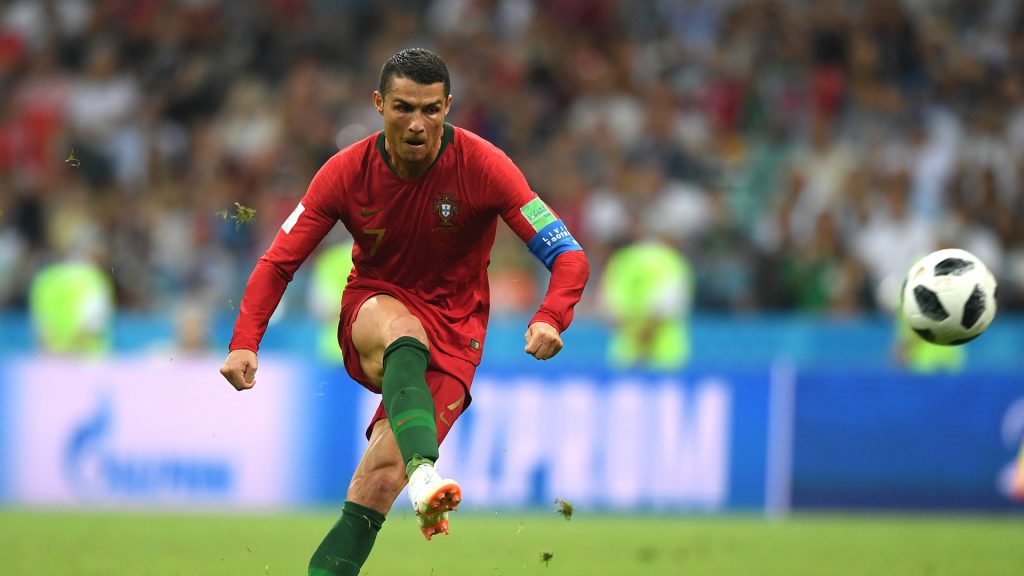 It was an action-packed second day of the 2018 World Cup on Friday, with three games producing eight goals – fans are now waiting in anticipation ahead of four clashes on Saturday.

In today’s news, one of Spain’s main players has slammed Portugal’s hat-trick hero Cristiano Ronaldo for diving and Luis Suarez has been defended after the Uruguay striker had an off day against Egypt.

Meanwhile, Lionel Messi has been speaking about his Argentina future ahead of the South Americans starting their campaign against Iceland on Saturday.

A wildly entertaining Iberian derby between Spain and Portugal on Friday saw the spoils shared in Group B, with a Cristiano Ronaldo hat-trick counteracting a beautiful Nacho strike and a Diego Costa double.

The Real Madrid attacker scored a sublime direct free-kick to ensure the game ended all-square, but Gerard Pique has questioned the Ballon d’Or holder’s conduct in winning the set piece in the first instance.

“We have had more chances. They had three shots and scored three goals,” the Barcelona centre-half said.

“Games go one way and you have to face it. Finding yourself in the opening game of a World Cup with a penalty against you in the second minute, you have to leave with good feelings after how the match went.

“Cristiano is prone to diving.”

Ronaldo was in buoyant mood after the game, in which he scored his 51st career hat-trick.

“I am very happy, and I always believe in myself,” he said.

“It is one more [hat-trick] in my career but the most important thing to me is to highlight what the team has done.”
Portugal’s second goal came courtesy of an uncharacteristic David De Gea error, but the Spain stopper was defended by

Manchester United manager Jose Mourinho, who said he found it hard to watch the goalkeeper’s mistake as the player was “his boy”.

Uruguay won their opening game of the World Cup 1-0 against a Mo Salah-less Egypt, but had to call on a late header from defender Jose Maria Gimenez to record all three Group A points.

Luis Suarez had a number of excellent opportunities to score for the South Americans, but fluffed his lines, with the Barcelona centre forward and fellow attacking superstar Edinson Cavani failing to click.

Despite his star man not converting the chances presented to him, Uruguay boss Oscar Tabarez has backed the striker to excel in the rest of the tournament.

“I’ve seen Messi and Pele and Maradona and other great players not to playing to their full potential in matches. This is not a sin,” he said after the win.

“Even playing not as well as he normally plays, he had three goal scoring opportunities and the Egyptian goalkeeper stopped two of them. A lot of credit goes to him for that. This doesn’t bother me at all. I’m not worried.”

In Friday’s other game, Iran weathered an early Morocco storm to win 1-0 in Group B, courtesy of a calamitous injury time Aziz Bouhaddouz own goal.

Saturday has four games to be played, in what promises to be a footballing feast, with all eyes on Lionel Messi as Argentina enter the World Cup against Iceland.

With the South Americans looking vulnerable in the competition lead-up, as ever it will be down to the Barcelona man to inspire those around him – something he is unsure if he will be around to do in four years’ time.

“They ask me if this will be my last World Cup and I don’t know,” Messi said ahead of the game.

”I’m not thinking about that now. It will surely depend on how this month goes, on how we finish in the tournament.”

After Ronaldo’s hat-trick on Friday night, perennial personal rival Messi will be keen to prove himself also.

In the other games, France take on Australia and Denmark face Peru in Group C, while Croatia and Nigeria round-off the action in Group D.

Have you picked correct results so far? Check out the Sportslens Predictor competition for your chance to win a 50-inch television.