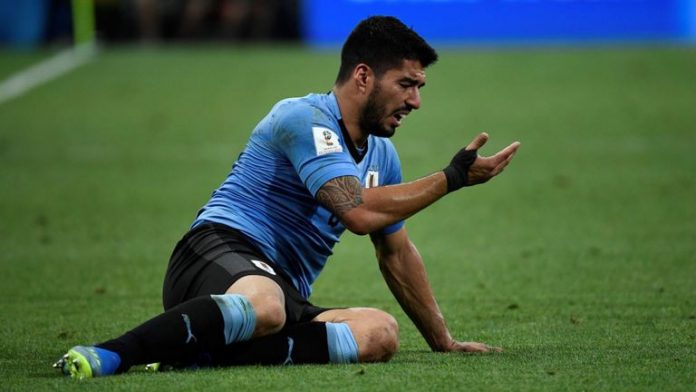 We’re down to the last eight in the World Cup and just two points covers the top three players in the Sportslens Predictor competition.

With three of the four ties looking tough to predict, the competition looks set to go right down to the wire.

Following the excitment of England’s dramatic shoot-out victory over Colombia on Tuesday, the remaining teams in the tournamnet have been having a well-earned rest ahead of Friday’s first two quarter-finals.

Godin is the godfather of Griezmann’s daughter and the French star has said that he feels “part Uruguayan”, but Barcelona striker Luis Suarez has dismissed the idea.

“He is French and he doesn’t know what it is to feel Uruguayan,” he said.

“He doesn’t know who we are or what we must do to be successful in football. He enjoys our customs and can speak the same language – but we feel differently.”

Willian is desperate to secure the bragging rights over Chelsea teammate Eden Hazard when Brazil take on Belgium in the second quarter-final on Friday.

The Brazil forward has had an impressive tournament and he is aiming to continue his good form when he faces Hazard’s side.

“He is a very humble player and I like being with him on a daily basis at club level,” he said.

“But now it is time for each of us to defend our corner and I hope to come out on top. He is one of the best players in the world, but now I am on a different side and I want to do everything to win.

“I know we will remain friends after.”

Wise backs England to go all the way

England take on Sweden on Saturday aiming to continue what is turning into a memorable World Cup for the Three Lions.

Striker Harry Kane is leading the race to win the Golden Boot and former Chelsea star Dennis Wise has praised his contribution to England’s progress.

“He is world class, for sure.” he said. “You look at the four penalties he’s scored. He’s changed his way of doing it and hits it with such accuracy and power.

“He’s got this inner belief in himself. He shows it in his actions and he’s been fantastic leader so far. He’s been absolutely outstanding.

“His hold up play is outstanding and invites fouls and that was important to slow things down late in the game. He’s very bright.”

Kokorin dreaming of the final

Russia face Croatia in the last quarter-final game on Saturday and their unlikely run to the last eight of the tournament has captured the imagination of the country.

Croatia are big favourites to reach the last four, but star Zenit St Petersburg star Aleksandr Kokorin insists that Russia can spring another surprise following their shock win over Spain.

“The Croatian team have looked good, but the Russian team do have the momentum to reach the semi-finals and then the final.” said Kokorin.