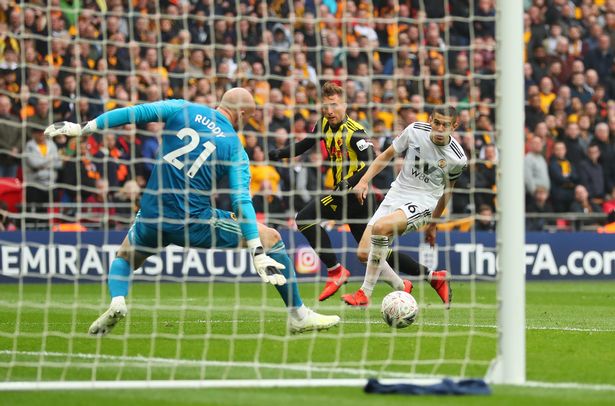 Wolves crashed out of the FA Cup after a defeat against Watford in the semifinals of the competition.

Doherty and Jimenez scored to give Nuno’s side a healthy 2-0 lead. However, the Hornets did very well to get back into the game and win it in the end.

Deulofeu and Deeney scored late on to secure Watford’s place in the final.

The fans will be bitterly disappointed with the way Wolves threw away the lead in an important game.

The Molineux outfit have been fragile at the back all season but John Ruddy let his team down yesterday more than anyone else.

The 32-year-old Wolves keeper had a poor outing and he should have done better for Deulofeu’s goals.

Nuno trusted his back up keeper to do the job against Watford and it has proved to be very costly. Patricio would have done better and Wolves might have made it to the finals with him in goal.

Wolves fans have reacted to Ruddy’s display on Twitter and here are some of the reactions.

Any decent goalkeeper would’ve save that. He stayed in the same place instead of diving for it

This season has been the best season I’ve ever seen supporting the wolves, likely top 10 finish and fa cup semi final for a newly promoted side sounds very good to me, I will always love you wolves, please get rid of John ruddy though

Ruben Neves is a fraud
Raul Jimenez is a fraud
Matt Doherty is a fraud
John Ruddy is a fraud
and the frauds are leading with a chance to go to an FA Cup Final
And I, the biggest fraud of all, am fucking buzzing
30 more minutes let’s fucking go

Nuno is only guilty of one thing today. Blind loyalty to a crap John Ruddy