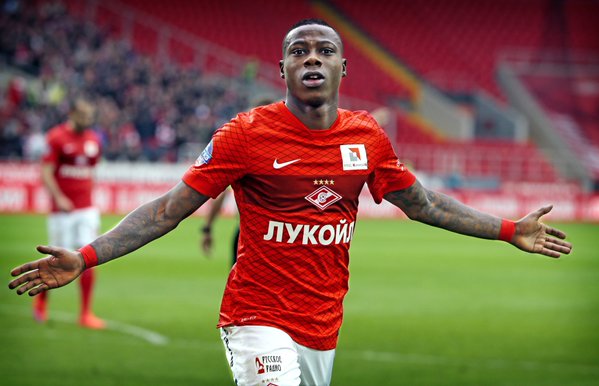 Liverpool boss Jurgen Klopp is a huge admirer of Quincy Promes. He had tried to sign the Dutch winger when he was in charge of Borussia Dortmund. Klopp still retains that interest in Promes, and the Reds are ready to launch a £20m bid to land the Spartak Moscow winger in January.

Georginio Wijnaldum, the Liverpool midfielder, has expressed his desire to see his national teammate, Promes, join him at Anfield. The former Newcastle midfielder believes his compatriot has what it takes to improve Liverpool in the second half of the season, as the Reds are aiming for a shot at the Premier League title.

Wijnaldum said, as quoted by the Mirror:

Of course I want him to come to Liverpool because I know he is a good player and also a good person who can help the team.

I think he knows how great Liverpool is — I knew it before I came here. I don’t know if everything is true about what they say as I don’t speak with him about that.

It is something for the manager and the scouts, not for me. I just read it in the papers or on the Internet.

The 24-year-old winger stunned everyone when he joined the Russian club in 2014, which many saw as an unconventional move for a young player. However, he quickly rose to prominence at Spartak and kept doing what he had always done: score goals and provide assists. He has been the club’s top goal scorer for each of the past two seasons. In total, he has scored 37 goals in 78 appearances for the Russian club in all competitions.

Promes is a versatile attacker who has played in different positions across the midfield and the front line. However, he enjoys mostly playing at right wing. With Sadio Mané about to depart to the Africa Cup of Nations (Afcon) for a month, Klopp is looking for a wide midfielder who can equally operate along the front line, and Promes fits all the criteria.