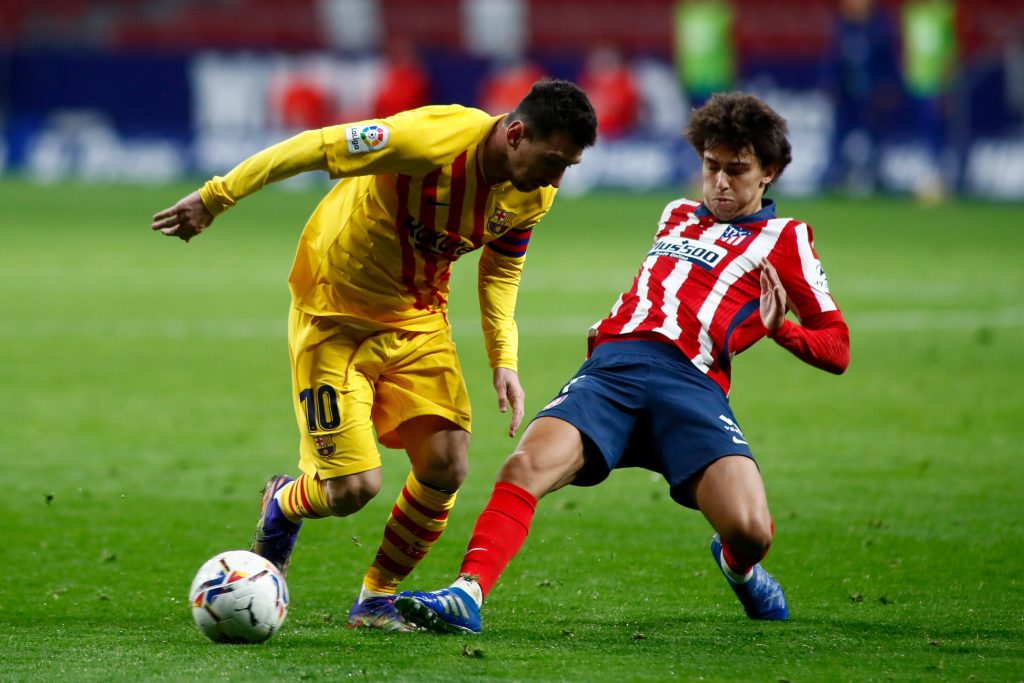 With Atlético Madrid, Barcelona and Real Madrid all winning in match week 28, the La Liga Santander title race is well and truly on as the top three enter the final 10 games of the season.

With just six points separating Atlético from Real Madrid in third (La Liga table), Sportslens takes a look at each of the title hopefuls’ run-ins, assessing where opportunities and challenges lie ahead.

Talisman Luis Suárez scored the only goal of the game, whilst also reaching a career milestone of 500 league goals.

The veteran striker has been influential for Los Colchoneros this season since his arrival from Barcelona, with the Uruguayan’s 19 league goals in 25 appearances second only to Lionel Messi’s 23.

Atlético face four tough fixtures in their remaining 10 league outings with Sevilla, Athletic Bilbao and Europe-chasing Real Betis still to play, as well as a crucial showdown with Barcelona.

Suárez will be keen to add another La Liga medal to his collection as he enters the twilight of his career, and there is no doubt Atlético will be relying on his goals for the final hurdle of the season.

Marcos Llorente has also been a standout performer for Atléti this season, with his nine league goals and eight assists resulting in him becoming a mainstay in midfield alongside club captain Koke.

Jan Oblak’s late penalty save against Alavés last week was a gentle reminder to anyone doubting the Slovenian’s world-class goalkeeping abilities.

Atléti’s number one currently leads the race for this year’s golden glove with 14 clean sheets, and his 74 saves this season are bettered only by Valencia’s Jaume Doménech and Elche’s Edgar Badia.

The league leaders currently sit four points clear of Barcelona in second, and with no Copa del Rey or Champions league distractions, their fate lies in their own hands.

With the season’s second El Clasico still to be played on April 10 at the Santiago Bernabéu, Barcelona or Real are certain to drop points, posing as a clear opportunity for Atlético to strengthen their position at the top of the league standings.

Los Colchoneros’ spine of Oblak, Llorente and Suarez will look to be the driving force in Atléti’s pursuit of the La Liga crown for the first time since the 2013-14 season.

Spearheading Barcelona’s return to league form is none other than Lionel Messi, with his two goals against Sociedad meaning the Argentine has had a goal contribution in each of his last 14 La Liga appearances – 18 goals and eight assists.

Since the turn of the year, Barcelona have made La Liga news headlines for all the right reasons – despite the Champions League hiccup, Barca have won 11 of their 12 league outings, and Ronald Koeman has found recent success in a 3-4-2-1 setup.

Jordi Alba and Sergiño Dest have been influential down either flank, whilst emerging talent 18-year-old Pedri’s impressive performances this season, have led to his first call-up to Spain’s senior squad.

With Gerard Pique’s return imminent, the Spaniard will provide added assurance to Barca’s back three, whilst allowing Frenkie de Jong to return to his natural midfield position.

The Catalans have rediscovered their form in a pinnacle stage of the season, knowing they cannot afford any slip-ups as they were prone to earlier on in the campaign.

Crucial games against both Atlético and Real are still to come, and Koeman and his men will know maximum points will be needed from each.

The Catalan giants were beaten 3-1 at the Camp Nou by Madrid, whilst also losing 1-0 at the Metropolitano earlier in the season to Atlético.

Barca’s record against their title rivals is a cause for concern, but currently boasting the strongest run in league form, they will be quietly confident of seeking revenge in both reverse fixtures.

The Copa del Ray Final against Bilbao is sandwiched between the El Clasico and a visit from Getafe.

Squad rotation will be vital, with their showdown with Real and Getafe crucial in keeping the pressure on Atlético, whilst Koeman will know the Copa del Ray final poses as a clear opportunity for silverware which the Barca hierarchy will be expecting.

Real Madrid are currently the last of the chasing pack, six points adrift of bitter rivals Atlético, and face the hardest run-in out of the three sides.

Five of their last ten outings feature against teams in the top half of the La Liga table, with Sevilla, Granada, Athletic and Villarreal still to play, as well as a season-defining El Clasico in just over a fortnight.

With ground to make up, Zidane and his men will be treating every game as a cup final.

However, the reigning champions are no stranger to a title fight, and Los Blancos 10 consecutive wins at the end of last season led to them claiming the La Liga Santander crown.

Madrid have been keen to thrust a crop of emerging young talent into their side this season as a new dawn beckons, with the likes of Federico Valverde, Vinícius Júnior and Mariano Díaz enjoying plenty of game time.

But as the season reaches its pinnacle stage, it is the senior players leading by example.

Karim Benzema has 17 league goals to his name, surpassed this season only by Suarez’s 19 and Messi’s 23, and has started 24 of his sides 28 league games this campaign.

Toni Kroos sits top of Madrid’s assist chart and has completed the most passes, with Luka Modric a close second.

Carlos Henrique Casemiro has the most recoveries for Los Blancos, and the veteran Modric once more occupies second spot.

Madrid remain the only Spanish team left in the Champions League, and face Liverpool in the two-legged quarter-finals, a repeat of the 2018 final in Kiev.

With their congested fixture list flooded with a series of stern tests along the way, nerve and discipline will be vital, and for Madrid’s older players the challenge that lies ahead is nothing they have not seen before.

After claiming the bragging rights in the first El Clasico earlier this season, Madrid will be confident of claiming the double over Barcelona when the two sides meet at the Bernabéu.

A showdown between Atlético and Barcelona before the end of the campaign means at least one of the two teams will drop points. If Madrid are able to replicate their end of season form from last year, we could have a thrilling title race stretching to the very final day.

Who do you think will win the 2020/21 La Liga Santander title? Let us know on Twitter.