India
Home News what went wrong for liverpool against sunderland 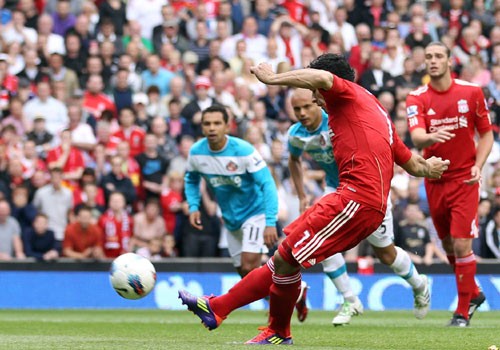 This match refers to an older game. Go here for the latest Liverpool v Sunderland news.

Manager Kenny Dalglish unleashed his 100 million worth signings against Sunderland, still Liverpool were only able to earn a single point from the game. After an impressive first half of dictating the play, Liverpool somehow completely turned off in the second one. The woeful defensive concerns remain the same however they should have finished off Sunderland, instead yet another shabby start to the new season has left the fans disappointed.

Dirk Kuyt had started every single competitive match under Dalglish but this time Kenny opted to hand the 20 million signing an unenviable start against his former team, however he could not deliver. Henderson did a lot of running with energy but nothing eye catching. Arguably he was the weakest link in Liverpool’s attack even in their first half domination. Kuyt’s experience and untiring work rate at the right could have provided them with more firepower to see off Sunderland, instead he was introduced when the team were not interested in “pass and move”.

Why was Aquilani not included in the squad? A question asked by many but perhaps would be answered by none. When you substitute the best player “Suarez” you need to bring in someone who’s creative enough to make the difference. Although Meireles isn’t bad and was the only attacking option left on the bench still he didn’t take part in a single pre-season match with the new look Liverpool squad due to injury. Given 15 minutes but was nowhere to be found near the ball. The decision to include Meireles who played mere one half for Portugal during the week and omit in-form Aquilani who by far was their best player of the pre-season did not make much sense.

If Martin Kelly was fit enough to be on the bench then he was certainly fit enough to play as well. Right from the start of second half Flanagan was looking shaky. Beaten easily more than a few times and was losing his confidence. His blunder was punished by Larsson when he scored a stunning equalizer in the 57th minute. Kelly was not introduced even then and in all fairness Liverpool could have easily ended up on the losing side as well when Sunderland piled up pressure at the later stages of the game.

“Long Balls” over “Pass and Move”

Last season, whenever Suarez was not on the field, Liverpool normally played long balls towards big Andy Carroll. Here, we saw dazzling eye catching moves in the first half but after conceding, Liverpool again looked more interested in launching long balls to Carroll who was handled well by Wes Brown instead of playing much effective pass and move game. Brilliant crosses are more productive with Carroll’s presence but Long balls are a major hindrance as seen that they were not able to threaten Sunderland in the second half.

Next up for Liverpool is the visit to the Emirates Stadium where they have never won. Arsenal might not have Fabregas and Nasri, still Liverpool need to step up immensely after dropping points at Anfield.