West Ham will entertain Aston Villa at the Upton Park on Saturday in the Premier League where Villa manager Paul Lambert will be hoping for their second away victory in London this season. 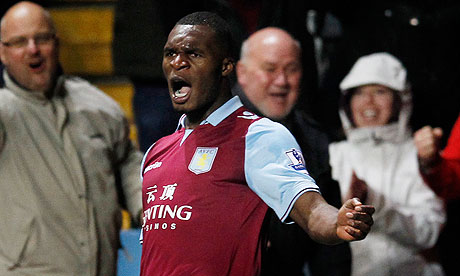 The Villans have been handed a tough set of fixtures to deal with. They have already faced six of last season’s top seven teams in their first nine games. Lambert will be happy with his team’s performance so far, having seen his side earning great results against top teams like Arsenal and Manchester City. Their away form is better than their home record which puts Villa in a slightly favourite position ahead of the match.

Their counter-attacking style has suited them better playing away from home but it’s the same old problem of consistency that is hurting them badly.

West Ham’s story is more or less on the similar lines as well. The Hammers have earned a great victory against London rivals Tottenham Hotspur but their strike-less formation has backfired against Manchester City and Swansea.

Their present campaign has been marred by lack of alternatives in their attacking plans. The absence of Andy Carroll has disrupted their system completely and it seems like Allardyce has no plan B left to counter the problem. They now lack a focal point in the attack and as a result of which Carlton Cole has been re-signed but is still building up his fitness. Their problem is further compounded by the absence of Ricardo Vaz Te who is also on the sidelines through injury.

West Ham will face further injury problems as Matthew Taylor and Mladen Petric have become the latest casualties, while Sam Allardyce feels Carlton Cole is not yet ready for Premier League start.

Likewise, for Villa, Gabriel Agbonlahor is still nursing his ankle injury and is unlikely to take part in the match. Left-backs Antonio Luna (hamstring) and Joe Bennett (back) are both sidelined.

Prediction: 0-1. The Villans are 11/5 to win the match with Ladbrokes against West Ham on Saturday.