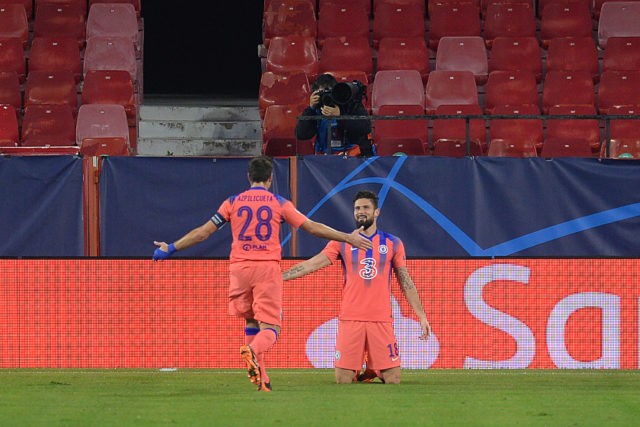 Chelsea striker Olivier Giroud has no shortage of admirers, with Tottenham Hotspur and West Ham reportedly vying for his signature.

The 34-year-old striker has dropped down the pecking order at the Blues this season behind Timo Werner and Tammy Abraham. Although Frank Lampard wants him to stay, the Frenchman could look to move elsewhere in January in order to play regularly.

According to TalkSport, Giroud – who scored all four goals in Chelsea’s 4-0 win over Sevilla in the midweek – has been targeted by London rivals West Ham and Spurs.

There has been interest in him from foreign clubs, but West Ham could be an attractive destination as David Moyes is reportedly a big fan of the player.

Many Hammers fans have taken to social networking site Twitter to express their opinion about whether Giroud is needed at West Ham. There are certain fans who feel that the former Arsenal striker has plenty to offer, even at this age, and could be a fantastic addition for the club on a short-term deal.

Yes, Giroud benefits powerful midfield of chelsea and we use 5 back and shortage of offensive line

Massive upgrade on Haller in every aspect except age

Too old yet is capable of scoring 4 goals in 1 champions league game. Are you feeling okay?

I'd take him on loan but that's it

However, there are other sets of fans who feel that the club should look for options elsewhere, considering his age. While Giroud’s ability isn’t in question, fans feel that West Ham should look to sign young talented strikers instead.

No,because Chelsea will rice in the deal

No thanks , too old

Will Giroud be a good signing for West Ham?

Yes. The Hammers are doing well under David Moyes and Giroud will add quality to the side. He would come on the cheap, although West Ham may need to meet his high wage demands.

Giroud is primarily seen as a striker who can be used as a target man – in reality, he brings a lot more to the side. He still has the desire to contribute regularly, and his performance against Sevilla proves that he still has enough football left in him.

At West Ham, Giroud can expect to play regularly, and he would jump at the opportunity if presented. On top of that, he doesn’t have to leave London (where he is comfortably settled), which could be a major incentive in deciding his next club, if he at all leaves Chelsea.