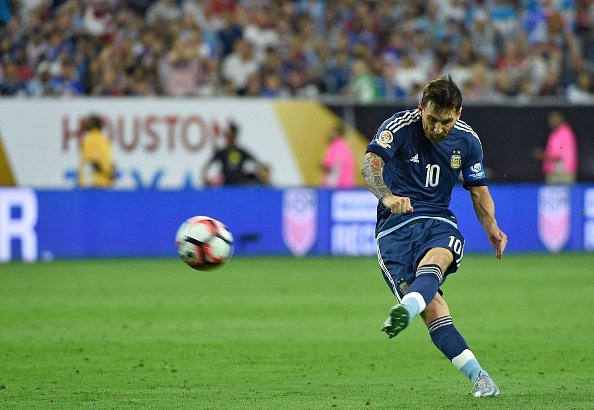 Argentina booked their place in the Copa America final after demolishing the US 4-0 on Tuesday night in Houston. Lionel Messi scored one and set up two goals as the Albiceleste made it to the final for the second successive Copa editions.

Jurgen Klinsmann had to make several changes to the starting line-up following suspensions to some of his key players: DeAndre Yedlin returned to left back position after missing out the quarter-final tie against Ecuador through suspension. Kyle Beckerman was brought in, while Chris Wondolowski partnered Clint Dempsey up front in a 4-4-2 system.

Gerardo Martino’s side took an early lead, with Ezequiel Lavezzi finding the net with a looping header from a delicious Messi chip in the US penalty box within just five minutes.

Argentina dominated possession and nearly extended their lead after Messi had hit a brilliant 20 yards strike that forced Brad Guzan into a save.

Just after the half-an-hour mark, Messi put Argentina 2-0 ahead with a majestic free-kick from 30 yards out. The Barcelona superstar curled into the upper right corner leaving Guzan no chance of saving that. The goal holds an extra importance in terms of Messi’s personal landmark as he becomes the new leading goalscorer for his country with 55 goals, breaking Gabriel Batistuta’s record.

After the break, Argentina dashed all hopes of a US comeback with a quick early goal. This time, Gonzalo Higuain, a reported £85m Manchester United target, fired a shot from close range to make it 3-0.

The goal came to a huge blow for the US who by now had lost all hopes of a possible comeback. They looked disjointed and failed to muster any constructive attack on the opposition half.

And Argentina put the final nail in the coffin after Messi picked up a loose ball just outside the Americans’ penalty area and squared it off for Higuain, who made no mistake in slotting home from close range.

Argentina will face the winner of Wednesday’s other semifinal between Chile and Colombia in the final. Check all the goals and highlights below: