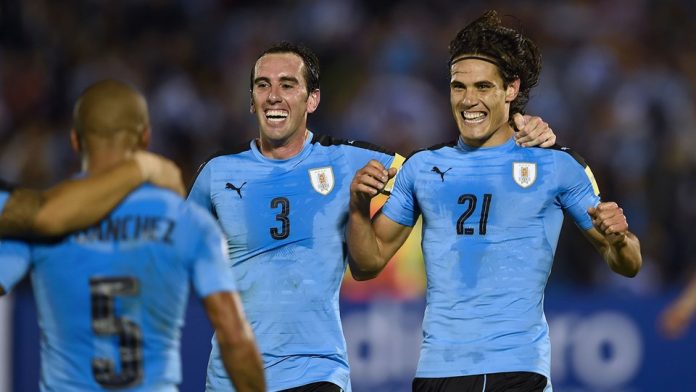 After finishing second in the always competitive South American qualifying campaign, Uruguay head to the World Cup with a quiet optimism.

With a pool of modest opponents to play in Group A also, Uruguay will look to progress to the knockout stages and make an impression in Russia.

There are no surprises in the Uruguay squad for the competition, with the majority of the selected players part of the senior set-up for a considerable amount of time.

Uruguay’s squad has virtually picked itself, with injury to Alvaro Pereira the only minor blight on the selection process.

Strikers Abel Hernandez and Diego Rolan miss out due to the quality the South American nation possesses in attacking areas.

Veteran Tabarez has been in charge of the Uruguayan national side since 2006, with this competition surely the last hurrah for the 71-year-old.

The experienced trainer has done a major job in bringing Uruguay to the forefront of the global game, leading the country to a fourth-placed World Cup finish in South Africa in 2010 and winning the Copa America in 2011.

Tabarez’s familiarity with his players will be an advantage for Uruguay but it remains to be seen whether the long-serving coach will continue picking older heads in certain positions or look to bring in more youthful options.

Uruguay will field a bespoke 4-4-2 formation at the World Cup, with Cavani and Suarez leading the line.

While both operate as number nines for their respective clubs, the Barcelona man looks to drop slightly deeper to link play for his country.

Uruguay boast a tough-tackling central midfield, with Inter Milan’s Matias Vecino in the side to try and win back possession and spring counter attacks.

In wider areas, the Celeste have traditionally played with attacking full-backs but the personnel available to Tabarez in these position is ageing.

While Godin is a lynchpin at the back, Uruguay will be dependant on Suarez to provide the firepower needed for the side to make an impression in Russia.

The South Americans will be confident of making it through Group A, but will most likely face Spain or Portugal in the next round – where the Barcelona forward will be asked to inspire from the front.

At 31 this could be Suarez’s last World Cup but there is little contesting the fact that he is a world-class centre forward on his day.

How he links up with Cavani, who plays in a similar fashion to him at club level, will dictate just how dangerous Uruguay are in Russia.

Uruguay have a handful of impressive young players coming through the ranks and ready to take over the reins of the national side – none more so than Rodrigo Bentancur.

The technically gifted midfielder excelled in the national under-20’s outfit and for Boca Juniors in Argentina, earning a high-profile move to Italian giants Juventus last year as a result.

While competition for places in Turin is intense, Bentancur has held his own and featured in Serie A and the Champions League throughout 2017-18.

Whether he starts for Uruguay or not at the World Cup remains to be seen, but the 20-year-old’s range of passing and ability on the ball could be crucial in providing chances for Suarez and Cavani.

On any given day, Uruguay have the potential to beat anyone in the competition due to their attacking talent and experience.

However, consistency has been the issue for Tabarez’s men in recent years and could again be their downfall in Russia.

Uruguay will be favourites to win Group A but with ominous potential opponents awaiting them in the round of 16, that may be as far as they get.