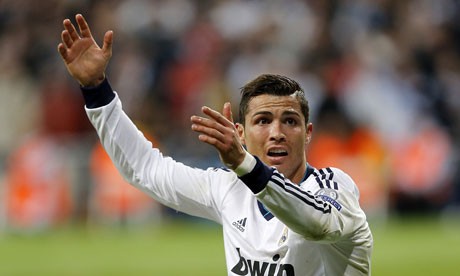 Manchester United could well be looking to bolster their attack this summer with Wayne Rooney’s future up in the air, and a dream move for all those concerned with the club would be the resigning of former star Cristiano Ronaldo. Despite CR7 being one of the best players in the world game, he seems restless at Real Madrid.

The Portugal international stated earlier in the season that he was ‘sad’ at the Santiago Bernabeu, sparking rumblings that he could well leave the Spanish capital. With Los Blancos also thought to be weighing up a move for Brazilian superstar Neymar this summer, Ronaldo’s future is still unclear.

The latest prognosis on the situation was aired in The Guardian yesterday, with Ronaldo thought to be willing to stay at Madrid to see his contract run closer to completion. He is said to be reluctant to extend his current deal with the Spanish giants, which will put him in a position of power next summer – his current contract expires in July 2015. With only a year left on his deal next summer, the attacker’s asking price would surely be reduced from its current astronomical value, and Madrid would be keen to recoup some of the world-record £80 million fee they paid for him.

United’s chances of resigning their former idol seems as far away as ever in this situation, however in a year’s time the Premier League champions would certainly be in a better position to wrangle him away from Madrid.

Although a wealthy club, United would be reluctant to match the transfer fees the likes of Chelsea, Manchester City or Paris-Saint Germain would offer this summer for Ronaldo. However in a year’s time when the player is a year older and within 12 months of leaving on a Bosman ruling, affording the superstar will be made easier.

Ronaldo may well have some unfinished business in Spain, given that Madrid still long to win La Decima. With the club’s presidential elections forthcoming, Jose Mourinho looking increasingly likely to leave in the summer and new signings to be made, Ronaldo’s situation could be a lot clearer in 12 months time. This will allow United to make a concerted and real effort to bring him back to Old Trafford.