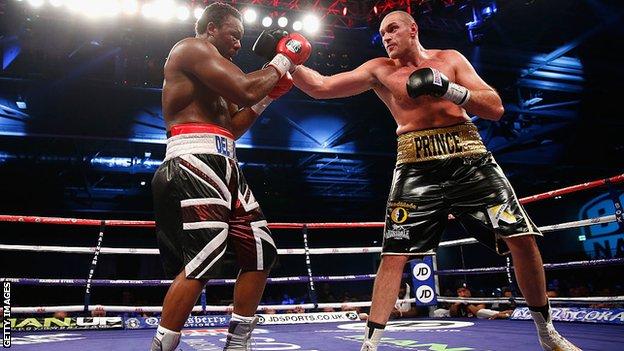 Boxing fans have been left fuming after Tyson Fury has confirmed he will fight Derek Chisora for a third time in December instead of an epic showdown against Anthony Joshua.

Fury outpointed Chisora in 2011 and beat him via TKO in 2014 leaving pundits and fans alike in their agreement that part three of the trilogy is nothing more than a exhibition match to keep Fury in shape for future bouts.

One boxing fan labelled the clash ‘pathetic’ and pointed out that Chisora lost to Fury’s last opponent Dillian Whyte after he knocked out his rival with a huge left hook in the 11th round.

And the general consensus across social media was one ranging from ambivalence and disappointment to full on fury as the news broke of the match which is scheduled for December 3 at the Tottenham Hotspur stadium in London.

Anyone who attends Fury Vs Chisora should be sent to prison

Fury vs Chisora 3 is everything that’s wrong with boxing. Not competitive! 2 old pals sparring charging PPV for it.

This is why we don’t get Fury vs AJ because the pair of them know they can make similar money against lower level guys and make mugs of the public paying for it.

Tyson Fury vs Chisora 3 is terrible. The UK 🇬🇧 just accepts anything in boxing lol Chisora lost like 7 of his last 14 bouts and Fury already beat him twice lol UK matchmaking is abysmal & British have the nerve to talk about who Wilder, Gervonta fight, etc #EGO pic.twitter.com/6x6wv7jgze

I mean this in the absolute kindest way possible.

If you buy a ticket to watch Fury and Chisora have a walk about outdoors in December, you should instead use that money to get professional help.

Tyson Fury vs Chisora is a shambolic fight to make. People criticise Joshua for having a soft record, but he would’ve been slated for taking this as a comeback fight. #boxing

5. My home and worldly possessions go up in flames.

If you get some spare time this week. Re-watch Fury vs Chisora 2. One of the most one sided beat downs you will ever see. Since then Fury has gone to another level. The audacity to make a 3rd fight between these two friends is astonishing. Especially at this time for UK boxing..

According to Tyson Fury, Chisora was already a Journeyman over 10 years ago.

Now he plans on giving him his 13th loss 🥊 pic.twitter.com/SD2DANZgAv