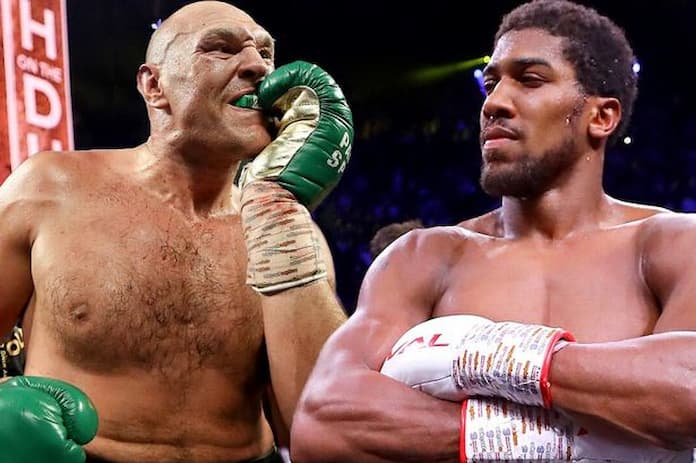 TYSON FURY has given boxing fans a glimmer of hope that his potential fight with Anthony Joshua could still be on. ‘The Gypsy King’ has taken to Twitter, releasing a video saying that the fight could still be on, IF ‘AJ’ signs on the dotted line before the end of this week.

Time will tell what happens next in this ongoing contract signing saga, but this is certainly a positive sign for boxing fans that we might actually see Fury vs Joshua on December 3rd.

In yet another turn of events in the continued saga of Tyson Fury and Anthony Joshua, the fight looks like it could be back on after Fury took to social media with yet another video message to his fans and to ‘AJ’.

After saying the fight was well and truly off as Joshua hadn’t signed the contract on Monday, the original deadline ‘The Gypsy King’ had set for Joshua, it seems the 6″9 giant has changed his mind yet again and is willing to step into the ring with AJ, provided the former two-time heavyweight champion of the world signs the contract by the end of this week.

Fury was adamant that that the fight was off, but with the two promotors of the two fighters, Frank Warren and Eddie Hearn, supposedly holding positive talks this week, it looks like the fight isn’t  dead and buried just yet.

The WBC World Heavyweight Champion released this video on Twitter on Thursday morning:

This is a message to @anthonyjoshua.

My promoter Frank Warren convinced me to let Queensberry carry on negotiating with your team this week, despite me knowing that you were never going to do this fight… pic.twitter.com/XpcHOpZJzk

Fury has made it very clear in this video that the fight with Joshua can still happen, but that he MUST sign the contract before the end of this week.

Fury further explained himself in a thread beneath the video in the Twitter comments, saying that all of the intricate details have now been ironed out so all that is left to do is sign the contract.

Fury’s potential opponent, Anthony Joshua, was in the ring very recently on August 20th when he was beaten by Oleksandr Usyk for the second time, but is keen to get back in the ring as soon as possible and get back to winning ways.

I have just been told that BT, Dazn, ESPN all the broadcasters are all happy with the terms and are ready to support this fight.  Your side has been given a contract that allows you to see every contract to negotiate contracts with any partners on the event.

Fury is adamant that the fight can get officially announced very soon, after some of the potentially big stumbling blocks have been overcome. The biggest threat to the fight seemed to be the broadcast situation, with both fighters tied to different networks.

The 34-year-old says he has been reliably informed that all three broadcasters are on the same page. Streaming giants DAZN, American broadcaster ESPN and British broadcasters BT Sport all happy with a co-broadcast of the potential Fury vs Joshua fight.

Additionally,  it has been agreed, according to Fury at least, that both Queensberry Promotions and Matchroom Boxing have agree to co-promote the event. It looks like the fight could actually happen now.

We have agreed to do it as co-promotion, everything in the pot, clean, fair, and transparently.

I had a bet with Frank that it didn’t matter what we offered you, you would not take this fight.

The undefeated champion is still calling Joshua’s bluff however, and still believes the London 2012 Olympic Gold Medallist won’t sign the contract. Lets all hope Fury is wrong and the fight does indeed get signed, sealed and delivered in the coming days.

So, it’s up to you, either I win my bet and you show the public the coward that you are or get your lawyers and your team on the phone today with my side, who are all available as they have been the whole time and get the contract signed.

You have had this contract for 2 weeks now, my team have got everything done with the broadcasters, tickets, venue everything is ready to go.

You have had 14 days, pull your finger out and make this fight happen for the British boxing public.

Don’t be a coward, instruct your team to get this deal done. @anthonyjoshua

In typical Tyson Fury fashion, the undefeated number one heavyweight in the division has called Joshua a “coward” if he doesn’t sign o the dotted line and accept the fight with ‘The Gypsy King’.

At the end of the day, the fight is an absolutely huge event. Two of the best heavyweights of the modern era, fighting in a sold out stadium, for world honours, that famous green and gold belt. Not to mention on UK soil too!

Lets hope both Team Joshua and Team Fury can agree in the coming days for the fight and that boxing fans all around the world get to see the fight. It really does have all of the makings of an all-time heavyweight classic and potentially the best fight in the division in the past 25 years.