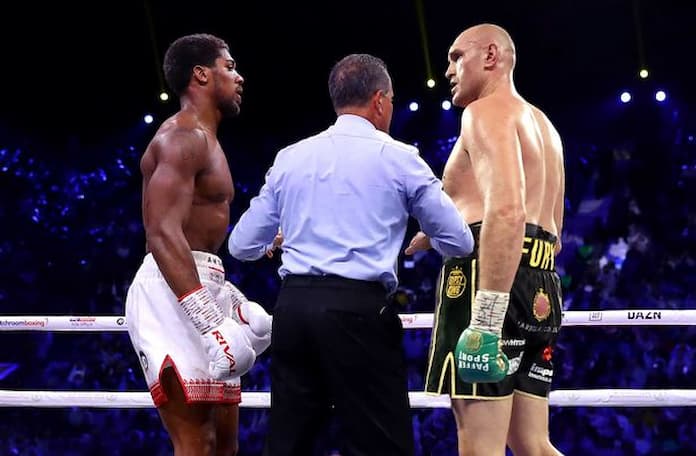 The Tyson Fury vs Anthony Joshua fight is in jeopardy as ‘The Gypsy King’ sets 5pm deadline yesterday for ‘AJ’ to sign the contract, which was simply not possible. While both fighters teams are still negotiating and trying to make the fight, it seems like Fury is fed up and getting impatient with Team Joshua.

Will the fight still happen? Who’s fault is it if the fight doesn’t go ahead? What issues need resolved for the fight to get made and the contracts to be signed? These are the questions boxing fans are asking, and as of yet, have no answer to.

Is Tyson Fury vs Anthony Joshua In Danger Of Not Happening?

After seemingly agreeing to the fight a fortnight ago, it looks like Fury vs Joshua could be in jeopardy. Whilst both Team Fury and Team Joshua are continuing to work hard to iron out some minor details and get the fight over the line, ‘The Gypsy King’ seems to be getting impatient and is beginning to look elsewhere for a different opponent.

Fury took to social media over the weekend, saying that if Joshua hadn’t signed the contract by 5pm on Monday 26th September, then the fight was well and truly off.

Fury first called Joshua out three weeks ago, saying that he wanted to give the British fans what they wanted as Usyk wasn’t available to fight until spring/summer of next year.

Since then, it seems like both teams have had positive discussions about the fight. A purse split of 60/40 in favor of ‘The Gypsy King’ was agreed, with December 3rd also seemingly being agreed as the date.

It is only the broadcast deal that essentially needed sorting out, so with there still being no official contracts signed, is this the problem right now?

Fury took to Instagram over the weekend with this message to Anthony Joshua:

Joshua responded to Fury’s video in his own unique way, with a rap video. It is clear to see ‘AJ’ wants the fight, but that he is letting his legal team sort the contract out first before he signs on the dotted line.

It isn’t all bad news however, as it seems that the promotors and managers of both Fury and Joshua have been having some positive meetings. Representatives from both parties met on Monday 26th September to discuss the fight, and it seems like everything went swimmingly according to both Frank Warren, Fury’s promotor, and Eddie Hearn, Joshua’s promotor.

Who knows what will happen next in these roller-coaster contract negotiations, but one thing is for sure, boxing fans are still eager to see Fury vs Joshua on December 3rd. Lets hope the respective teams can sort everything out and the fight gets announced in the coming weeks.