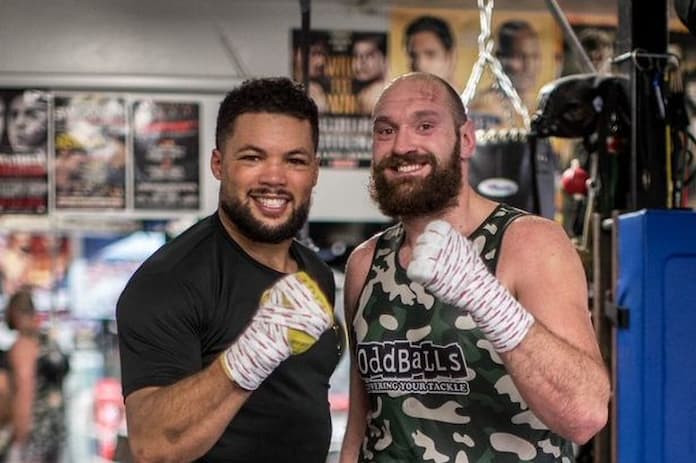 Tyson Fury has teased a potential fight with fellow British heavyweight, Joe Joyce, after naming him as the second best fighter in the division behind himself. Fury, who could be fighting Anthony Joshua next, was impressed with Joyce’s performance on Saturday night in his win against Joseph Parker, Fury’s friend and training partner.

‘The Gypsy King’ Teases Future Fight With ‘The Juggernaut’

Despite insulting Joyce in the past calling him slow, cumbersome and too easy to hit, Tyson Fury has now revealed that he believes ‘The Juggernaut’ is the second best heavyweight in the world.

Fury has stated that he has ‘changed his mind’ about his British heavyweight rival, and after Saturday’s 11th round knockout of Joseph Parker, is better than the likes of Oleksandr Usyk, Anthony Joshua and Deontay Wilder, in the eyes of ‘The Gypsy King’.

Here is what Fury had to say on social media in a video he posted last night:

Fury, seemingly full of praise for Joyce all of a sudden, says that a fight between the pair could well happen in the future. Albeit Team Fury and Team Joshua are still supposedly negotiating a contract for December 3rd, so the fight definitely won’t happen next.

Although it certainly won’t happen next, there is a possibility that Tyson Fury vs Joe Joyce could well happen in the not so distant future.

It would be a huge fight in Great Britain, certainly one that could fill out any of the major stadiums such as Wembley, the Principality, Old Trafford or the Tottenham Hotspur Stadium.

For now though, the fight is just a bit of talk and chatter, but who knows what the future holds and whether the ‘Juggernaut’ and ‘The Gypsy King’ could face one another in the boxing ring next year.

Haven’t claimed the Fury vs Joyce betting offer yet? Don’t worry, take a look at the best betting sites and claim the best bookmaker free bets. Be sure to also check out the best offshore betting sites.

Here is a list of Bovada‘s prices for the potential Fury vs Joyce fight: