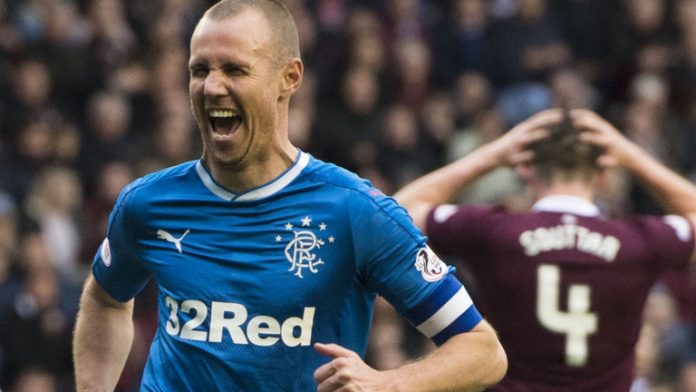 The news that Rangers have suspended Kenny Miller and Lee Wallace over their conduct following Sunday’s defeat by Celtic didn’t come as a surprise.

However, the reaction of Rangers’ fans to Miller’s suspension in particular was certainly surprising given that this isn’t the first time he’s been involved in something of this ilk.

The pair are set to face disciplinary action over a dressing room bust-up with manager Graeme Murty after the 4-0 defeat by their Glasgow rivals in the Scottish Cup semi-final.

The move could effectively end Miller’s career with Rangers as his contract is set to expire at the end of the season.

The 38-year-old forward was an unused substitute at Hampden Park.

Club captain Wallace, who has a year remaining on his deal, has not played since September due to injury.

Reports of a tunnel bust-up between Greg Docherty and Alfredo Morelos were played down by Rangers after the two players were pictured arguing on the pitch following the full-time whistle on Sunday.

In the case of Miller, the news of his suspension appeared to divide opinions of many Rangers fans on Twitter.

It’s clear he is a problem in the Rangers dressing room. It’s time for him to go anyway, clear out and rebuilding job needed for the 7th time in 7 years

Here the better question, is it the Managerial appointments that are to be blame or maybe players that Kenny Miller who undermine manager after manager that is the bigger problem. This is the second manager this season that has had issues with Miller.

Kenny Miller played for Celtic and enjoyed it, should never have been re signed anyway. All this should not take away from the fact he’s rubbish. Absolutely rubbish. Sack him into retirement.

Absoulety disgusted by the way 2 senior players Kenny Miller and Lee Wallace have been treated by the club both men have more passion in their little finger then the rest of the team, manager and the board

Twice the case for Miller, with two different managers. The common thread….. Kenny Miller. Even if he isn't disruptive, you have to respect the manager, as in any workplace. The boss is the boss, you don't like it, leave or keep your mouth shut

Kenny Miller being hung out to dry by those in charge at ibrox who haven't got a clue what their doing. Now being scrutinised by press and @BBCSportsound . Others need to look at themselves not Kenny Miller. He's been both sides of the divide knows what's required.

Putting aside the fact that Miller’s ‘legendary’ status at Rangers is blighted by an earlier association with Celtic, it seems odd that anyone would support the striker in this particular row.

Rumours that Miller is a disruptive influence in the dressing room have been circulating for a while and, much like Celtic skipper Scott Brown, he’s always appeared to be the sort of individual who’s had far too much to say for himself given the level he’s playing at.

Arguing that a 38-year-old player who has scored just five goals for Rangers this season should be allowed to undermine the manager, no matter how much you may think that manager shouldn’t be in charge, is simply daft.

Rangers were humiliated by Celtic on Sunday and they remain a long way short of having the quality to seriously challenge their big rivals.

Ridding themselves of the likes of the outspoken Miller would be a good place to start if they want to close that gap anytime soon.