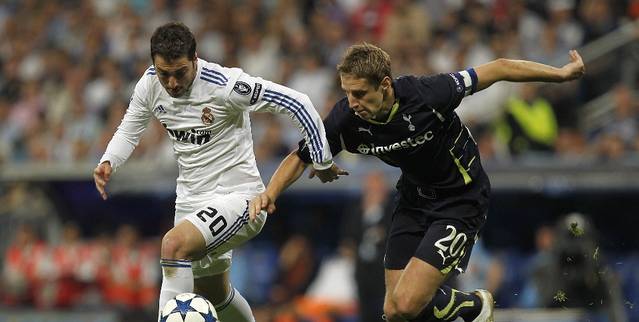 A quick look at Real’s 1-0 win at White Hart Lane through lists of five: things we learned, the best moments, and the best and worst players on the night.

1. Tottenham are a few substitutes short of a title challenge. Under different circumstances, Tottenham’s performance tonight would have been heralded as a heroic stand against an established member of the European elite. Players of the calibre of Luka Modric, Gareth Bale, Rafael van der Vaart, Aaron Lennon and William Gallas could stroll into most of Europe’s top sides; the problem is that when Bale and van der Vaart were sidelined in January, Spurs were unable to find satisfactory alternatives. Unfortunately, as Manchester United have proven so adeptly this season, champions are able to muddle their way through sticky patches; Tottenham have found winning when out of form just a step too far.

2. Cristiano Ronaldo’s shoot-on-sight policy works. Admittedly, the disconcertingly orange Portuguese has to shoot every single time he gets even a whiff of an opportunity to do so, but it means that eventually he’ll hit one of those venomous shots that seem to dip completely at random…and there will be a goalkeeper ‘colourful’ enough to make a hash of it. Thanks to Heurelho Gomes, Ronaldo was able to stay in touch with Lionel Mess – I mean, help Madrid to secure their advantage over Tottenham.

3. English teams dive just as much as any other side. Not really a ‘new’ discovery, but Tottenham, inspired by Gareth Bale’s Olympic leap early on, flung themselves to the ground almost as heroically as they fought to score a consolation goal to send their fans home happy. They would almost certainly have reached their aim had Bale, Modric, Pavlyuchenko (twice) or Sandro managed to con the referee into pointing to the spot; instead, they simply proved that the idea that English teams are somehow genetically imbued with a sense of ‘fair play’ is a load of romantic ‘it was better in my day’ twaddle.

4. Emmanuel Adebayor has found ‘the love’ once more. The Togolese international, on loan from Manchester City, appears to have settled in rather nicely at the Bernabeu. Following his goals in the first leg, the former Arsenal striker weathered the boos from the home crowd to produce a hard-working display alone up front. He didn’t score, but he looks happy. For now.

5. Heurelho Gomes is still at it. Just when you think he’s become reliable…at least the tie was already done and dusted. Better for him to get his mistake done now than against Arsenal at the weekend…

1. Of all of Tottenham’s hopeful penalty appeals, the one for Raul Albiol’s challenge  on Luka Modric was the only one for which they may hae had legitimate cause for complaint. Big decision from the referee, and one which might have altered the complexion of the match.

2. Ronaldo’s goal. The Madrid star struck the ball sweetly and it swerved horribly in the air,but given how it was at such a comfortable height for Heurelho Gomes and how far out Ronaldo was when he struck the shot, it simply has to go down as a monumental gaffe. The slow-motion flail, a desperate attempt to palm the ball away as it trickled hopelessly over the line, only added to the cringeyness of the moment.

3. Gareth Bale latching onto a long pass from Michael Dawson around seven minutes in and taking a majestic touch round Sergio Ramos. A brilliant piece of skill which signalled Tottenham’s desire to make a fist of things.

4. The crowd following a chant of ‘There’s Only One Paul Gascogine’ with a beautiful rendition of ‘There’s Only One Gary Mabbutt’. The former mulletted centre-back was sat beside Gazza and the crowd saw fit to acknowledge the fact with a roaring tribute. The tie utterly finished, it was a sign of real humour.

5. Ricardo Carvalho’s booking. For Real at any rate. The Portugal international’s yellow card means he will miss the first leg of the tie against Barcelona. He will be missed.

1. Mesut Ozil. The German international ran Madrid’s counter-attacks like clockwork. At times, he makes Cristiano Ronaldo look peripheral, and he deserves to be keeping Kaka out of the starting eleven.

2. Luka Modric. On the other side, we have a player perhaps not quite as recognised for his playmaking abilities but one who is certainly a match for Ozil. Modric ran his heart out, supplying an array of incisive passes and making good runs before Ronaldo’s goal took the sting out of Tottenham’s game.

3. Sami Khedira. One of the most underrated midfielders in the game. His tracking of Bale neutralised the Welshman after his opening salvo blitzed Sergio Ramos; the German was also able to get forward in support of counter-attacks for the whole game.

4. Aaron Lennon. Played in fits and starts, but was a constant menace down the right hand side.

5. Xabi Alonso. The only Madrid player who is really suited to picking the short, tranquil pass when needed. Important in calming the game down, particularly in the first half. This was reflected by the fact that Jose Mourinho replaced him with a striker, Karim Benzema, when it was obvious there was absolutely no way back for Spurs.

…and the Five Worst

1. Sergio Ramos. Gomes’ was an isolated incident, but the Spanish international right-back had no idea how to deal with Bale, often resorting to fouls when Sami Khedira couldn’t support him. Eventually replaced by Granero so as not to risk being sent off and missing the Barcelona clash.

2. Heurelho Gomes. For the fumble. It wasn’t the reason Spurs went out, but it was a sad way for such an exciting Champions’ League run to end for the North London club.

3. Roman Pavlyuchenko. Missed two big chances, one in each half. His link-up play is excellent, but he is clearly not suited to bearing the responsibility for finishing chances. For European fixtures where a 4-5-1 is needed, Spurs need a striker who combines the Russian’s movement and build-up play with Jermain Defoe’s eye for goal.

4. Alvaro Arbeloa. Didn’t struggle as much as Ramos, but he clearly didn’t relish being pitted against Aaron Lennon. A few cynical fouls.

5. Tom Huddlestone. Perhaps a little harsh given how long he spent on the sidelines, but his distribution from central midfield could have been a lot better. He seemed to grown as the game slowed down, as you might expect from a more cultured central midfield player in a game played at this pace; the same happened with van der Vaart.