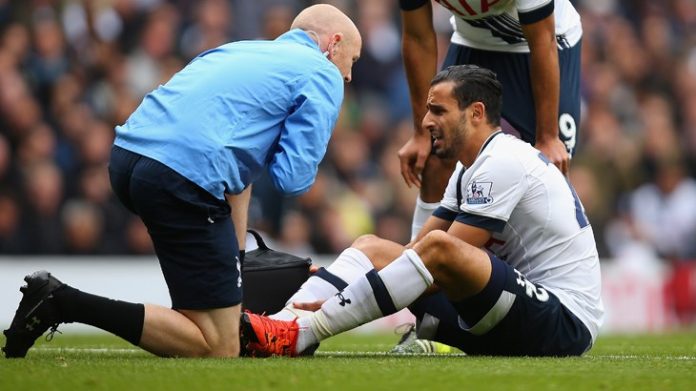 Tottenham Hotspur have confirmed their star midfielder Nacer Chadli will be out of action for six weeks with ankle ligament injury.

The Belgium international picked up an injury during the north London club’s 0-0 draw against Liverpool at White Hart Lane. Spurs manager Mauricio Pochettino said the midfielder will be assessed before getting to know the extent of the injury after the match.

The former Southampton boss said,” We need to assess tomorrow and after tomorrow we will know more. Maybe it’s a problem in his ankle ligaments but we hope it is not a big, big issue. After the game it was painful and in the next 24 or 48 hours we will be able to see better how the injury is.”

Chadli was set to be out of action for four weeks, according to the Daily Mail. However, the extent of injury is set to be serious as he will spend the next six weeks on the treatment table. Tottenham confirmed the news on their official website.

“Further assessment and investigation has confirmed that Nacer Chadli suffered ankle ligament damage during our draw against Liverpool,” a statement read.

“The Belgium midfielder was forced off with the injury early in Saturday’s game and is expected to be sidelined for around six weeks. Our medical staff will continue to monitor his progress during his rehabilitation to determine when he will be ready to return to training.”