North London club Tottenham Hotspur have joined the race to sign Argentine defender Marcos Rojo, who is also a reported target of Liverpool.

Rojo, the 24-year-old left-back, who can also play as a centre-back, has impressed with his performances for Argentina in the World Cup so far.

Liverpool were thought to be heavily interested in signing him, with O Jogo recently published an article claiming, the Reds are are willing to pay more than €15m to secure his services.

Liverpool have shown a long standing interest in Rojo, with scouts having watched him on several occasions this season. 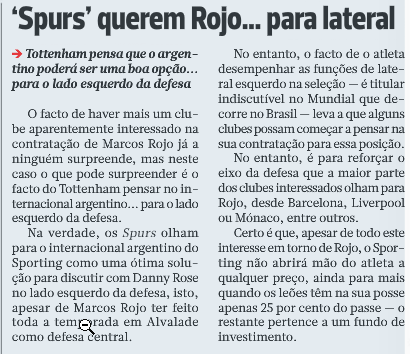 Sporting, who owns only 25% of the player’s economic rights, are willing to wait until the World Cup gets over, as they believe his value might increase there.

Liverpool need a solid left-back in the summer and have been linked with several defenders. The Reds were heavily linked with a move for Sevilla defender Alberto Moreno, but it seems the deal has hit a snag while Liverpool have shifted their options elsewhere.

Portugal newspaper A Bola now reports that Tottenham Hotspur have also joined the race to sign Rojo. Spurs manager Mauricio Pochettino wants to bolster his defensive options and is showing a keen interest in the Argentine defender.

Spurs manager is not too convinced with left back Danny Rose while wants to use Jan Vertonghen mainly as a central defender. Should Liverpool move quickly or wait to see how situation shape up after the World Cup?