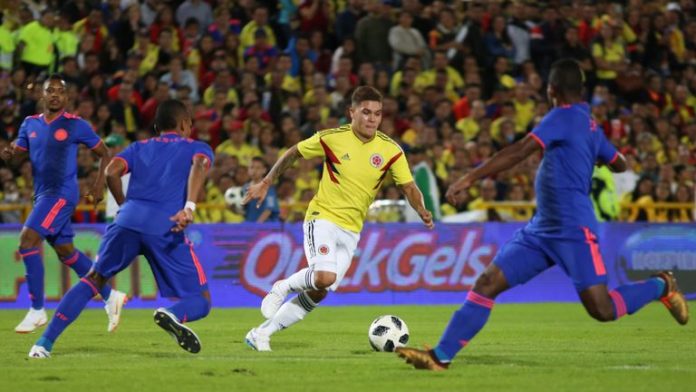 Tottneham Hotspur and Wolverhampton Wanderers would have to pay £22 million to secure the services of Juan Fernando Quintero.

The midfielder is on a year-long loan with River Plate from Porto, and the Argentinian club are expected to exercise the right to buy the 25-year-old.

However, club president Rodolfo D’Onofrio says Quintero could be available for sale if another club meets the asking price.

“I know of offers for Quintero,” he said. “He is happy to be in River. If someone wants to take him, they will have to pay €25million.

“Let’s not take it out of context – the boy says he’s okay here.”

Quintero’s World Cup place had looked in doubt after he struggled for form, fitness and games at Porto, but a move to River Plate in January reignited his fortunes.

He made 13 appearances in the Argentine top flight and secured his place in Russia.

Quintero scored his country’s first goal of the 2018 World Cup with a low free-kick against Japan in a game they lost 2-1.

He played well against Poland and Senegal, before featuring for 88 minutes against England in the last 16 of the tournament.

“Juanfer reminds me of Riquelme,” he added.

“He is one of those players with peripheral vision, he looks to the right and he knows what happens to his left.

“He has shown little-by-little that he is a superlative player.”