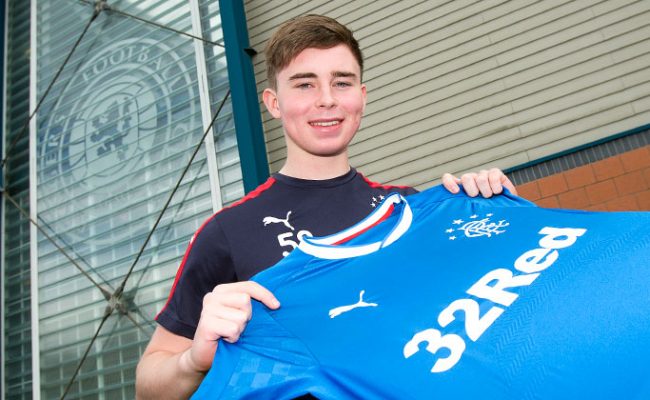 Rangers midfielder Jack Thomson has admitted a loan move away from Ibrox is “definitely a possibility”. The 18-year-old has yet to break into the first-team and would be open to a temporary switch to another club if it will allow him competitive football. Thomson also said he wouldn’t have any preference on which club to join.

The youngster told SportsTimes: “That is definitely something that is a possibility for me in the second half of the season and I will look at maybe going out on loan and playing at a different club to get first team experience. I am not too concerned where that is, as long as I am happy and I am progressing, that is what matters the most.”

Thomson, who revealed in the same interview that he’s been at Rangers since he was six years old, has stiff competition in his quest for first-team football with Ross McCrorie, Andy Halliday, Graham Dorrans, Lassana Coulibaly, Ovie Ejaria, Ryan Jack and Jordan Rossiter on the books. He’ll take confidence, however, from McCorie, Coulibaly, Ejaria and Rossiter being 22 and younger.

The Evening Times says Thomson has impressed for Rangers at youth level which led to him being a part of the first-team under new manager Steven Gerrard. He may not make an appearance this season due to the competition, but Thomson is still only young and could benefit from regular football with a loan club.

A temporary switch is something the midfielder would favour, so he’ll be hoping offers come his way when the winter transfer window opens in January 2019.