Where would we all be without the UK Press? An even better question is what am I doing adding even more print to the already exhausted saga of the world record transfer of the greatest narcissist in the history of football?

Ronaldo must be positively unbearable, flouncing around in LA with the world media spotlight on him. It’s what he craves and lives by and what defines him as the shallow and conceited individual that he is.

And could our wildest dreams come through….that he fails his medical due to an STD picked-up from Paris Hilton, whom he reportedly cavorted with last night, returning to her sister’s house in the early hours from an elite LA nightclub.

Now there’s a woman who appreciates diving to the fullest, adores a good wink and is reportedly a screamer on a par with Ronaldo’s finish against Porto in the CL quarter final. “Take it out of that,” was her likely request as dawn broke over LA today.

But no! That would be a nightmare! As a Utd fan the last thing I need is for this deal to fail.

But back to the UK Press! Exhaustive coverage has been extended for the reader interested in the subject and who wants to be able to show his/her worth in the Friday night debate at the pub.

So if you are one of those, and in the interest of saving you time, here are the facts distilled into one simple (very) article.

When the Deal was Done.
A year ago, The Guardian tells us but a bit further down changes its mind to last September. The Times tells us that there was ‘no warning’ from Real about their bid. The Mail on the other hand is totally confused. Depending on where you want to look in their analysis the deal was struck ‘before Christmas’, ‘in the winter’ or ‘last summer’ (according to Calderon). Talk about blowing hot and cold!

The Mirror insists that the first contact in relation to the deal was ‘this week’ but The Record disagrees. The deal was done ‘last year’ according to them.

Agreeing the Deal
The deal was tied up in 15 minutes on Wednesday in a phone call by Perez to Gill, says The Guardian.
The Times suggests that it took 2 hours and involved a fax from Real to Gill, a call from Gill to Fergie, to get his approval, and a further call to the Glazers for the final seal of approval.

However, the version in The Mirror and The Record tell us that the pecking order was a phone call by Gill to the Glazers and THEN to Fergie (no timeframe suggested in either case).

The Fee
No conflict on this one, definitely 80M. 4 x 20M annual installments The Times tells us but if you read The Mail you’ll know that it’s a one-off up-front payment! 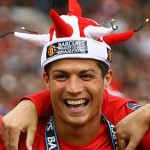 The Timing
By the end of June (various).
‘Ronaldo expected to arrive in Spain in the next few days,’ says The Guardian.
‘Will complete the deal today,’ according to The Record, or ‘Real are sending a medical team to LA,’ (The Telegraph), possibly to do a Paris Hilton-ectomy, but that has not been confirmed.

Fergie’s Transfer Targets
Good unanimity on most of the names but that’s where it ends I’m afraid.

Ribery
‘Would prefer Spain’ (The Guardian).
It’s not him, The Mail explains, it’s his wife who wants a warmer climate. (“Bugger winning the CL, I want a sun tan!”…..that’s me talking by the way, not The Mail. God forbid they’d get a sense of humour!)

But hang onto your wallet! 64M says The Times, 50M (The Express), and 65M from The Mail (just to trump those upstarts at The Times).

Benzema
68M is The Guardian’s bid but they then suggest that he’d go for ‘half of that’. After all, what’s 34m between friends?

The Times bid 42M while The Express, The Mail and The Sun all agree on 25M (cheapskates). The Mirror ups the ante to a more plausible 30M (he is only 21 after all!).

Valencia
17M from The Guardian, 22M say The Express, 16M from The Mail. The Mirror journalist (obviously a Wigan fan) weighs in at 23M!

Now if only the others read The Sun first before making their numbers up………………or maybe The Guardian did!

Others
The Mail suggests Yaya Toure and The Sun go with Fabiano. It’s easy enough to picture how those ones came about:

Bored journalist pissed-off that everyone is mentioning Ribery, Benzema and Valancia. How about something original he thinks! Leans over to the next desk and asks: “Hey Bob, if you had 20M to spend as a manager, bearing in mind you being a Wimbledon err sorry…MK Dons fan, who would you spend it on?” Bob scratches an itch and quickly comes-up with Toure/Fabiano. Job done! Now there’s an original thought none of the others will come up with! 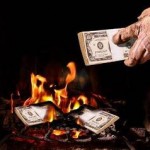 How Much Has Fergie to Spend?
The Express, The Star and The Sun all conclude that he has 80M in the transfer kitty. You can only surmise that extensive investigative journalism led to that conclusion in all cases!

However, The Mail has the inside track on this one!
‘Exclusive!’ they declare, ‘Fergie given 100M to burn.’ Yes, I joke you not…the man’s gonna burn the bloody loot! They go on to explain that it comes about from the 80M Ronaldo deal plus the 20M he already had approved. Now that’s investigative journalism…and then some!

So there you have it. You are now armed with the facts and won’t be caught napping at the pub tonight.
And just to cover you even more here are a few more things you’ll need to be up to speed on:

‘It’s a great deal for United’ or ‘This is a disaster for United.’

And don’t forget what The Guardian has told you: ‘Devastating blow to Utd and a deal the fans have been dreading’. Trust me, every comment I have read from Utd fans supports that!

Also remember that The Times have warned of ‘Utd fighting-off an exodus.’
Tevez may leave and Vidic is of interest to both Barca and Real! Bloody hell, now that’s an exclusive if ever I saw one….exodus indeed!

Away you go then and don’t make a mug of yourself. I’ve saved you hours of reading and left you at the cutting edge in terms of owning the facts of this matter.

You gotta love the UK Press!