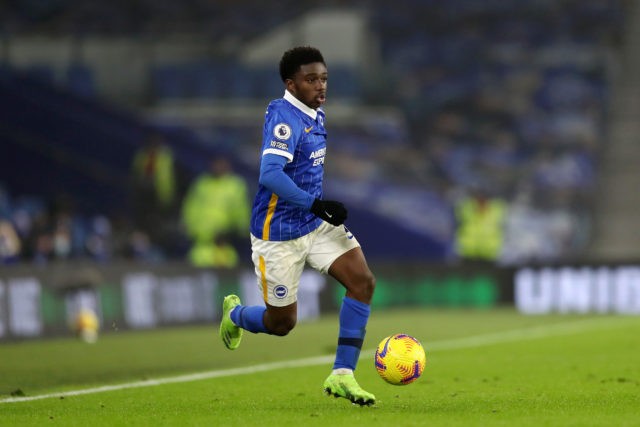 Many Everton fans feel that Tariq Lamptey would be a fantastic addition to Carlo Ancelotti’s squad.

According to The Athletic’s David Ornstein, Everton are one of the clubs who remain a keen admirer of the Brighton and Hove Albion right-back.

The 20-year-old has signed a new four-and-a-half-year deal at the club. However, it hasn’t put his suitors off, with Everton, Manchester City and Arsenal keeping tabs on his situation.

The report claims that Lamptey, who joined the Seagulls from Chelsea on a three-and-a-half-year deal last January, is open to a new challenge.

Brighton are 16th in the Premier League, five points above the relegation zone, and should they drop down, Lamptey could become an easy target.

Many Everton fans have praised the youngster with one even saying he should be the club’s first-choice right-back target next summer. Here are some of the selected tweets:

Non starter this unless they are relegated, Can't see us paying the money wanted for him.

If Brands previous business suggests anything, that we would be more likely to look at Aarons. (apparently valued at 20/30 Mil but depends if they are promoted.)

Would be a fantastic acquisition. Can see him replacing Kyle Walker, personally.

Boss player would love him at Everton

He'll go at some point… him or White will be our first big money sale. He is absolute class.

Lamptey has really impressed this season. He is quick, intelligent, and is very good with his deliveries.

The right-back is one area where Everton could be looking to bolster next summer, and Lamptey could be considered as an option at that time.

Seamus Coleman is approaching the fag end of his career, and Everton need his long-term replacement.

Jonjoe Kenny, who did so well at Schalke on loan last season, has failed to impress the Italian boss. In fact, he could be sold this month, with Burnley keen to secure his services.

Everton are likely to face competition from other Premier League clubs, but the lure of working under Ancelotti could be too tempting for the youngster to turn down straight away.