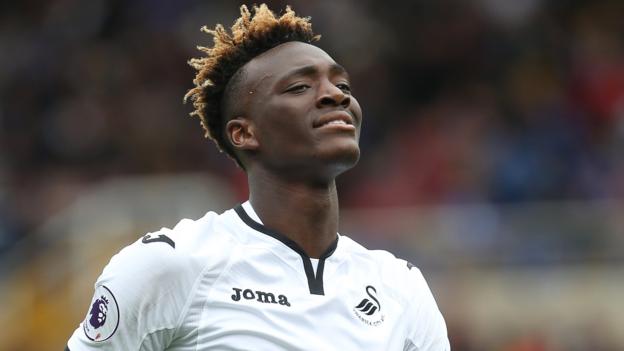 Chelsea striker Tammy Abraham has committed his allegiance to the Three Lions amid rumours that he would represent Nigeria at international level.

The 19-year-old, on loan at Swansea City, qualifies for the African nation through his father. The Nigerian Football Federation were serious in their pursuit to convince the youngster to switch his loyalties but Abraham released a statement confirming that his future lies with England.

“Contrary to reports in the media today I would like to clarify that I have not agreed to switch my national team allegiance,” read a statement from Abraham.

“I can confirm I met the President of the NFF after our last game against Tottenham at Wembley on Saturday given he is a friend of my father.

“However, any suggestion that I have made a decision to change my international representation is incorrect and wide of the mark.

“I have informed The FA that I remain available for selection for England.”

Swansea manager Paul Clement advised the England U-21 international to stick with the Three Lions. Speaking ahead of the Swans’ Premier League clash against Watford, Clement said: “For me, from my point of view, I hope he stays with the English national team.

“I’m not sure he’d be better off career-wise, I’m saying it because I’m English and he’s a good English talent, so you want him involved with your national team.

“Ultimately, it’s the decision of the player. In some cases, they’ll make the choice because they see a better opportunity, a chance of playing more regularly at international level and in other cases, it’s because it’s where they believe they’re from and they want to represent the country where they were born or where their parents were born and it’s in their culture.

“Whatever their reasons are, it’s down to the player to decide.

“The fact that he’s come through the English system, first at Academy level and also playing for the English national teams, I think that puts them at an advantage.”

Abraham, 19, has scored two goals in the Premier League in five appearances for Swansea this season.