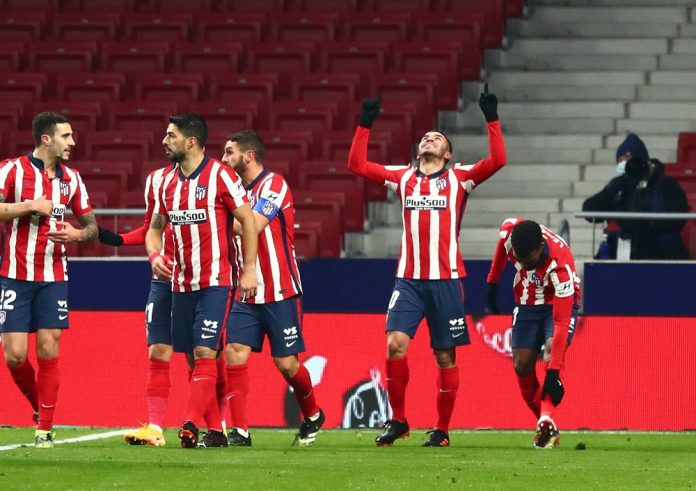 Atletico Madrid faced a challenging midweek game against a prominent Sevilla side on Tuesday night.

It serves as no surprise that Atletico has the best defensive record of all teams in Europe’s top five leagues with goalkeeper Jan Oblak conceding a mere six goals in 16 games.

Atletico’s victory against Sevilla was another tactical masterpiece from Simeone as they recorded their 11th clean sheet of the season.

The entire premise of Atletico’s game comes down to their defensive shape and organisation. Although their main formation in attack is a 3-5-2, when a player loses the ball, all nearby players first press hard to win it back before everyone drops back into a defensive 5-4-1.

Yannick Carrasco drops back into a left-back position, and forward Angel Correa drops back into the midfield ahead of Kieran Trippier, sometimes dropping back further to provide a six-man defensive wall. This leaves prolific striker Luis Suarez as the lone man up top for an outlet to start a counter-attack.

This strategy worked quite well for Atletico in the first half, with the majority of successful counter-attacks being played through Carrasco and Thomas Lemar connecting on the left and Trippier bolstering down the field on the right.

Both big chances in the first-half came from these players with Lemar switching the play to Trippier who set up Correa for the first goal, along with an inch-perfect chip from Trippier to Suarez who forced an incredible save out of Sevilla goalkeeper Bono.

Atletico switched their attacking formation depending on the flow of the game between their starting 3-5-2 and 4-3-3 with Correa providing the attacking width on the right side.

While in the 4-3-3, Mario Hermoso was able to slide over and serve as a left-back, giving Carrasco more freedom going forward. Atletico would sometimes even change between these two formations with ease on the fly.

The second-half was an entirely different type of game for Atletico who relied on their defensive formation for nearly the entirety of the second half, putting nearly every player behind the ball. While Sevilla had 13 shots throughout the game, Atletico limited Sevilla’s chances as Oblak was hardly tested.

While Atletico are used to not having a huge chunk of possession in some matches, Simeone’s side only managed 33% against Sevilla, creating very limited chances in the second half.

Atletico struggled to get out of their defensive shape and keep hold of the ball in transition, often just hoofing clearances forward without retaining the ball. Simeone brought on Saul Niguez and Joao Felix in a double change that immediately helped Atletico retain the ball better and ultimately led to their second goal of the match coming from yet another Trippier through ball.

Throughout the entirety of the match, Atletico’s transition from attack to defence was impeccable. Carrasco and especially Trippier’s wing play was crucial in their attack along with attacking midfield creativity from Llorente who made many deep runs to stretch the play and Lemar who was the centre midfield spark and creator.

However, one thing that Simeone’s team can improve upon from this game is their transition from defence to attack and getting Suarez more involved in the build-up play. Too often they lost the ball and were put immediately back under pressure.

On another day that their attackers weren’t as clinical, perhaps the score would have been a stalemate. Atletico ultimately capitalised on their five total shots in the match, putting two in the back of the net, and held down the defensive fort yet again to shut Sevilla out and secure the victory.

Atletico will be seeking to extend their lead on top of the table at their away match against Eibar on January 21 while Sevilla will be looking to get back to winning ways against Alaves on January 19 following their Copa del Rey clash against Leganes.