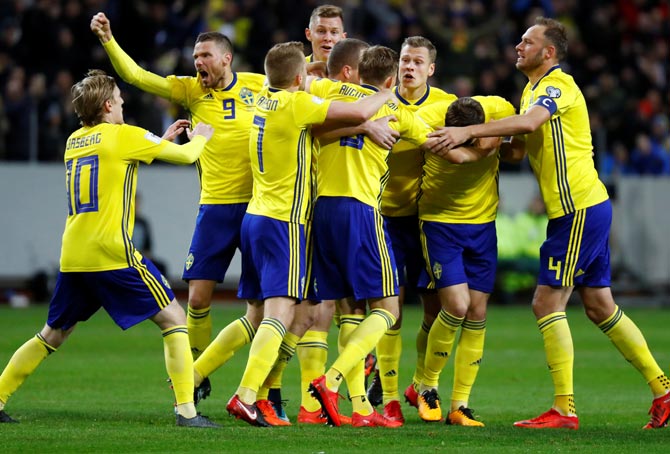 This summer’s tournament will be Sweden’s first since the international retirement of long-time talisman Zlatan Ibrahimovic and their first World Cup since 2006.

In terms of expectations however, not much has changed.

They will consider themselves hard to beat, fancy their chances of getting through the group and treat any further progress as a bonus.

There are few, if any, star names but Sweden dispatched Italy in the playoffs and beat France in a qualification run that saw them keep seven clean sheets.

A classic case of the finished product being greater than the sum of it’s parts, the group contains good players scattered around Europe’s main leagues but precious few are at the bigger clubs, or key performers.

It is a hard-working group though with an excellent spirit and everyone’s role is clearly defined.

Jakob Johansson, scorer of the winning goal that saw off Italy, has been ruled out after he failed to recover from cruciate ligament damage in time.

Meanwhile, Ken Sema, a winger at Ostersund regarded as an exciting talent with a bright future, was overlooked by Janne Andersson in favour of more trusted wide-men adept at keeping the shape of the side.

In charge for two years now, Andersson has adopted a pragmatic approach, making the most of his modest resources.

He has kept things simple and has achieved considerable success by doing the basics well.

The 55-year-old deserves credit for developing an atmosphere in the Sweden squad that should stand them in good stead.

He has an admirable track record in the Swedish domestic league and points to his ability to treat players “as human beings” as a key element of his style.

Andersson’s side will be one of the few at the tournament to deploy the currently unfashionable classic 4-4-2.

The approach suits well to their highly organised style where simplicity, grit and concentration are the key elements.

While neither Marcus Berg or Ola Toivonen in attack are likely to challenge for the Golden Boot, they are an effective duo that will cause problems for even the German backline.

The two banks of four behind them are fairly rigid, with only Emil Forsberg allowed license to drift and create. If he is stifled the team will need to go direct or threaten at set pieces.

The only member of the squad that could be considered a stand-out performer in one of Europe’s big leagues, Forsberg is steadily building a reputation as a high-end playmaker.

Rumours of a transfer away from Red Bull Leipzig are accelerating with Arsenal a regularly touted destination.

He will look to drift into the hole from the left wing. Both a scorer and a creator, Sweden may struggle if they cannot get Forsberg into the game.

After a solid season in the Bundesliga with Werder Bremen, Augustinsson has managed to displace Swansea’s Martin Olsson as first choice left-back.

The 24-year-old is a ferocious competitor who could just provide another way to goal for his side with his ability to get forward and deliver crosses of exceptional quality.

Despite the Mexicans’ record of escaping the group at the last six tournaments, Sweden look well equipped to follow the Germans into round two.

Brazil would await however and unity will be no match for quality should this be the case. Last 16.