Louis van Gaal will be looking for retribution after losing his first competitive game as Manchester United manager at home to Swansea City in the opening kickoff of the 2014-15 season.

Manchester United have lost only one of their last 19 games in all competitions, and although not looking convincing in many matches since the turn of the year, they are getting the results.

Swansea City remain in the top half but have won only one of their last seven in the Premier League.

Kyle Bartley has been out since the beginning of December with a knee injury and is expected to miss most of the remaining fixtures this season.

Marvin Emnes is a doubt with a hamstring strain but otherwise Garry Monk has the best part of a full squad to choose from.

Phil Jones is a doubt with the knee injury he picked up at the beginning of the 3-1 win over Burnley over a week ago. Michael Carrick remains on the sidelines as the only other first team player missing for Louis van Gaal. 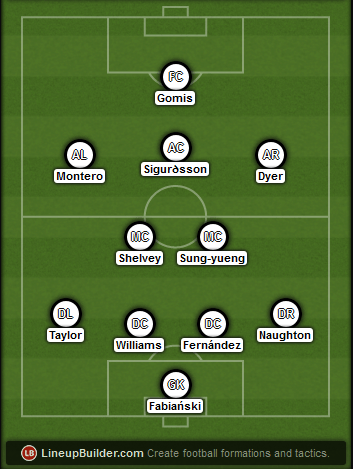 January signing Kyle Naughton has taken over as Swansea’s first choice right-back. Jonjo Shelvey is always up for the game against Manchester United, these days playing in front of the back four. Jefferson Montero is a quick and lively left winger, whilst Bafétimbi Gomis has only one goal in 21 Premier League appearances (9 starts). 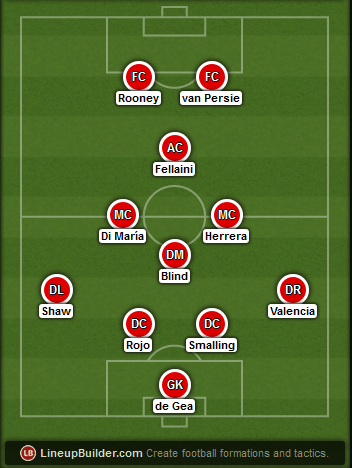 Chris Smalling can continue alongside Marcos Rojo in the centre of defence if Phil Jones is not fully fit. Daley Blind sits in front of them. Radamel Falcao has been very poor of late so we can see Wayne Rooney starting the game where he finished at Preston on Monday night – up front. Marouane Fellaini is a useful weapon playing off the front two these days.

Wayne Rooney vs Federico Fernández
Swansea have kept only one clean sheet in their last seven Premier League games, conceding 14 during this run. Their defence is fragile to say the least. The workrate and movement of Wayne Rooney and Robin van Persie up front should really cause the home side some problems in this one. They’ll need supply from the midfield though – Fellaini with the flick ons and layoffs, Ander Herrera is a playmaker, and so can Ángel Di María – but the Argentine has been out-of-form.

Robin van Persie vs Ashley Williams
The Dutch striker continues to be Manchester United’s top scorer in the Premier League this season but Robin van Persie only has two goals in his last eight appearances. He should see opportunities in Wales on Saturday with the chances Swansea have been allowing the opposition of late. Ashley Williams is a solid defender but the supporting cast around him have been anything but solid of late.

Marouane Fellaini vs Jonjo Shelvey
The tall Belgian midfielder has been a useful threat for Manchester United of late. He scored the goal that gave them the lead at Preston on Monday and should win any physical and aerial battles against both Jonjo Shelvey and Ki Sung-yueng. The former often risks cautions with his aggressiveness too.

Prediction: Swansea 1-2 Manchester United
Garry Monk masterminded a victory at Old Trafford on the opening day but we think Louis van Gaal will come out on top at the Liberty Stadium this weekend. Manchester United have been doing enough to get the job done of late, and although their form on the road has not been so great, Swansea’s form has been pretty dismal of late.