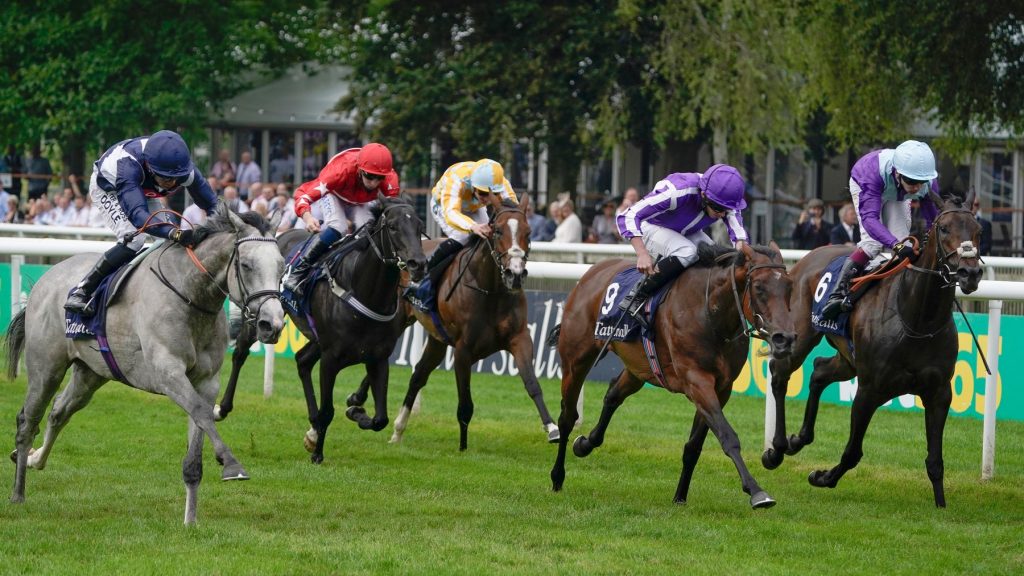 The feature race at Newmarket this Saturday is the 1m Group 1 Kingdom Of Bahrain Sun Chariot Stakes (2:55). This contest for fillies and mares has an illustrious roll of honour with Sky Lantern and Laurens among recent winners.

A daughter of the former tries to emulate her dam. For many, that is the story of this race on the Rowley Mile at the Headquarters of British Flat horse racing. It takes a class filly or mare to win the Sun Chariot as seven of the last eight victors had a rating of 114 or higher. Only two of the 13 declared runners fulfil that criteria this year.

Course and distance experience is another essential ingredient. Again, seven of the last eight Sun Chariot Stakes winners had a win on the Rowley Mile or over the trip on the July course. The unique Newmarket dip can unbalance horses, so handling that and the straight track are key considerations for punters.

Why Snow Lantern is favourite in the Sun Chariot betting

Snow Lantern is the aforementioned daughter of 2013 winner Sky Lantern. The family honour is at stake eight years later with trainer Richard Hannon Jr seeking a second win in three renewals. The yard saddled Billesdon Brook to success in this in 2019. In Snow Lantern, they have a three-year-old daughter of Frankel who landed the Falmouth Stakes here at the July Festival on her fourth start of the season.

Bred in the purple, Snow Lantern needed every yard of the mile trip to win. Her half-length success over re-opposing rival Mother Earth may be the best form on offer. The ground was good to firm that day, however, and the Sun Chariot Stakes looks certain to be on a softer surface. Snow Lantern’s form on going easier than good reads 234.

An unlucky second but strong at the finish in the Coronation Stakes at Royal Ascot, she turned the form around with Alcohol Free – a notable absentee from the Sun Chariot – in the Falmouth. In open company during the Sussex Stakes at Glorious Goodwood, Snow Lantern only ran third and nearest at the finish to her old rival. She was no match for Baaeed or older colts Order Of Australia and Victor Ludorum in the Prix du Moulin at Longchamp last time out either.

The way that Snow Lantern shapes, she may want further than a mile now. Bookmakers have her favourite because she top official ratings off a mark of 115. Her mother may have the won the race but her place at the head of the market isn’t as solid as it first appears. William Hill are a top-price 11/4 about Snow Lantern emulating Sky Lantern with Sun Chariot success.

Back Snow Lantern with William Hill

Aidan O’Brien saddled two of the last five winners of this race, so Mother Earth commands respect. She has been highly consistent this season, hitting the frame on all six starts. Every one of those came in Group 1 company. Mother Earth, a three-year-old daughter of Zoffany, scored 1000 Guineas success over course and distance on reappearance.

She then was a gallant runner-up in the French equivalent at Longchamp. Mother Earth filled third in the Coronation with just a neck between her and Snow Lantern. In the Falmouth, she found herself short of room approaching two out. Regular jockey Ryan Moore had to switch Mother Earth at a key stage and she went down by half-a-length.

These are fine margins between her and Snow Lantern. When pressed inside the final furlong in the Prix Rothschild at Deauville on her penultimate start, Mother Earth found more and prevailed by a head. There was a lot to like about her attitude on a soft surface that day. Mother Earth got no luck in-running whatsoever on Irish Champions Weekend last time out, though.

After making headway off the home turn at Leopardstown, she found no way through. Mother Earth was then hampered in the final furlong and again denied a clear run eventually finishing a close-up third. Granted a less troubled passage, she looked the winner of the Matron Stakes. The Sun Chariot is a chance for compensation, so Mother Earth is 7/2 with Boylesports to get it.

Back Mother Earth with Boylesports

Jane Chapple-Hyam has always held 1000 Guineas runner-up Saffron Beach in high regard. Building on her second place in Classic company over course and distance in the spring hasn’t been easy, however. This three-year-old New Bay filly didn’t have it in her breeding to get the trip of The Oaks at Epsom. That run should be disregarded.

Saffron Beach is a miler, but got squeezed out of the race in the Falmouth. Two below par runs left her with questions but she bounced back to form with an easy success at Sandown. That came in the Group 3 Atalanta Stakes towards the end of August. The form has a good look to it too as both the runner-up and third home have won since.

Going back to the highest level demands more but Saffron Beach won here twice over 7f as a juvenile last autumn. Those course successes mean it’s no surprise that she is third best in the Sun Chariot Stakes betting with Parimatch going 8/1 about her chances and paying four places. On the pick of her form, Saffron Beach is definitely worth an each-way bet.

Back Saffron Beach at Parimatch

No Speak Alexander looks to follow-up

Irish trainer Jessica Harrington had a magnificent September with both her Flat runners and jumpers. Matron Stakes winner No Speak Alexander survived a stewards’ enquiry, but may find following-up in deeper waters tricky. Three-year-olds dominate the betting, because they receive 3lb weight for age from their elders.

No Speak Alexander won her reappearance and then ran third in the Irish 1000 Guineas. Conditions were desperate that day; so, provided the ground doesn’t get that heavy, her weakness at the finish may be ignored. A luckless run in the Prix Rothschild followed a midsummer break. No Speak Alexander was badly hampered two out and all chance went.

Her Group 1 success at Leopardstown last time out was deserved, but she was all out to win. The Sun Chariot Stakes is tougher too. No Speak Alexander is 9/1 with most firms with Boylesports among those paying four places. Of the others, 1000 Guineas third Fev Rover caught the eye when a fast-finishing second in the Boomerang Mile but may need further or riding more prominently.

Back No Speak Alexander with Boylesports