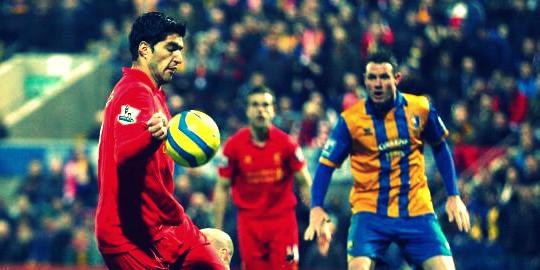 Liverpool striker Luis Suarez has been criticised for his handball winner against Mansfield Town in the FA Cup.

Liverpool secured a 2-1 win away from home thanks to the winner from Suarez with a blatant hand ball during the goal.

Suarez was running with the ball at pace, hit a shot which rebounded off the goalkeeper causing him to nudge the ball forward with his hand before slotting home Liverpool’s second goal.

Mansfield players reacted furiously surrounding the referee and officials who didn’t see the incident as deliberate leading to the suggestions that Suarez should have owned up to the mistake.

Brendan Rodgers has jumped to the defence of his player suggesting it was a natural reaction to the rebound and also stating that it’s not the job of the player to own up to a handball.

Rodgers told ESPN after the match:

“It’s not been deliberate as it’s pushed up and hit his hand. It’s up to the officials to decide that.

There’s no doubt it was handball, but the referee and the officials ruled it wasn’t deliberate.

I spoke to the fourth official – he said it was [handball] so I can only assume they thought it wasn’t deliberate.”

Critics today have suggested that Suarez should have conducted himself in a more sportsmanlike way by deliberately putting the ball wide over slotting it home. The goal put Liverpool 2-0 up before Mansfield pulled a goal back towards the end of the match.

This is not the first time Suarez has been criticised for his handball antics. During the 2010 World Cup he was shown a straight red card for punching a ball off the line in a crucial match against Ghana.

The resulting penalty in that game was saved meaning Suarez had effectively sacrificed himself for the survival of his country in the competition.