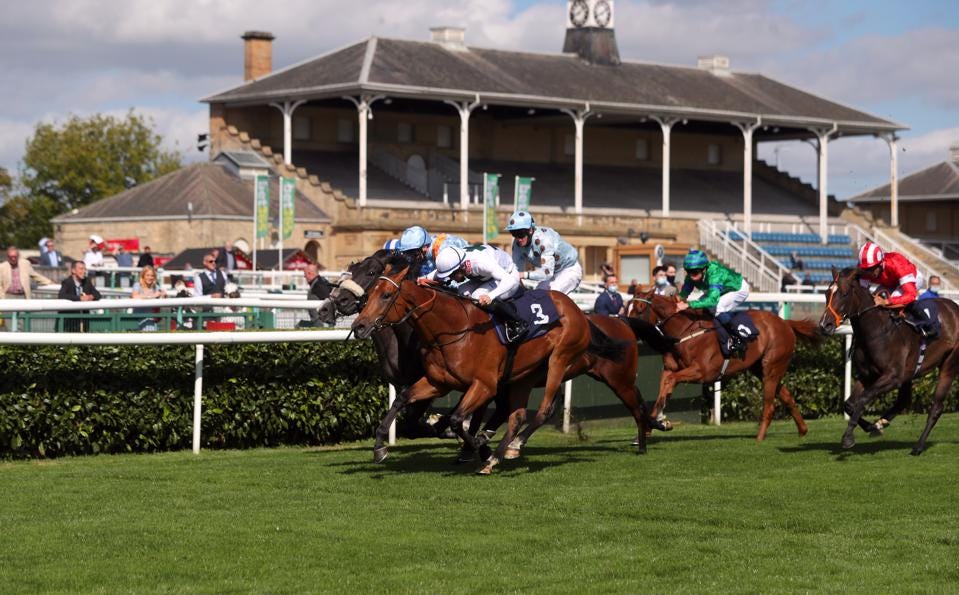 The centrepiece of the Doncaster St Leger Festival is the meeting’s eponymous race and final Classic of the season over an extended 1m 6f on Saturday, 11 September on Town Moor (3:35).

What makes this year’s renewal of the historic Group 1 event for three-year-olds colts and fillies so intriguing is that many of the key trials have been won by geldings. A field of 10 Cazoo St Leger runners are set to line-up on the track.

Nobody has a better record in the Leger over the last 20 years than Irish master trainer Aidan O’Brien with six wins. He saddles four runners in the world’s oldest classic and they’re much of a muchness really. That’s the impression official ratings give.

Those long-time powerful backers of Ballydoyle, “the lads” of Coolmore, supplemented High Definition for £50,000. The one-time ante post Epsom Derby favourite has questions to answer, however, to justify odds of 8/1 despite Frankie Dettori taking the ride.

High Definition shaped encouragingly enough when third in the Dante at York on reappearance. He only got going late in the piece, then ran no sort of race at all in the Irish Derby after swerving the English equivalent.

When returned to York for the Great Voltigeur last time out, High Defintion was only sixth behind a number of re-opposing rivals. O’Brien reaches for first-time cheekpieces, yet this colt by the late Galileo has looked anything but an easy ride.

The best of the Voltigeur form is represented by runner-up The Mediterranean but you could almost throw a blanket over the horses between him and the fifth home. Previous fourth place finishes in Group company wouldn’t be enough. The Mediterranean has only won a Leopardstown maiden, yet still posted a career best last time out and is 25/1 in places here.

A matter of Interpretation for Sir Lucan

Sir Lucan marked himself out as a Classic candidate with his defeat of Wordsworth in the Yeats Stakes at Navan on his second start of the campaign. The same race was taken en route to Doncaster by last year’s St Leger Stakes hero Galileo Chrome. Sir Lucan needed almost every yard of the 1m 5f trip of that Listed contest to get up and beat stable companion Wordsworth.

The runner-up has since placed in the Queen’s Vase, Irish Derby and Grand Prix de Paris, so the form isn’t too shabby. Ever since that outing, however, Sir Lucan has been back down in trip when the Camelot colt shaped like he needed further.

He gets that at Doncaster Racecourse after running out of time to chase down Ottoman Emperor in the Gordon Stakes at Glorious Goodwood and then being involved in that bunched finish for the minor honours in the Voltigeur. At 18/1 with Parimatch, Sir Lucan may just be the best each way value in the St Leger betting this year.

Bet on Sir Lucan each way at Parimatch

The fourth and final Ballydoyle inmate contesting this Classic is the in-form Interpretation. Owned by Peter Brandt, this colt like Sir Lucan has won over further than a mile-and-a-half. That’s an obvious plus for this particular horse race.

Interpretation has three wins from three this season, progressing up in distance and grade each time. He hasn’t beaten much and likes to go from the front, so this requires another big step up but hitting the frame could happen. That is reflected in a general 14/1 price.

At the head of the market is Irish Derby hero and Grand Prix de Paris scorer Hurricane Lane. The fact that the Godolphin runner has won the same races taken en route to Leger glory by recent Classic victors Capri and Kew Gardens stands him in very good stead.

This form, as well as victory in the Dante earlier in the season and a fine third in the Epsom Derby, sets a clear and obvious standard. On official horse racing ratings, Hurricane Lane has 6lbs and upwards in hand on his nine rivals. At odds-on at 8/11 with 888Sport in the St Leger betting here, however, the question of value rears its ugly head.

Bet on Hurricane Lane with 888Sport

There is no doubt that Charlie Appleby’s charge and the mount of William Buick is the best horse in the race on paper. The way in which Hurricane Lane stayed on stoutly and overhauled Lone Eagle to win the Irish Derby was impressive. The only negative with him is the price. With that wonderful thing, hindsight, the time to back Hurricane Lane to get value was between his runs in the two British Isles Derbies.

Mojo Star finished in front of the red-hot jolly when second in The Derby and has since shed the maiden tag. If taking the Epsom form literally, then the Richard Hannon inmate looks overpriced at 15/2 with William Hill to go one better in the St Leger under Rossa Ryan. Supporters of Mojo Star will point to the fact that he got no run at all in the Irish Derby when hampered at a key stage before staying on into fifth.

The aforementioned Ottoman Emperor is four from five for trainer Johnny Murtagh this season. An in-form horse always commands respect, but the Excelebration colt now steps up from an easy mile-and-a-half at Goodwood to a real stamina test in Yorkshire. His grandsire is from the family of Galieo, yet his overall pedigree suggests a mile rather than nearly double that would be optimum.

Ottoman Emperor didn’t land the Gordon Stakes, a race won in recent years by Ulysees, Crystal Ocean and Cross Counter by accident, though. As Doncaster St Leger trials go, this hasn’t proved that useful in recent years with the last horse to win both being Conduit in 2008. There is a case against Ottoman Emperor, despite a top-price 7/1 with BetVictor, that he may just find the extended mile-and-three-quarters that bit too far.

Last year’s Leger winning jockey Tom Marquand again rides the Chester Vase winner Youth Spirit, who would appreciate a bit of cut in the ground. After finishing eighth in the Epsom Derby, this Camelot colt was an unlucky fourth in the Gordon when short of room close home.

Youth Spirit improved on that with a fine third in the Voltigeur for trainer Andrew Balding, who is having a fine season and saddled the Leger runner-up Berkshire Rocco 12 months ago. That one ran well at a big price. Youth Spirit is 33/1 with Betfair to emulate his stable companion.

Donnacha O’Brien and Ralph Beckett runners Fernando Vichi and Scope are rank outsiders in the market. The Mediterranean may have improved past the former since their last encounter in the Nijinsky Stakes at Leopardstown.

Scope, meanwhile, beat Mojo Star as a juvenile but hasn’t scored since. Both need career bests on all known form to get close to the frame.