Tottenham Hotspur are looking to make a smart January move for yet another Argentine star – Ezequiel Lavezzi.

The 28-year-old has dropped down the pecking orders at the Parisian club following the arrivals of Edinson Cavani from Napoli in the summer. 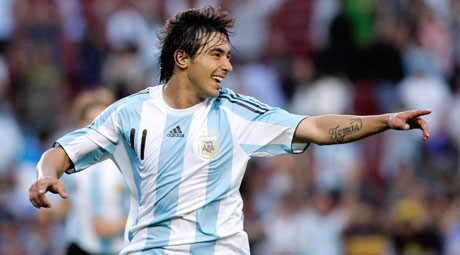 Lavezzi, who scored a brace against Peru in the World Cup Qualifiers on Friday for Argentina, has become the prime target of Tottenham, as per reports from The Metro.

According to the report, Lavezzi is out-of-favour at Paris Saint-Germain and therefore is looking for a move to cement his world cup places. Spurs are leading the queue for his services, as the player would cost around £15m.

The former Napoli star has a wealth of European experience under his belt and Andre Villas-Boas knows that the Argentine would add significant quality either up front or on the wings.

However, one might wonder why Spurs would need another winger-cum-forward when they need to bolster in other areas of the pitch.

Spurs have an avalanche of wingers on their ranks. The situation is such that Argentine winger Erik Lamela and Belgian star Nacer Chadli are struggling to get regular games at the White Hart Lane.

In such a scenario, how would Villas-Boas accommodate yet another winger to the side? And if there is indeed any need for a striker, why would he go for Lavezzi who is not a typical no 9 by any stretch of imagination.

Secondly, the report says Lavezzi is out of favour at PSG. He has played in 8 (6 starts) out of 9 league matches (out-of-favour indeed!) for the Ligue 1 Champions and has played in both the Champions League matches as well. Plus, he has been playing regularly for his nation and scoring as well. So, should he need to fear too much about losing his place at the moment?

There has been nothing about this report in the French media, so the entire story doesn’t have a strong base to convince us, isn’t it?