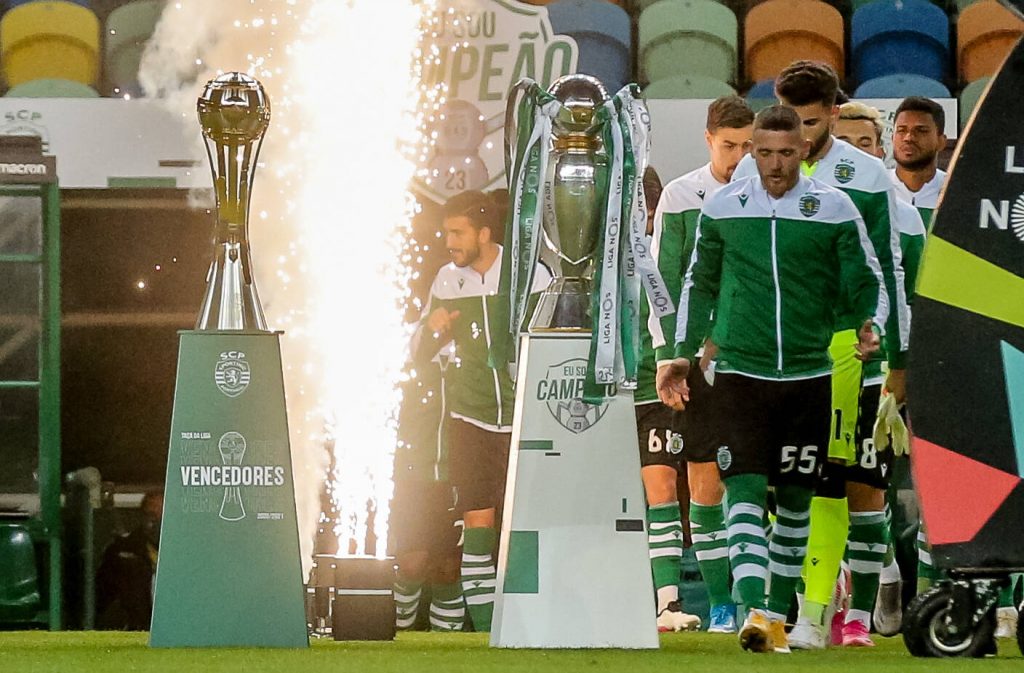 Portuguese champions Sporting Lisbon concluded their Primeira Liga campaign in style with an emphatic 5-1 victory at the Estadio Jose Alvalade against Maritimo on Wednesday night.

Fans flooded the streets of Lisbon just a week ago as Sporting clinched their first league title in 19 years, ending Benfica and Porto’s dominance in Portugal over the last two decades.

Aside from Saturday’s dramatic 4-3 defeat to Benfica in the Lisbon derby, it had been a thoroughly impressive campaign for Ruben Amorim and his men, winning 26 of a possible 34 games over the course of the domestic season.

Sporting have not looked back since going top of the league table in November, remaining there ever since, and going on to secure the Primeira Liga title eight points clear of runners-up Porto – adding to their League Cup success in January.

Os Leoes’ stellar season underlines the club’s rapid change in fortunes compared to just three years ago when a group of supporters attacked players and staff at the club’s training base.

Nevertheless, Amorim has reinstalled belief in Sporting since taking charge of the dugout in March 2020.

The 36-year-old has successfully built a squad beautifully balanced in defence and attack, brushing aside rivals Benfica and Porto to claim their 19th Primeira Liga title.

Verde e Brancos have flourished in a 3-2-4-1 formation this season, with the familiar back three of club-captain and former Liverpool and Sunderland player Sebastian Coates, Joao Pereira and Zouhair Feddal alongside goalkeeper Antonio Adan, conceding just 20 goals in 34 league outings.

Pedro Goncalves’ hat-trick against Maritimo ensured he finished top of the 2020/21 Primeira Liga goalscoring charts, pipping Benfica’s Haris Seferovic to the spot with 23.

However, the 22-year-old’s clinical season in front of goal has been aided by Sporting’s dynamic midfield, with Nuno Santos, Joao Mario and Tiago Tomas all playing influential roles in the middle of the park.

There have been several eye-catching displays throughout Os Leoes’ squad, and Amorim is set for a busy summer in the transfer market to ensure his side are ready to retain their league crown when the 2021/22 season kicks off in September.

With Sporting’s offensive offerings strong in Goncalves and Tomas, defence and midfield will be the area’s Amorim will be eager to strengthen in.

One of Amorim’s top priorities this summer will be to secure Joao Mario’s permanent transfer from Serie A champions Inter Milan.

Mario has rediscovered his form back in Portugal after a difficult spell in Italy following his €40 million move in 2016 and unsuccessful loan spells with West Ham United and Lokomotiv Moscow since.

The Portuguese has been a rock in Sporting’s midfield this season, making 34 appearances and registering two goals and two assists across all competitions.

The 28-year-old has been highly efficient in breaking down opposition attacks whilst instigating his sides’ offensive moves.

On Tuesday, the midfielder confirmed in an interview with Record that he would be more than happy to stay with Sporting, rejoining his old club on a permanent deal.

With Inter Milan facing serious financial difficulties courtesy of the coronavirus pandemic, the club are set for a mass exodus of their squad this summer, meaning Mario would be available at a reasonable price.

With the fee rumoured to be in the region of €8m, this would prove to be a steal for Os Leoes and one they cannot afford to miss out on.

Could Pedro Porro be used as part of a deal to tempt Sporting into selling Nuno Mendes?

Both young full-backs have starred for Sporting this season, playing influential roles in the club’s league title and cup success.

Left-back Mendes has made 45 appearances across all competitions this season and is expected to be included in Portugal’s squads for the Euro’s this summer.

The 18-year-old has caught the attention of both Manchester clubs, with the two Premier League giants expected to launch bids for Sporting’s golden boy in the coming weeks.

Despite club president Frederico Varandas willing to play hardball and only allow Mendes to go if his £60m release clause is met, the figure seems unrealistic with clubs across Europe recovering from the financial implications of the pandemic.

Pedro Porro has been a reliable figure throughout the 2020/21 campaign, registering 37 appearances across all competitions in the first season of his two-year loan spell from Manchester City.

The Spanish right-back has quickly become a fan favourite amongst the Sporting faithful, who will be keen to see their side secure the 21-year-old’s future beyond 2022.

A deal involving Mendes heading to City and Porro staying in Portugal permanently may be Verde e Brancos’ best bet.

Securing a promising talent for the long-term future whilst receiving a reasonable fee that could be immediately invested into other areas of the club.

Sporting have managed to replace star players in the past, most notably club captain Bruno Fernandes when he departed for United in 2020.

Penning Mario and Porro’s long-term futures to the Estadio Jose Alvalade would mark savvy summer business from Sporting, two players who were crucial to their side’s title success and would put them firmly on their way to defending their league crown when the new season kicks off in September.