Marcos Rojo has enjoyed a decent first season at Manchester United. He has settled in nicely at his new club and has established himself as a first team regular under Louis van Gaal. However, his transfer to Manchester United last season drew controversy (from Sporting’s side) and till date it has remained unsolved. But as things stands now, this week could be decisive in sorting out the financial dispute between Sporting and Doyen Sport Group that involved Court of Arbitration for Sport to solve the problem.

The hearing starts today and will continue till the end of the week, as claimed by Portugal newspaper A Bola. 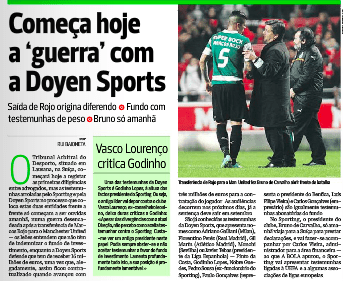 Doyen Group owned 75% of Rojo’s economic rights and following the Argentine’s €20m to United, the sporting group demanded their share in the deal. However, Sporting felt Doyen had forcefully acted upon during the transfer move, as a result the Portugal club refused to pay them the money they wanted.

It is a tricky situation. We get the feel reading regular newspapers that Sporting simply didn’t fancy paying them such a large chunk of the transfer fees. They are merely creating a big fuss putting a pressure on the Doyen Group, but the club could find themselves in trouble, if Court finds them guilty of breaching the promises made. Bruno de Carvalho, the club’s president, has done well to appease the fans till now (appointing Benfica coach Jorge Jesus, keeping William Carvalho at the club etc) and therefore he enjoys the full support of the fans. In fact, selling Rojo for €20m was seen by the Portugal press and the fans as a good move by the club.

Sporting believe they don’t have to pay anything to Doyen, while the sport group are still claiming a €16m compensation. The court procedure begins today in the Court of Arbitration for Sport – witnesses for Doyen include Galliani, Perez, and other important personalities.

The situation could be dangerous for Sporting, as their former president Godinho Lopes has been called as well to give evidence.