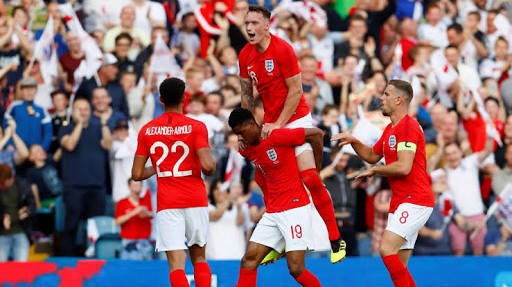 With less than a week to the start of the 2018 World Cup in Russia, many of the competing nations have played their final international friendlies before the action kicks off next Thursday.

In today’s news, Brazil are sweating on the fitness of a Manchester United-bound star who could well miss their competition opener.

A much-changed England side put in an impressive performance in Leeds on Thursday night, beating Costa Rica 2-0 – Gareth Southgate was gushing in praise for one man who is currently playing with a ‘swagger’.

In other friendly clashes, Portugal, Iceland and South Korea had contrasting fortunes.

Brazil face the prospect of being without midfielder Fred for their World Cup opener against Switzerland on June 17 after the Manchester United-bound star went over on his ankle in training on Thursday.

The South Americans’ team doctor said the Shakhtar Donetsk dynamo would be assessed today to determine the seriousness of the ailment.

United fans will be keen to catch a glimpse of Fred ahead of his proposed move to Old Trafford but may have to wait until later in the World Cup for the opportunity.

Brazil are likely to play with two holding midfielders at the competition, with Fernandinho and Casemiro also in contention for starting berths.

Goals from Marcus Rashford and Danny Welbeck capped an impressive performance from England on Thursday night, with a number of players in a much-changed Three Lions starting XI putting their hands up for potential inclusion against Tunisia next week.

The United forward opened the scoring with a superb effort in the first-half, before the Arsenal forward consolidated victory late in the piece. Ruben Loftus-Cheek also impressed again.

Gareth Southgate stated that Rashford was playing with a ‘swagger’ currently and that players such as the young forward had given him a selection dilemma ahead of the World Cup.

While Harry Kane is surely set to play as the lone striker in the 3-4-2-1 England side, Rashford could be a useful impact sub or supporting member of the team in Russia.

Portugal put recent inconsistent form behind them to win 3-0 against Algeria on Thursday night, with PSG winger Goncalo Guedes netting a brace in the win.

Cristiano Ronaldo featured for the current European champions, without scoring, with Fernando Santos’ men clicking before the tournament starts.

Iceland were 2-0 up against Ghana but were pegged back to 2-2 in their final game before taking on Argentina in Group D.

The result means the Scandinavians have not won in their last four outings, but Gylfi Sigurdsson looks fit to feature in the World Cup after playing an hour in Reykjavik.

Uruguay recorded a 3-0 win over Uzbekistan, with Luis Suarez getting on the scoresheet, while South Korea’s poor recent form continued as they were held to a 0-0 draw by Bolivia.

Get your tips in! The Sportslens Predictor competition is now open and bragging rights are at stake.