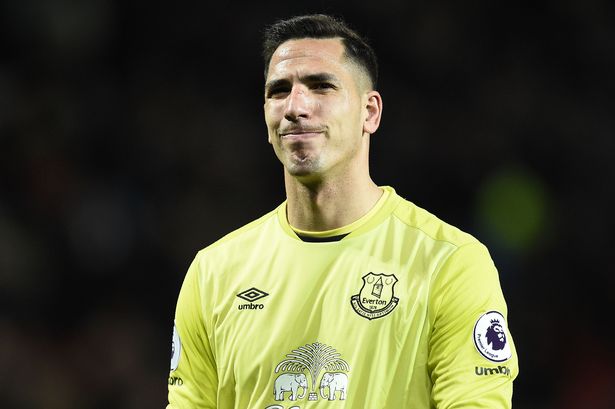 The 27-year-old’s contract at Everton is set to expire on June 30, and he is expected to join La Liga outfit Getafe this summer on a free transfer.

The Spaniard has been with Everton since 2014 but the Merseyside club are reluctant to renew his contract.

The Daily Mail reported yesterday that he was in talks with Getafe over a possible move. Robles is seeking regular first-team football after dropping behind Jordan Pickford in the pecking order at the club.

Robles managed 65 league and cup appearances in which he conceded only 78 goals and kept 25 clean sheets for the Toffees, during his five-year stay at the club.

Should Leeds United make a late move and hijack the deal?

The Whites are in the market for a top goalkeeper are reportedly considering Manchester City-owned goalkeeper Angus Gunn and Birmingham City’s David Stockdale as potential options.

The goalkeeping department is one where Leeds will be looking to bolster in the summer transfer window, and the Yorkshire club want someone who can be a direct competition for Bailey Peacock-Farrell.

Robles with all his experience and proven quality will be a superb signing for the club. However, he needs convincing and probably Leeds need to tempt him with a better wage package.