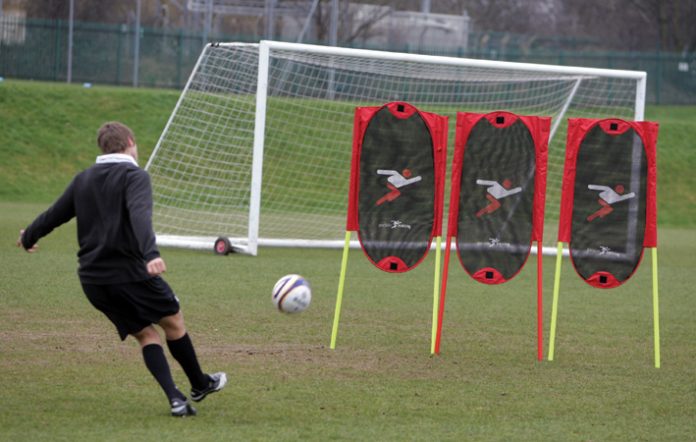 Direct free kicks aren’t the same as corners. A simple point, but important. For one thing, there is much less point being complicated when it comes to just taking a shot over a man wall on goal –  better to just concentrate on getting the ball on target then to dally and lose the oppurtunity over getting a nicer position. Yes Barcelona, in that semi final against Chelsea. Don’t think I’ve forgotten.

Still, theres plenty of trickery to be had about freekicks anyway, plenty of ways to fool the defence and goalkeeper, or to make his job harder. Therefore, this weeks article is a dedication, to those radicals out there who tried something different and succeeded, sometimes in high pressured situations. And more importantly, we shall analyse them, rather then just calling them brilliant and highly fresh. We need to learn don’t we?

So, rule number one. At free kicks, players can go unnoticed

Argentina vs England. Veron and Zanetti. (Skip to 6:15)

Pretty high pressure this. England 2-1 up, Owen roving and dangerous. Certainly, Argentina wouldn’t have wanted to be behind for too long. Enter Juán Sebastián Verón. Enter an Argentine masterpiece. The men in light blue won a free kick out side the England penalty area. One runner to feign a shot to ensure the wall was rooted in place. The next, Veron, sliding a pass beyond the right of the wall, to where Zanetti, who clung ninga esque to the back of the wall untill the perfect moment, turned and finished past Seaman as if he was playing in the park.

To this goal Zanetti was absolutely key. He makes himself inconspicous by implying he is part of the wall, making sure noone is going to be marking him, and thus making sure the move can happen. The move was perfectly choreographed behind the free kick too – bracing the wall for a shot an instant before the lay off. And a truely excellent example to begin the article with – a small weakness exploited to it’s maximum in a high pressure situation.

Rule number two. It’s how and where you hit the ball that counts.

Wolves largely haven’t had the gods smiling upon them this season, but if this pearler is a mark of anything it’s that football is not just the roll of dice.

They win a free kick very close to the goal – too close you could say – David Jones needs to get the ball up over an imposing Stoke wall and the down again under the crossbar which isn’t easy. So he cheats the wall – the assistantee rolls the ball back a half yard to Jones, which increases the length from the wall and critically, prescious more room for the ball to get up and over. Then in flicking the ball up Jones gives the ball a little extra height, adding to his ability to get it over the wall. Finally being able to volley the ball allows Jones to get the ball over the wall and then into the goal off the crossbar, without having to drive the ball to give it the power, without having the chip the ball to get it up and over. This well crafted volley is the best of both worlds, and it gives Wolves a good start to the season. Maybe they should try things like this more.

Barcelona vs Racing (I think) and others. Messi and Alves.

Skip to 1:06 on that video for my favorite example of the quick free kicks Barcelona just love to do, where the defenders loosen up and start preparing the wall for a free kick – only to have conceded another before the wall can even link arms. It’s so typical of that moment before free kicks, the irony that defenders in preparing for the potential trouble of a close range free kick completely switch off, and let Messi of all people start play again, giving Barcelona a prescious second in which to launch an attack before the defenders are properly in ship shape. And this, Barca have found to their benefit, seems to work on everyone, doesn’t it Real Madrid?

He’s a genuis, and we all know it. But in this case it’s a genius taking advantage of simple logic – that the quickest way to a place is always a straight line. Again we have a free kick (well dur) and this time there is no hiding player or catching the defenders off guard or flicking the ball up – here, Ronaldinho just takes advantage of the wall leaping in anticipation of the high free kick, leaving the space beneath their feet – and the straight line to the goal wide open. Simplicity achieved by genius.

Rule number four. I can use indirect free kicks in this article. So there.

And Aurelio had the same line of thought, in this football game anyway (He didn’t advise he on this article, sadly) And again, what a game in which to try the daring. Liverpool needed three goals, at the very least  in this quarter final clash at Stamford Bridge. And with Chelsea sitting back a little, this free kick fell to Aurelio, who everyone would expect to just cross the ball into the bodies in the box. Including Petr Cech, who drifted out towards his right to preapre to try and come for the ball. Very ill advised this – He could have easily just come off his line quicker when the cross was coming in. As it is, Aurelio considers the unlikely, and goes for it. In fact, that can be rule number five. The unlikely is less predictable. The unlikely can spark some truely amazing games.  Unlikely, is creative.

Rule number six. When the goalkeeper’s not looking, shoot.

Intelligence can be handy, and football can be cruel. Lille had Manchester held at arms length in this tense first leg for the Red Devils untill this free kick – which also shows us what a split second of Giggs noticing the keeper checking his wall can do. Asking the ref permission to take the free kick quickly, placing the ball and striking it took about one and a half seconds, and with the defenders failing to pay attention again the ball flew unchallenged into the right of Lille’s net, leaving United estatic, and the Lille players enraged. Well…it was a bit controversial. Lesson for defenders however – stand over the ball untill the wall is completed, and this sort of thing won’t happen. Hopefully.

Pirlo and Inzaghi, how you hurt me. This goal, deflected past Pepe Reina by Inzaghi’s hand shouldn’t have stood, and it changed the course of the 2007 champions league final, putting Liverpool a goal down in a game they couldn’t recover – but that’s not really the point, and neither is Inzaghi’s hand. The thing here is that people seem to look down on deflections these days, which they shouldn’t. Actually, Inzaghi’s run across that ball, the vital touch that beat Reina, was an excellent touch. Without it the shot is probably saved, and that’s the point. Shots should be making it hard for the keeper, and if players were to run across free kicks, subtly alter the course, they are doing that.

So there we are – free kicks do have variety. Of course there are lots of free kicks I haven’t mentioned – in fact in most free kicks there is some kind of tactical play involved. (Bayern Munich vs Manchester United, 1999 is another – can you spot it? Of course you can, that one’s easy) So that to an extent, is the final purpose of this article. You don’t always need a foot blessed by David Beckham or Juninho – creativity can break down any footballing barriers.