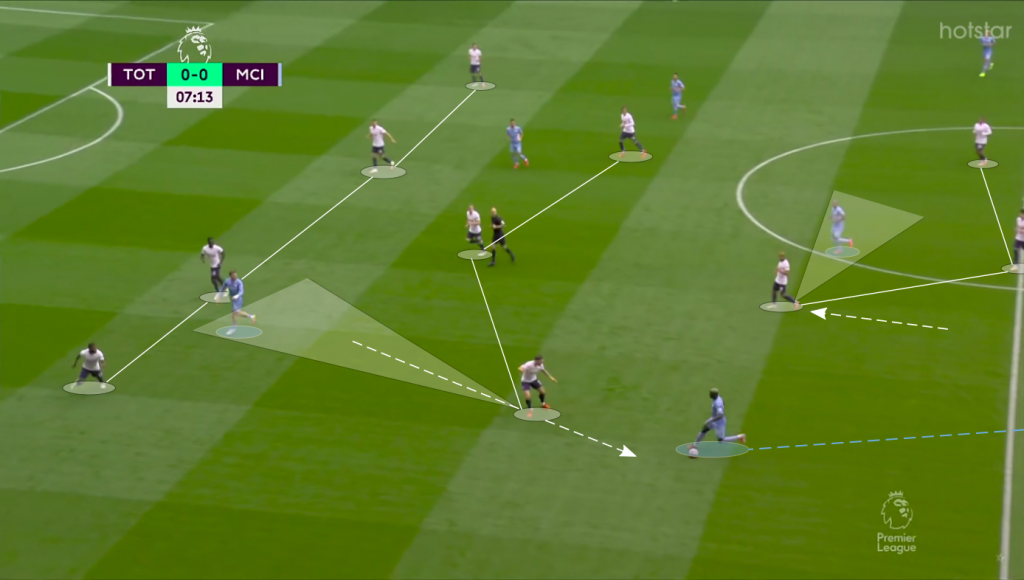 It just keeps on giving.

A very short pre-season and absence of many key players meant that City were not very comfortable going into this match, but they were expected to come out with a positive result given the incredible depth of their squad.

That was not to be, though, as Tottenham came away with a victory that could certainly be called deserved, though their visitors might feel that they should have done better to capitalise on some of their early opportunities.

As far as line-ups were concerned, there were no real surprises on either side as both went for a 4-3-3 on paper. 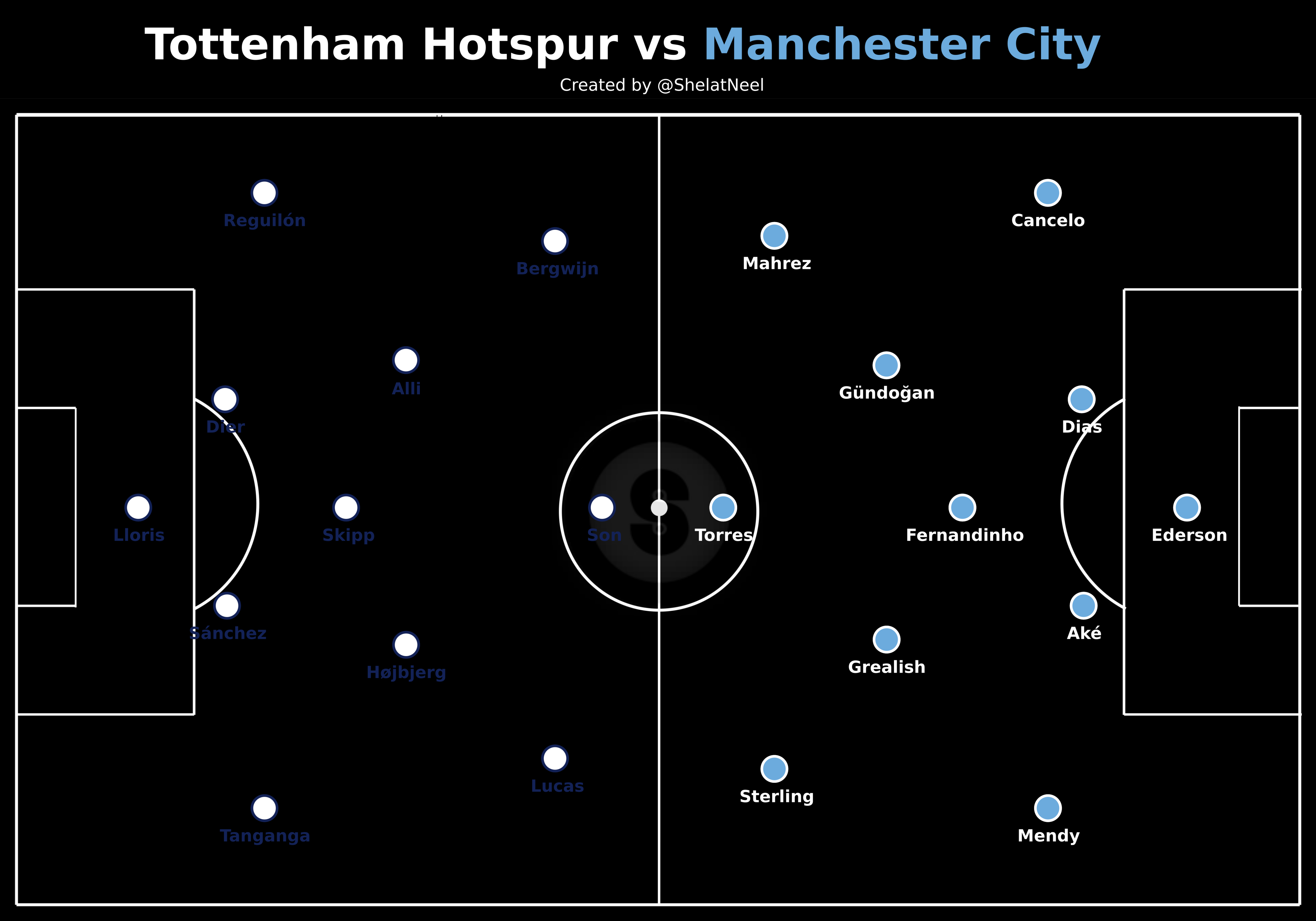 Initially, City looked to build up with a narrow back-four (something which was seen in their pre-season friendlies and the Community Shield), with Fernandinho as the sole holding midfielder, İlkay Gündoğan and especially Jack Grealish drifting between the lines, the two wingers hugging the touchline and Ferran Torres stretching the opposition back line. 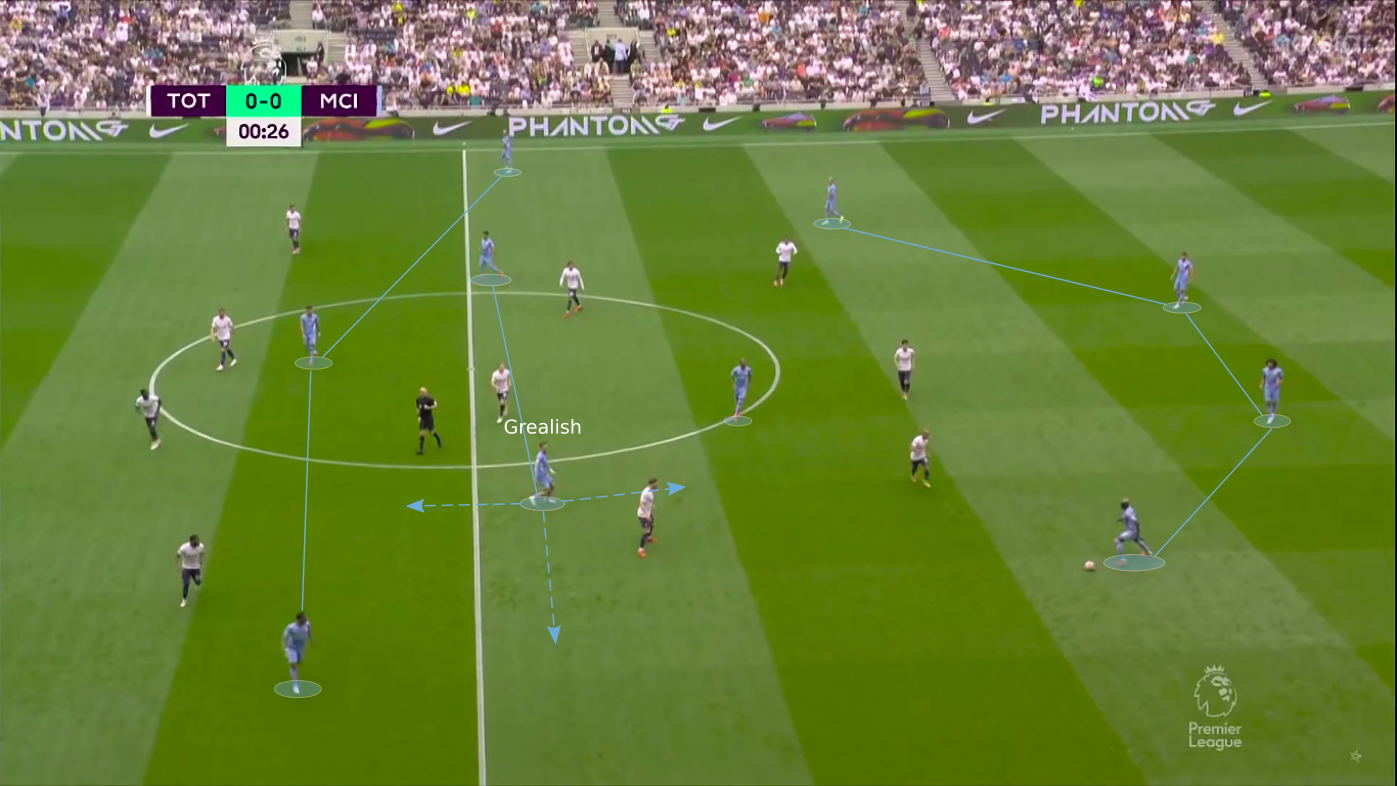 Tottenham defended in the 4-3-3, which was incredibly narrow. They had done the same thing to a fair amount of success in the most recent League Cup final, and again, the objective was to prevent City from progressing centrally by using the forwards to cut the passing lanes into midfield and have the wide midfielders mark their respective opposite numbers for good measure. 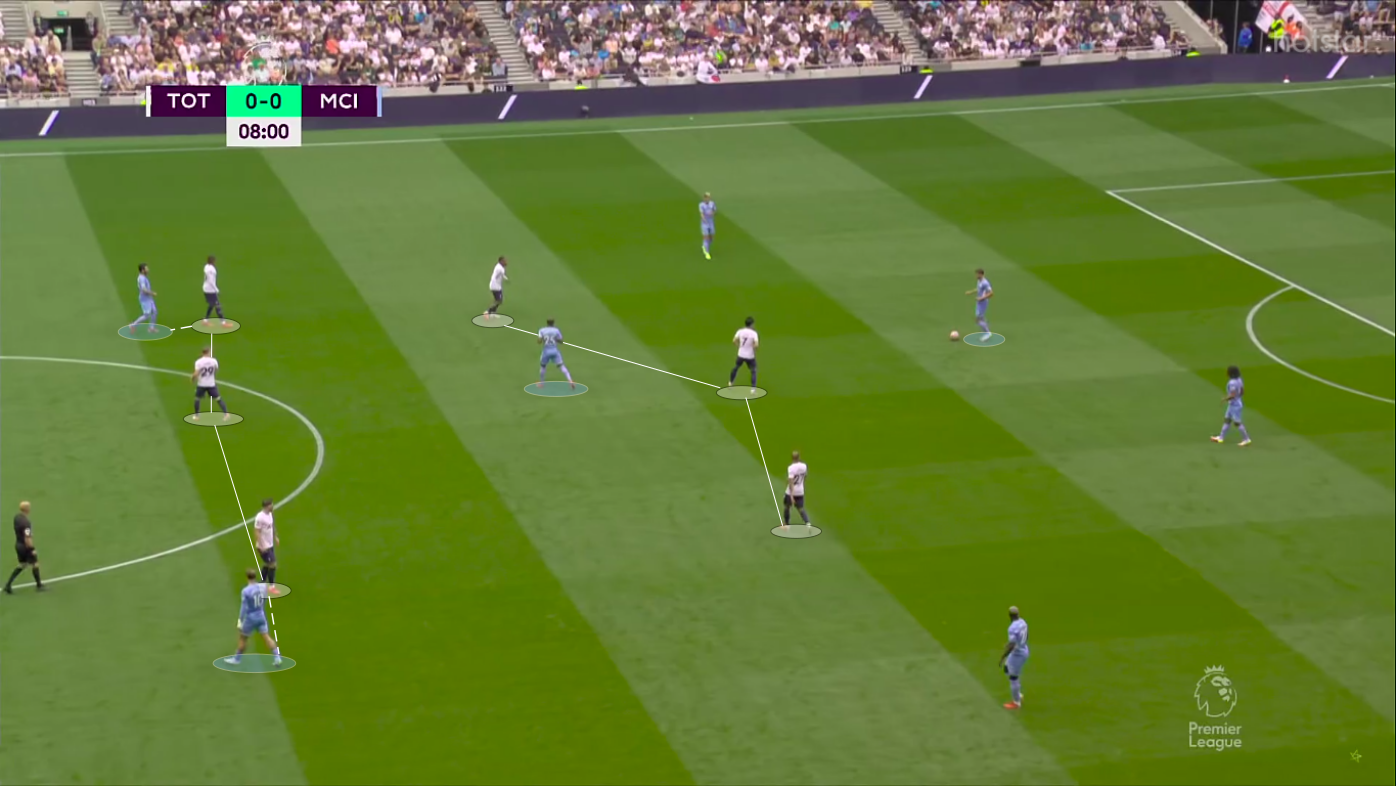 This naturally forced City to progress out wide using the full-backs. This is where the concerned wide midfielder for Tottenham would leave his man to close the ball down, keeping his counterpart in his cover shadow.

Meanwhile, the winger was responsible for preventing any passes from reaching Fernandinho. 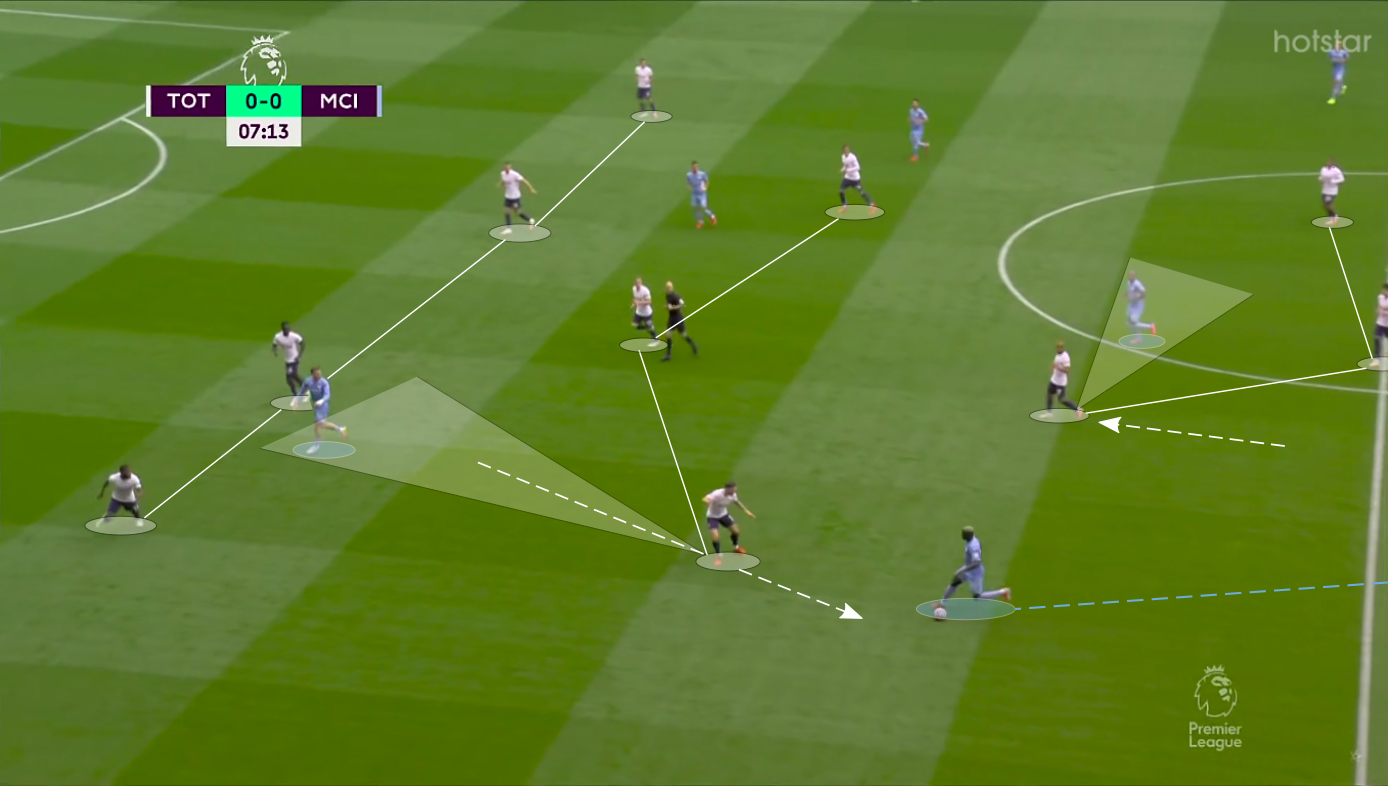 Nearly 50% of visitors’ moves came from the left wing because Gündoğan wasn’t quite as lively as Grealish, meaning that even when they get forward on the right, it ended with a long ball either to the opposite wing to switch play or sometimes to find Ferran Torres in behind the defence. 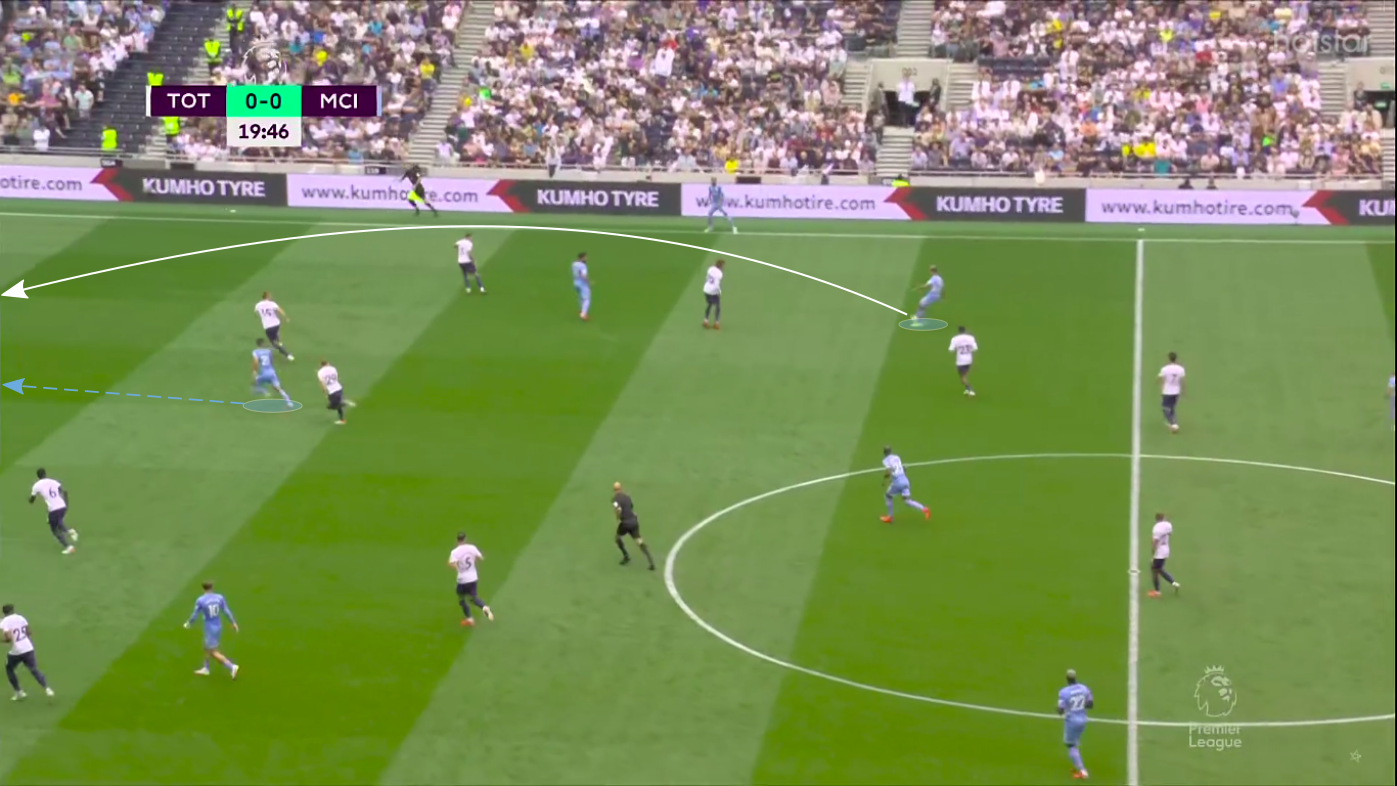 So, Spurs’ defensive focus was mostly on their right. Pierre-Emile Højbjerg was very strong defensively on the right of midfield, while Japhet Tanganga had a superb game at right-back where he basically fouled either Grealish or Sterling every time they tried to get around him on the wing.

He was dribbled past only once all game in seven attempts while never getting booked, so he clearly did a stellar job.

To add to this, though, Tottenham could also spring a counterattacking trap from the right of their defence.

If you had to sit down and make a list of Benjamin Mendy’s strengths, you certainly would not be writing one-on-one defending, so all Spurs had to do was win the ball back on that side and run straight at the City left-back.

His decision-making in possession helped the hosts at times too. In the previous instance, he decided to try and pass the ball through Højbjerg’s legs anyway, quite obviously getting it blocked.

Then, after going back to recover the ball, he tried to turn his opponent instead of playing a backpass, easily getting dispossessed and leaking a 4v3 for the rest of his defenders to deal with. 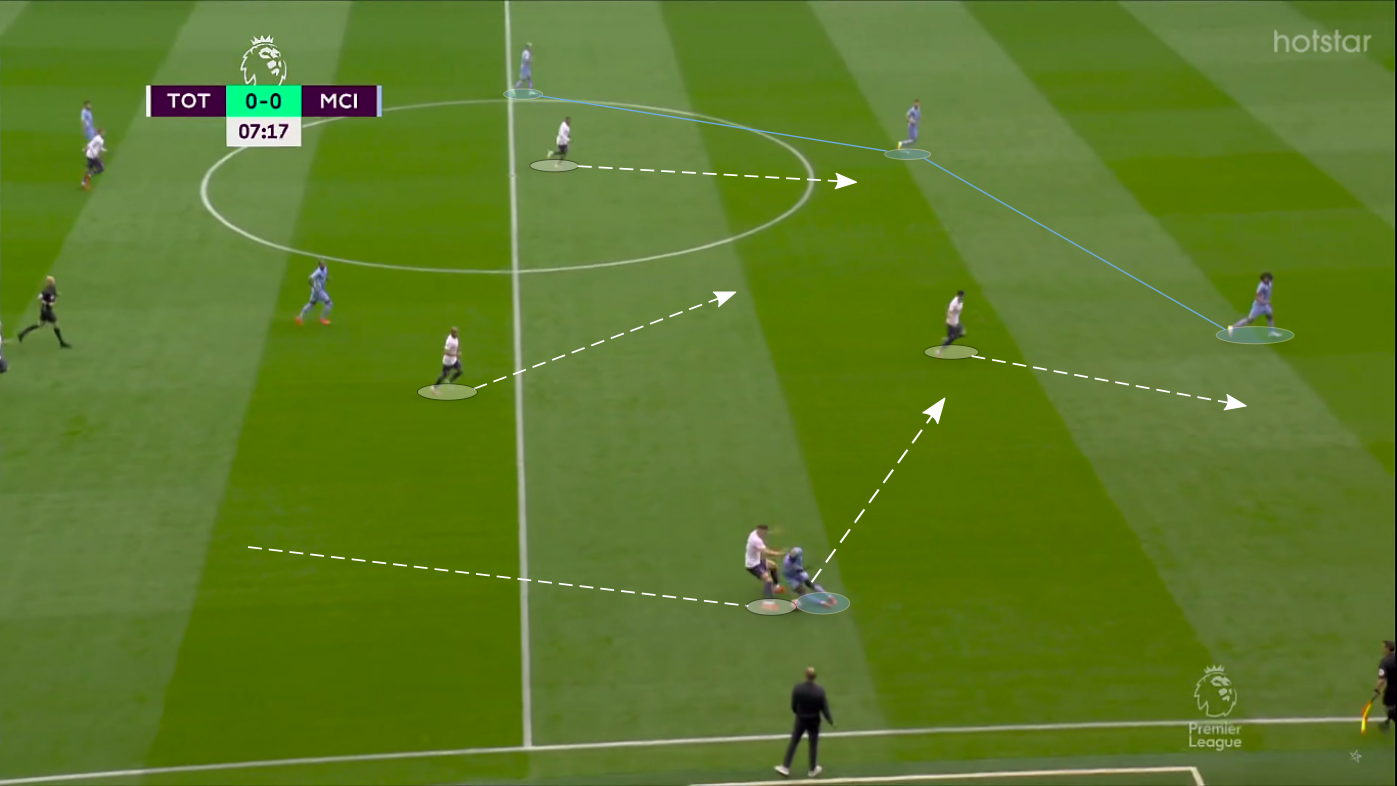 In this instance, the situation amounted to nothing as Son Heung-min rather wasted it by not putting the ball in the box first-time and then passing backwards and allow City to get into shape after Nathan Aké showed him onto his left foot. 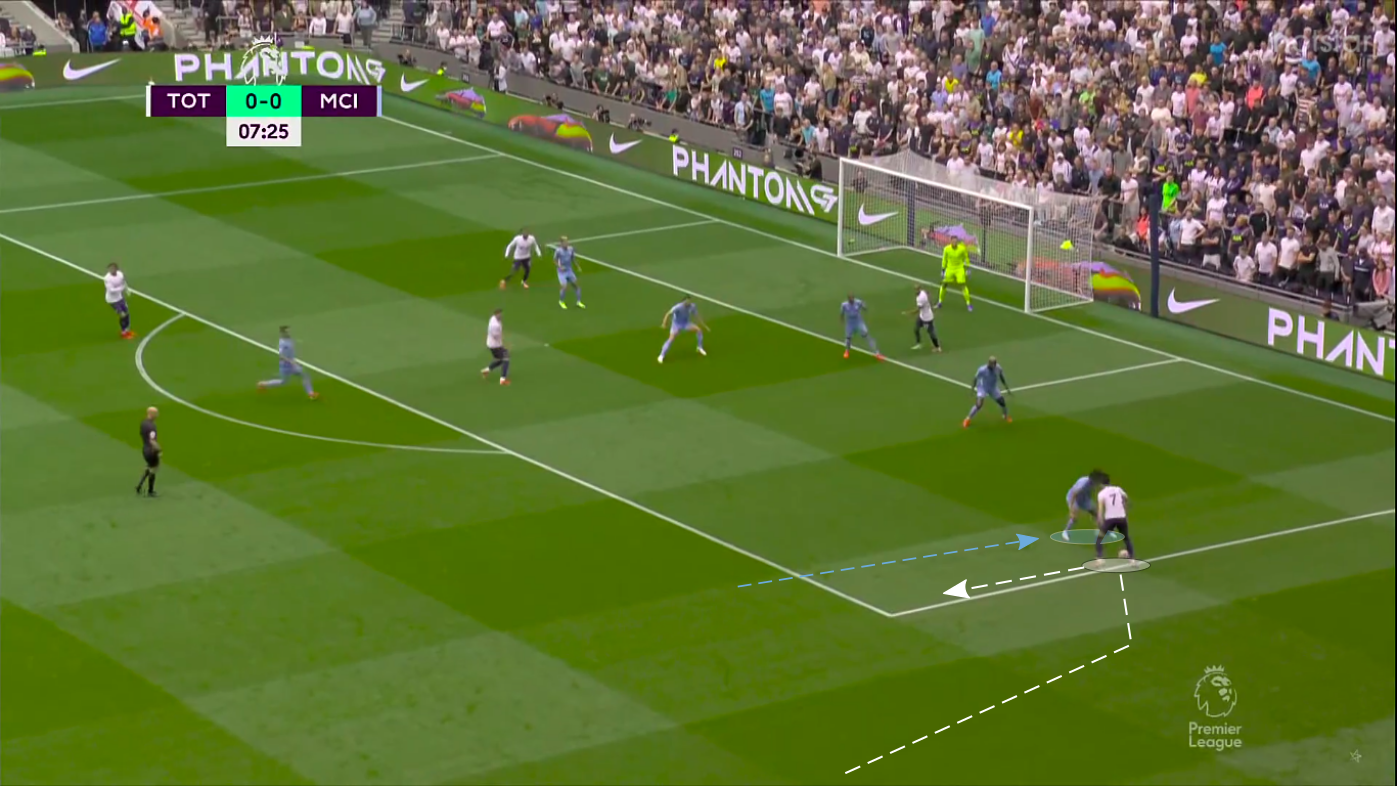 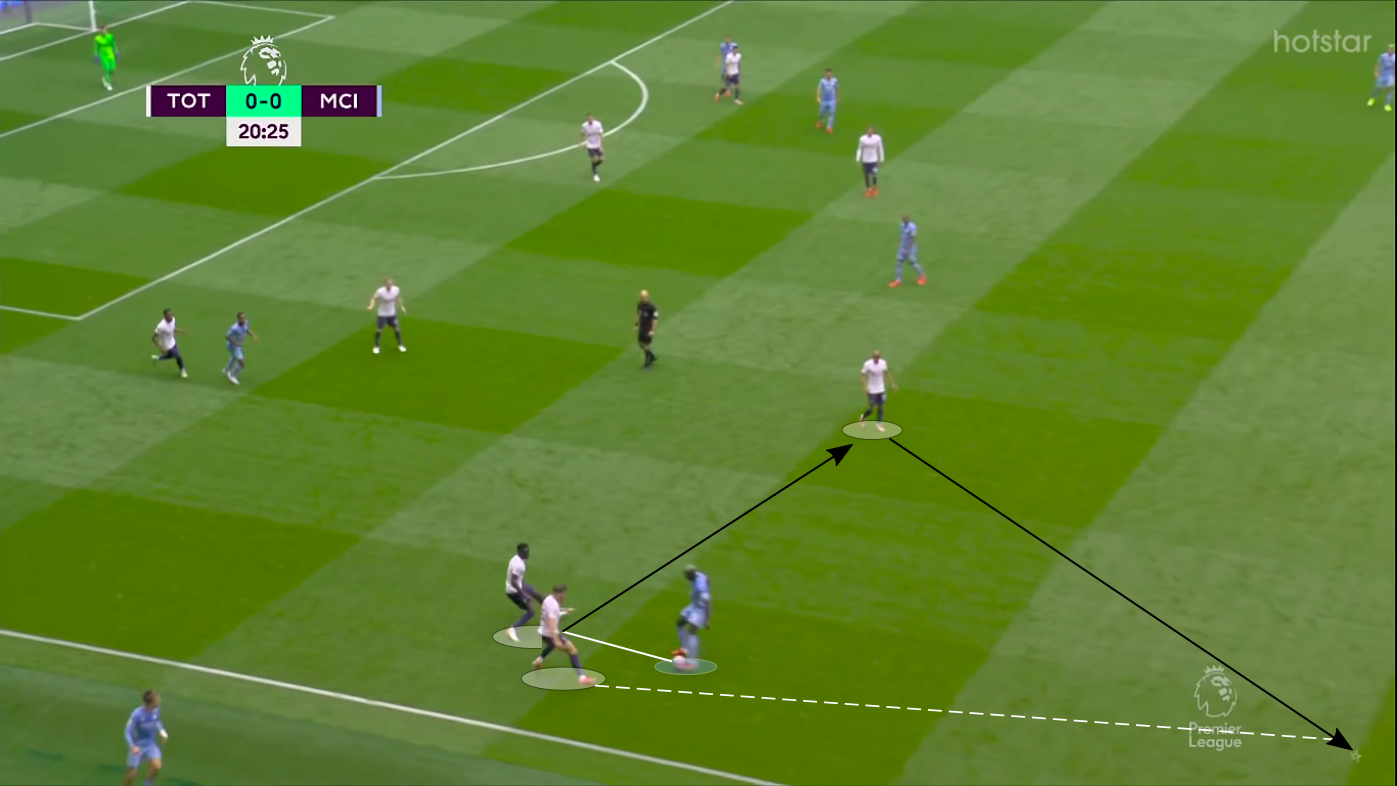 …which led to a 3v3 situation with Højbjerg motoring down the right again. 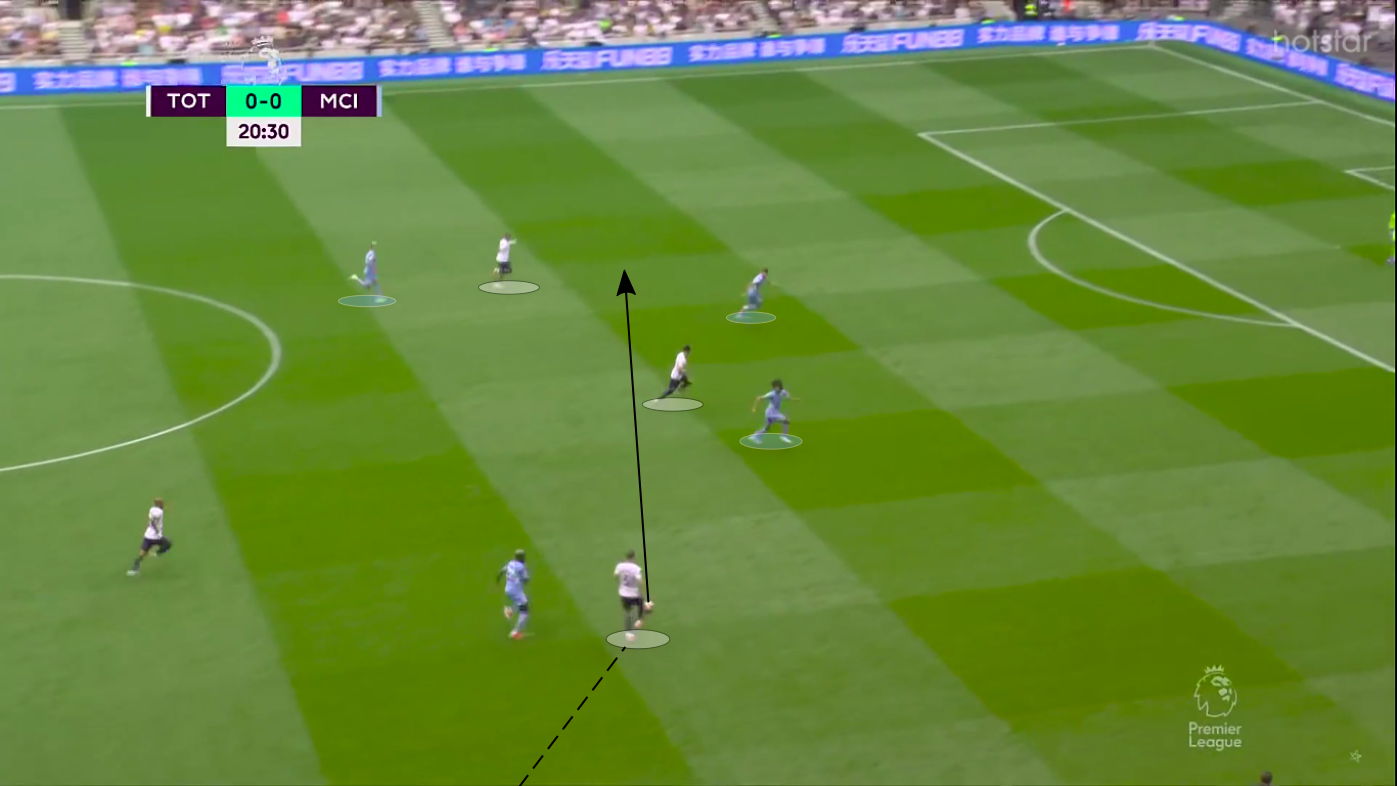 This time, he went inside to Steven Bergwijn, whose eventual shot went out for a corner via a deflection off Rúben Dias.

There were other ways for City to concede counter-attacks, including running into traffic. 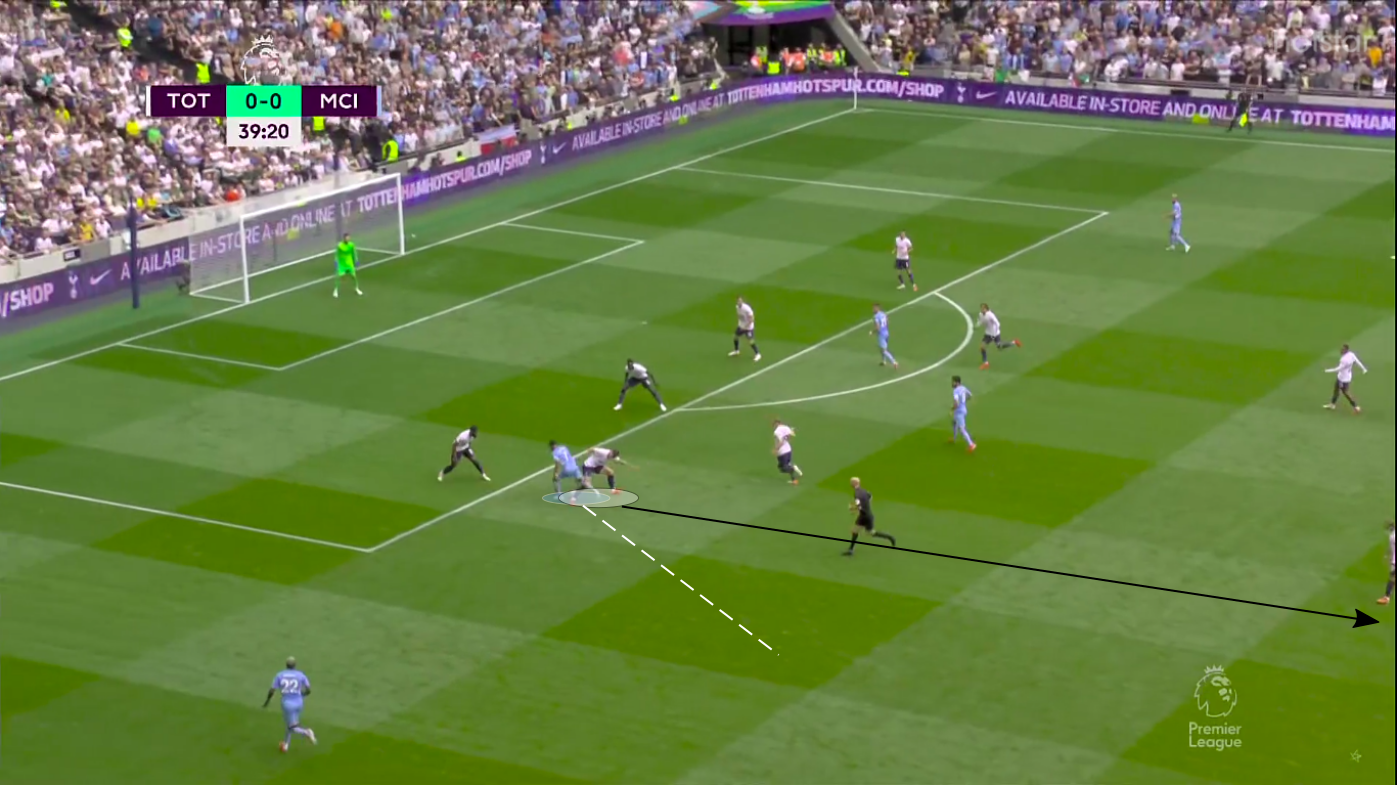 This particular move developed into another 3v3 for Spurs… 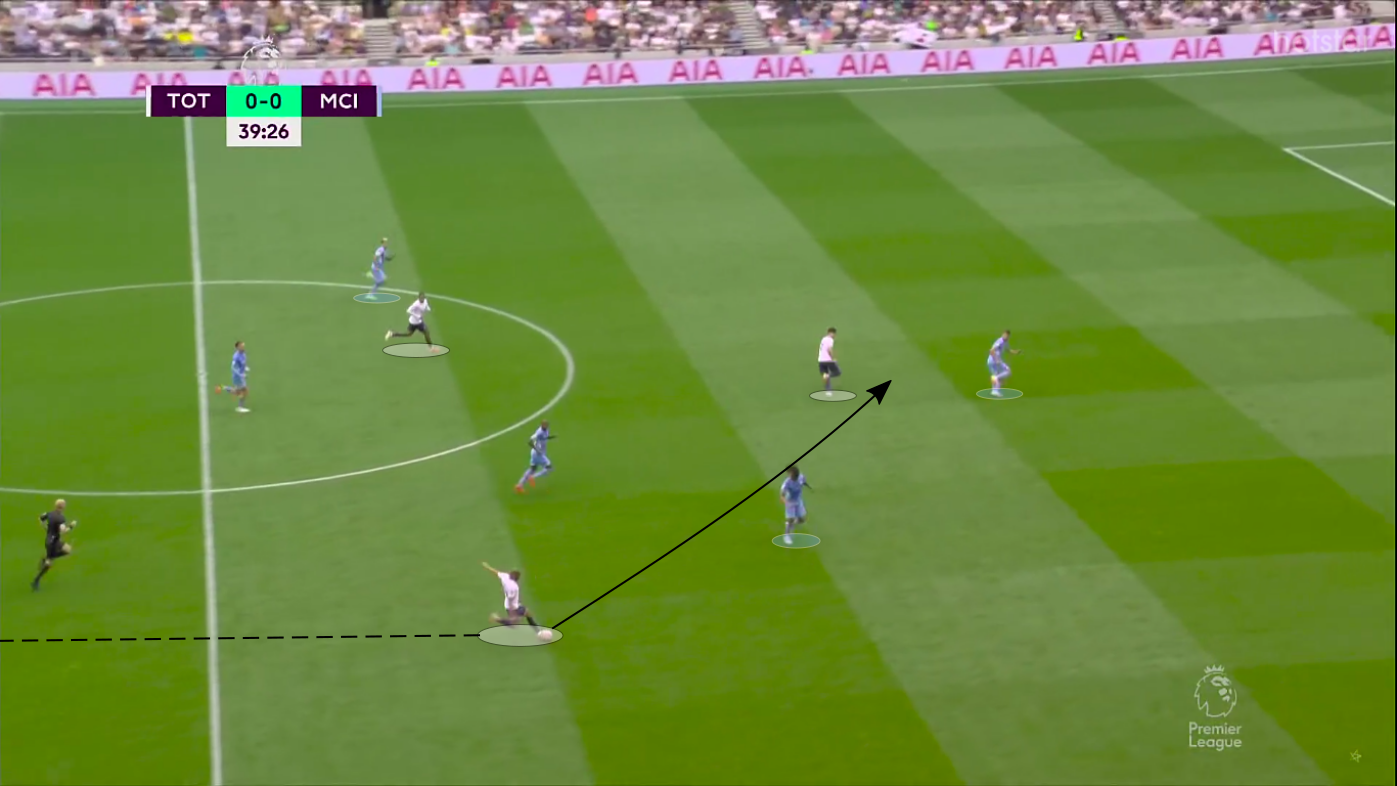 …which ended with Son’s shot being deflected wide, though the referee failed to see that. 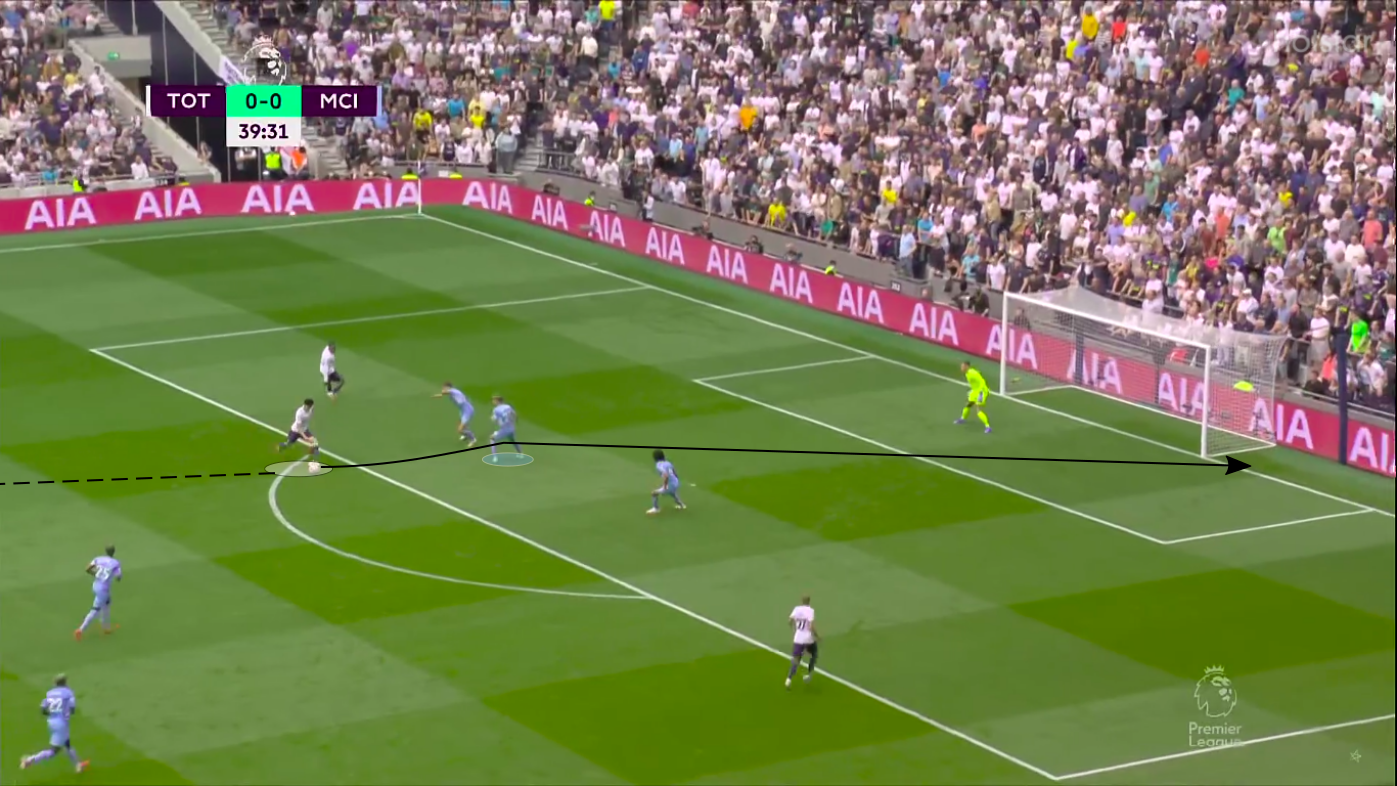 The only definitive way most of City’s attacks ended was through a cross, which was no problem for the Tottenham defence as they did not have any major aerial threats to contend with and could easily outmatch the visitors’ attackers with their defenders. 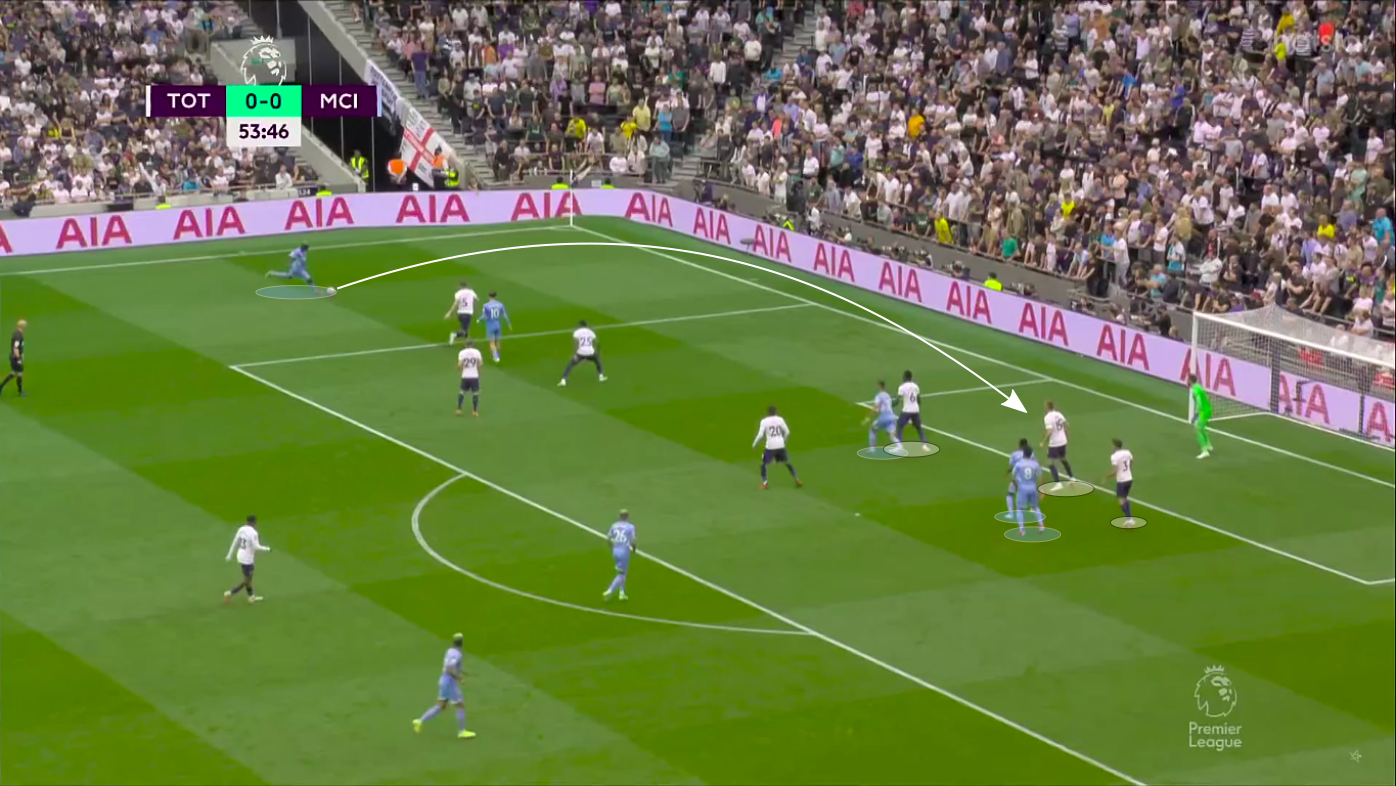 This was, again, an avenue to counter-attack if they won the second ball, as they did in the case of the only goal of the match. 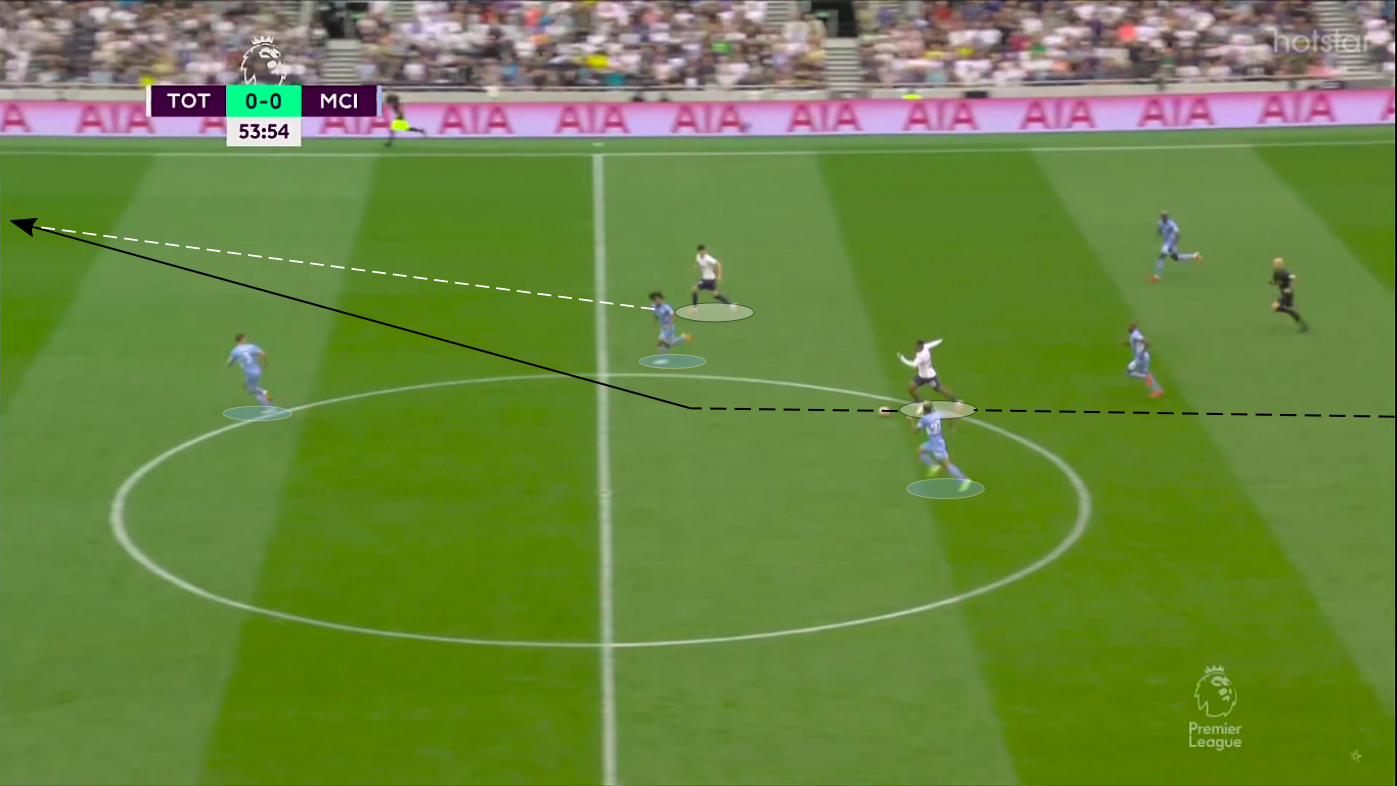 Ultimately, Son and Aké came face to face again, with the Dutchman happy to let his opponent cut onto his left after their similar previous meeting. 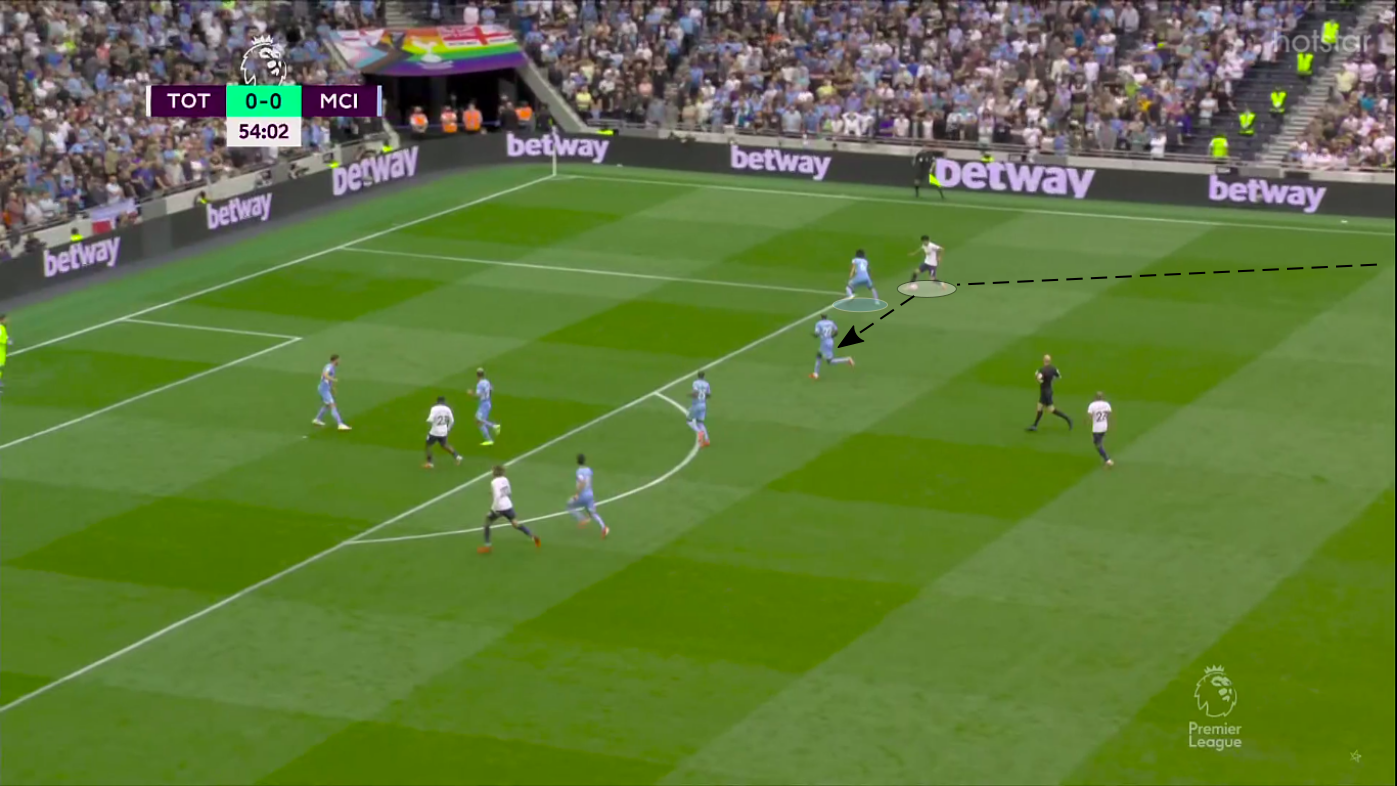 This time, though, he was in for a surprise, as Son let fly and picked out the bottom corner with a terrific finish. 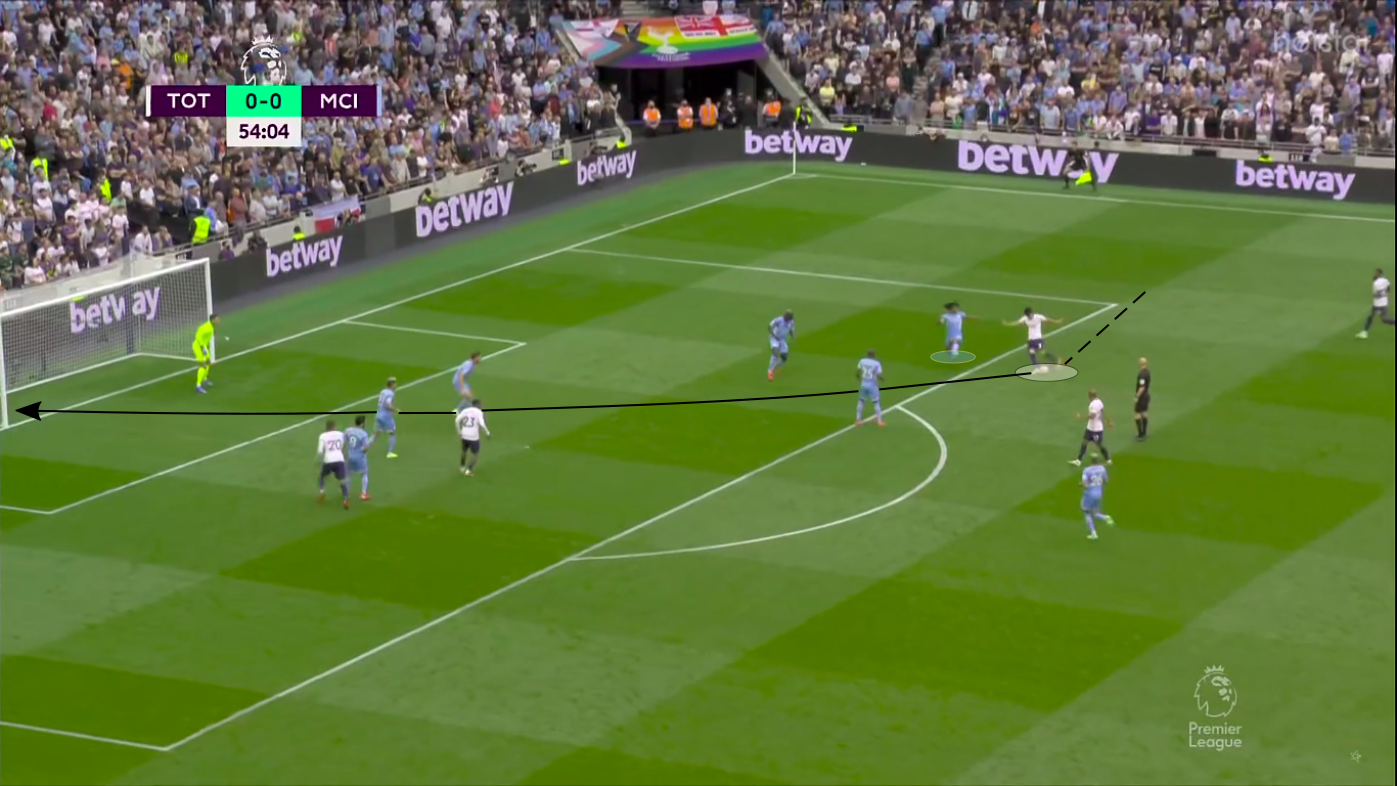 These were just a few instances, but City kept conceding counter-attacks throughout the match in one way or another. Should that be a cause for concern going forward, though? Probably not.

The visitors were missing two of their first-choice midfield trio here, and Fernandinho was uncharacteristically poor positionally throughout the second half.

Further, with the way they use inverted full-backs, Mendy is absolutely not suited to the role he was asked to play (which is why he looked very bad), while Kyle Walker’s recovery pace was sorely missed too.

Ultimately, though, this was the side that conceded the fourth-fewest shots from counterattacks last season behind just Brighton & Hove Albion, Chelsea and Liverpool despite averaging more possession than anyone else, so the return of their main men should easily fix the issue.

Their attacking play will obviously be solved when the likes of Kevin De Bruyne and Phil Foden return – we got a glimpse of that when the former was substituted on – and a new striker would be a cherry on top of it all, but probably not a complete necessity.

Tottenham, meanwhile, will obviously be very happy with this win, but the real tests for new manager Nuno Espirito Santo lie ahead because they were a good counter-attacking team previously too and got the better of City in this manner on several occasions, but it was when they had more of the ball that they struggled.

We saw very little of that here, so it is impossible to comment on how their season might go, but undoubtedly there was no better way for Tottenham to start it than this.