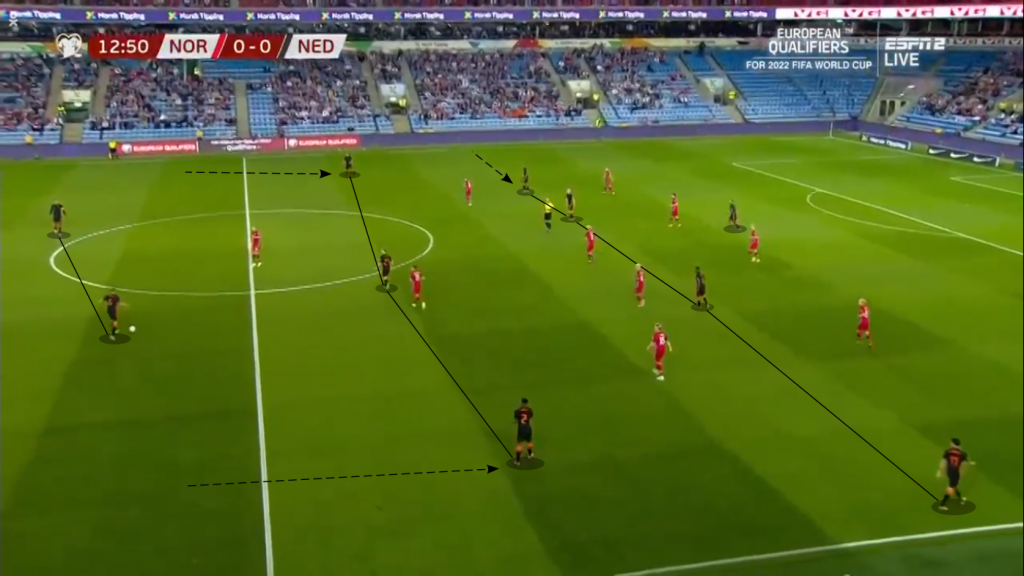 Just over seven years after the end of his last stint with the Dutch national team, Louis van Gaal was back again.

This time, he was replacing Frank de Boer, who faced the sack after a disappointing Euros campaign that was riddled with tactical issues. His job was, of course, to fix those problems, and the first chance he got to show some of his work in practice came against Norway in Group G of the European Qualifiers for the 2022 Qatar World Cup.

Heading into the match, the Netherlands were second in their group and just a point behind leaders Turkey, but with both their opponents on the night and Montenegro level on points with them, a win was imperative to keep their qualification campaign on track.

The first thing we got to see was, obviously, his line-up, which saw a number of key figures from the Euros dropped to the bench. The ex-Manchester United manager has always been an advocate of using players from the Eredivisie for the national side, and that was evident once again as six of his chosen XI play their club football in the Netherlands. 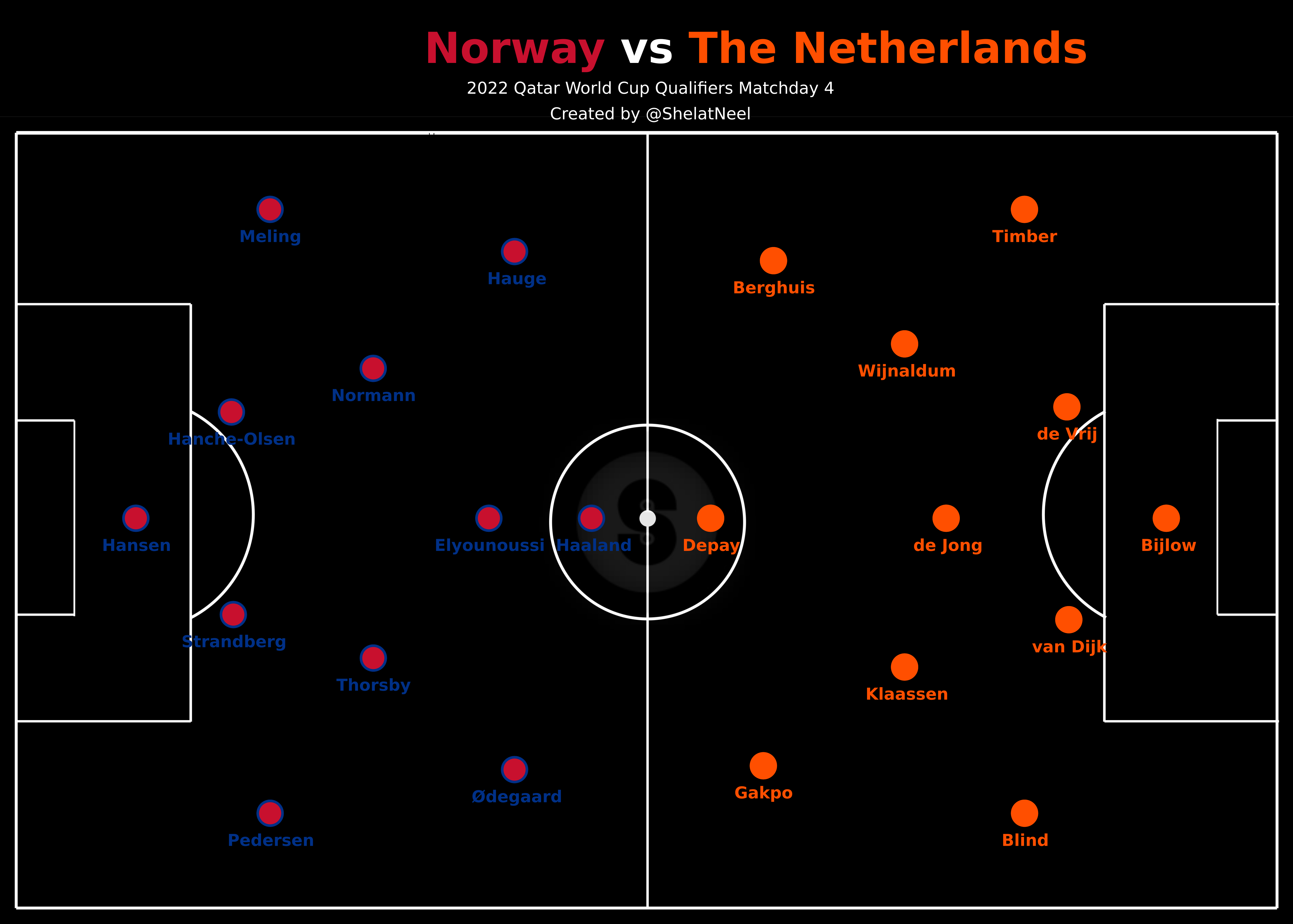 Even more noteworthy was the switch in formation to a 4-3-3 after de Boer had stuck to a back-three system for most of its tenure. This is, of course, where all the tactical differences start to stem from, and we will be exploring them in this analysis.

In the build-up phase, they did not have to worry about any Norwegian pressure. Their shape remained largely unchanged in what can basically be described as a 2-3-4-1, with Frenkie de Jong sometimes dropping in between or to one side of the centre-backs and the full-backs getting forward. The other two midfielders got forward and positioned themselves between the lines, where Davy Klaassen’s positioning was more central than that of Georginio Wijnaldum because Cody Gakpo stayed fairly narrow on the left while Steven Berghuis often hugged the touchline on the right. Memphis Depay, as always, had the freedom to drift around and move into the channels. 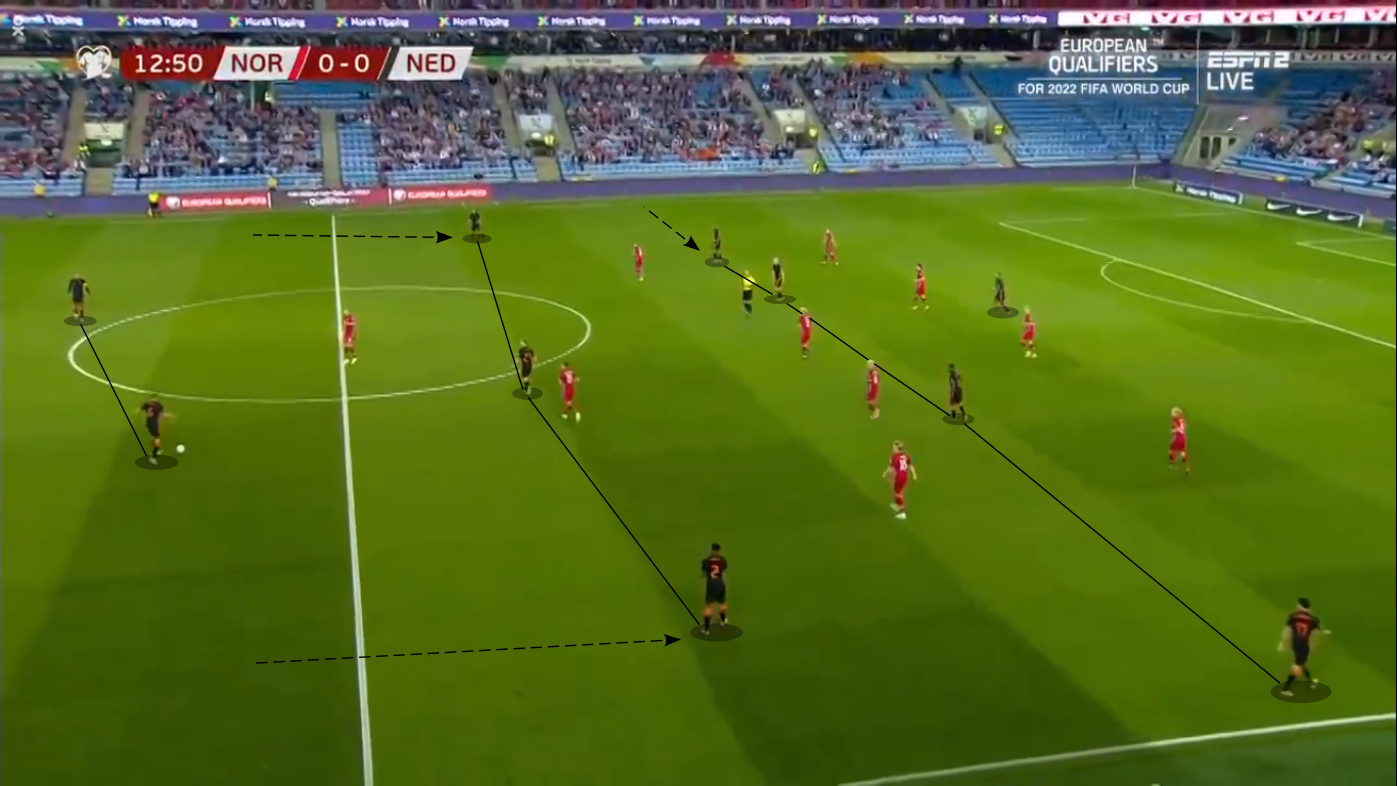 As was the case under de Boer. de Jong was the key to everything that the Netherlands did in possession. He was the dominant figure in terms of touches and passes once again – managing a match-high tally in both metrics with 130 and 116 respectively. His heatmap backs up what we previously discussed about his positioning in the build-up, also indicating that he preferred to drop to the left of Virgil van Dijk. 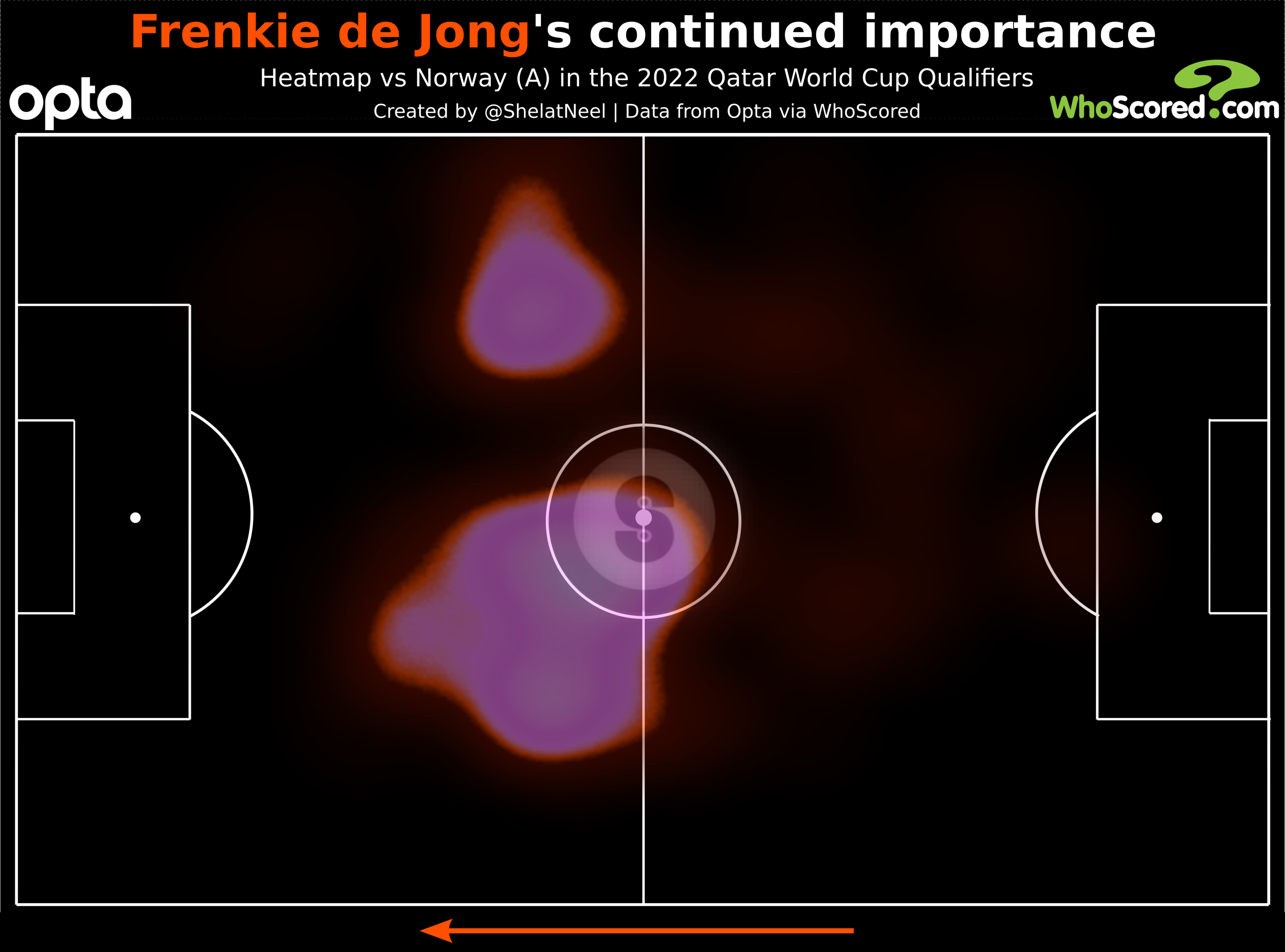 The dynamic between Jurrien Timber and Berghuis on the right was quite interesting. As aforementioned, the winger would often hug the touchline, prompting the 20-year-old defender to stay back and take up a narrow position. 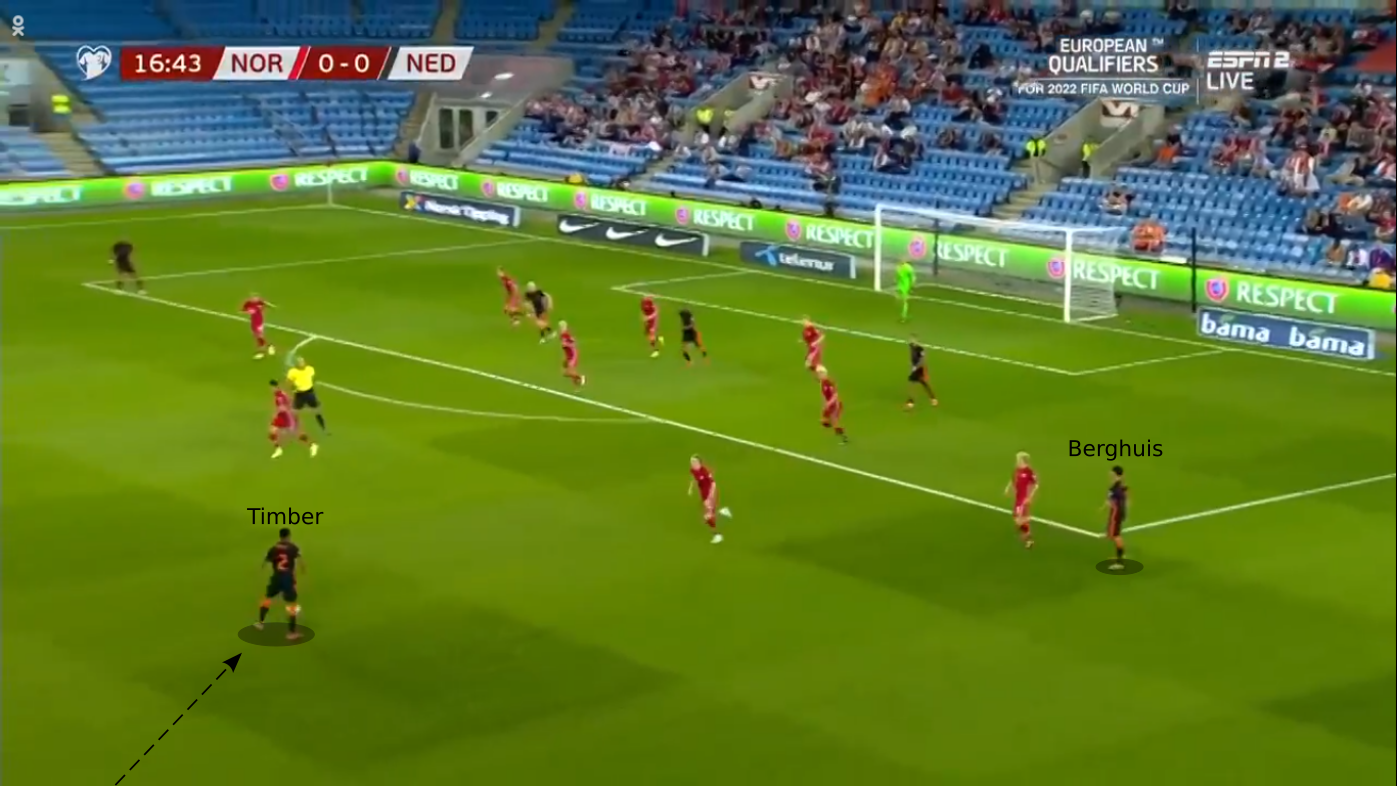 In other cases, Berghuis moved inwards in the attacking line, allowing the full-back to take up a more orthodox position out wide. 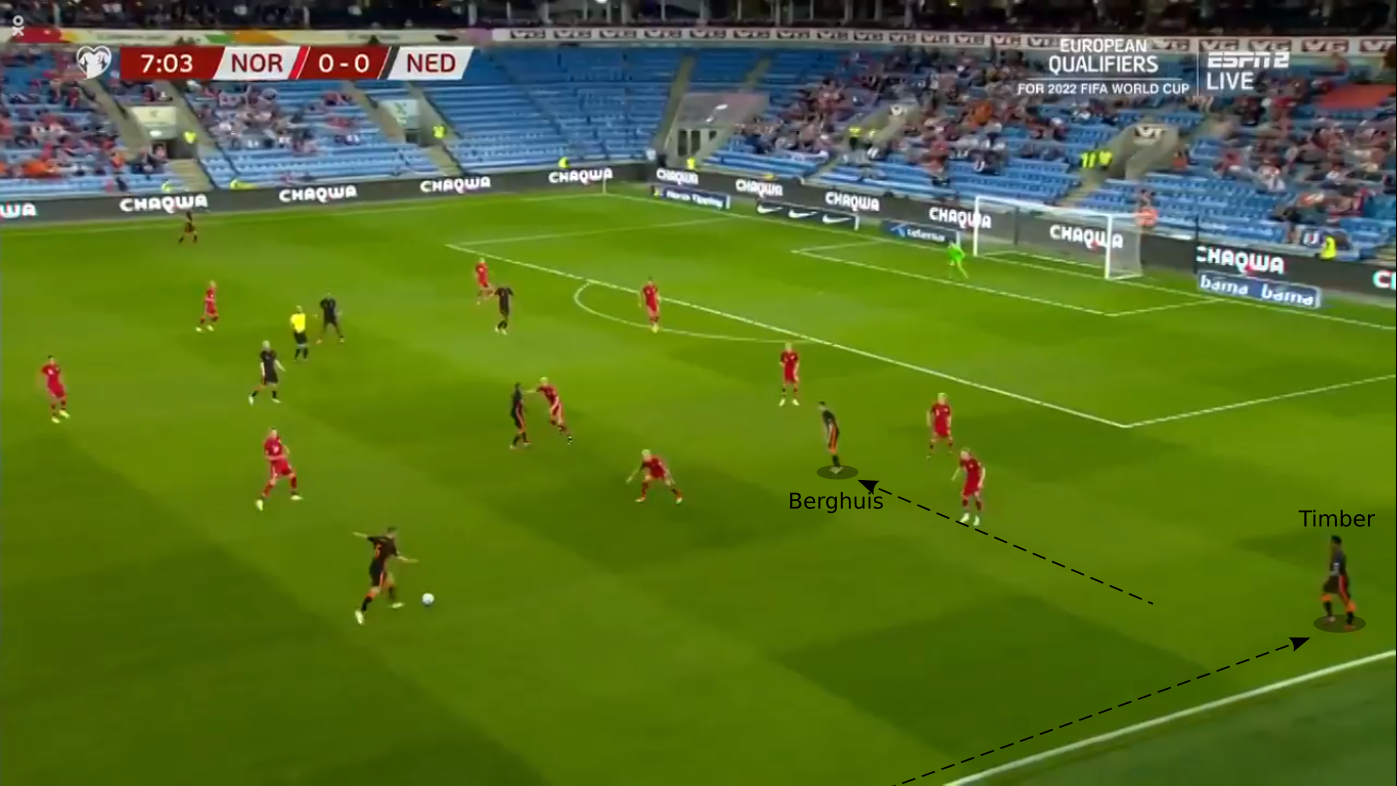 Against a compact 4-4-2 Norwegian block, the visitors naturally struggled to break through centrally. The wings were, therefore, the most fruitful route for creating chances, and the most common theme in their attacks came on the right, where Berghuis would drop deep and drag Birger Meling (Norway’s left-back) away to vacate a pocket of space in behind, which would be used by either Depay or Wijnaldum, who would then have the opportunity to cross. 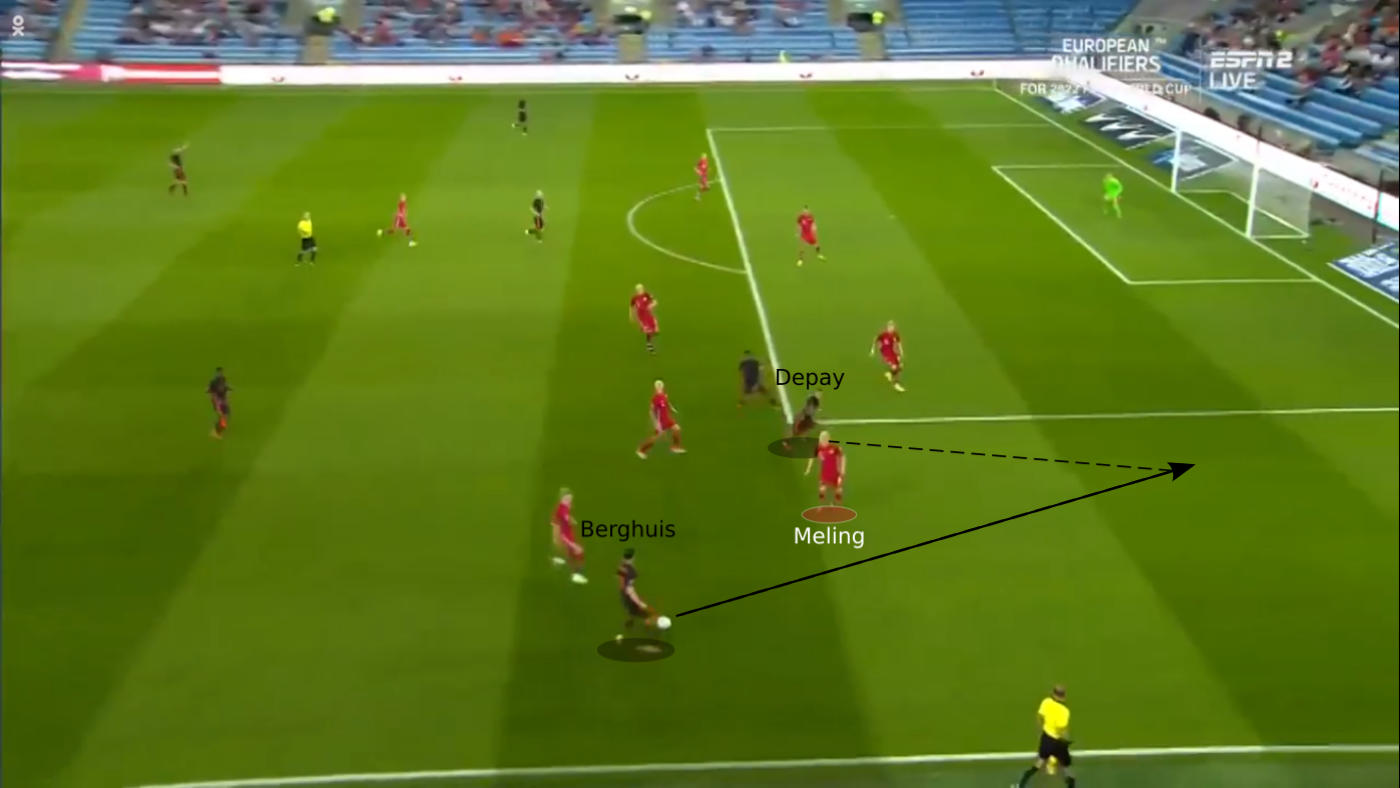 That was exactly how the Dutch goal was created, as Berghuis slipped a ball down the wing for Wijnaldum with Meling pulled out of possession. 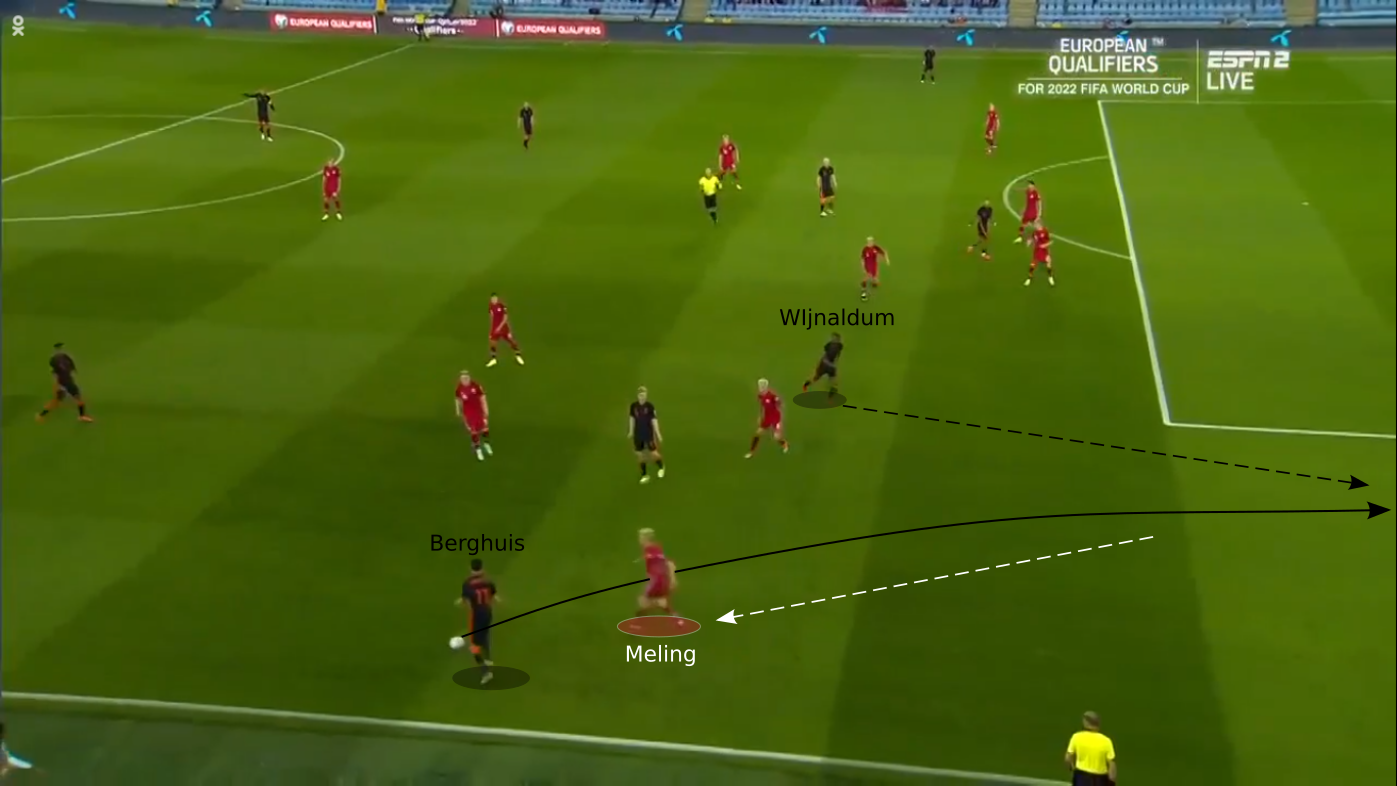 Van Gaal’s side did not have an overwhelming number of bodies in the box, but they had their attackers spread nicely. Gakpo was typically found at the far post (from where he attempted four open play headers in the match), Depay lurked centrally to occupy the centre-backs, and Klaassen made late bursts into the box. 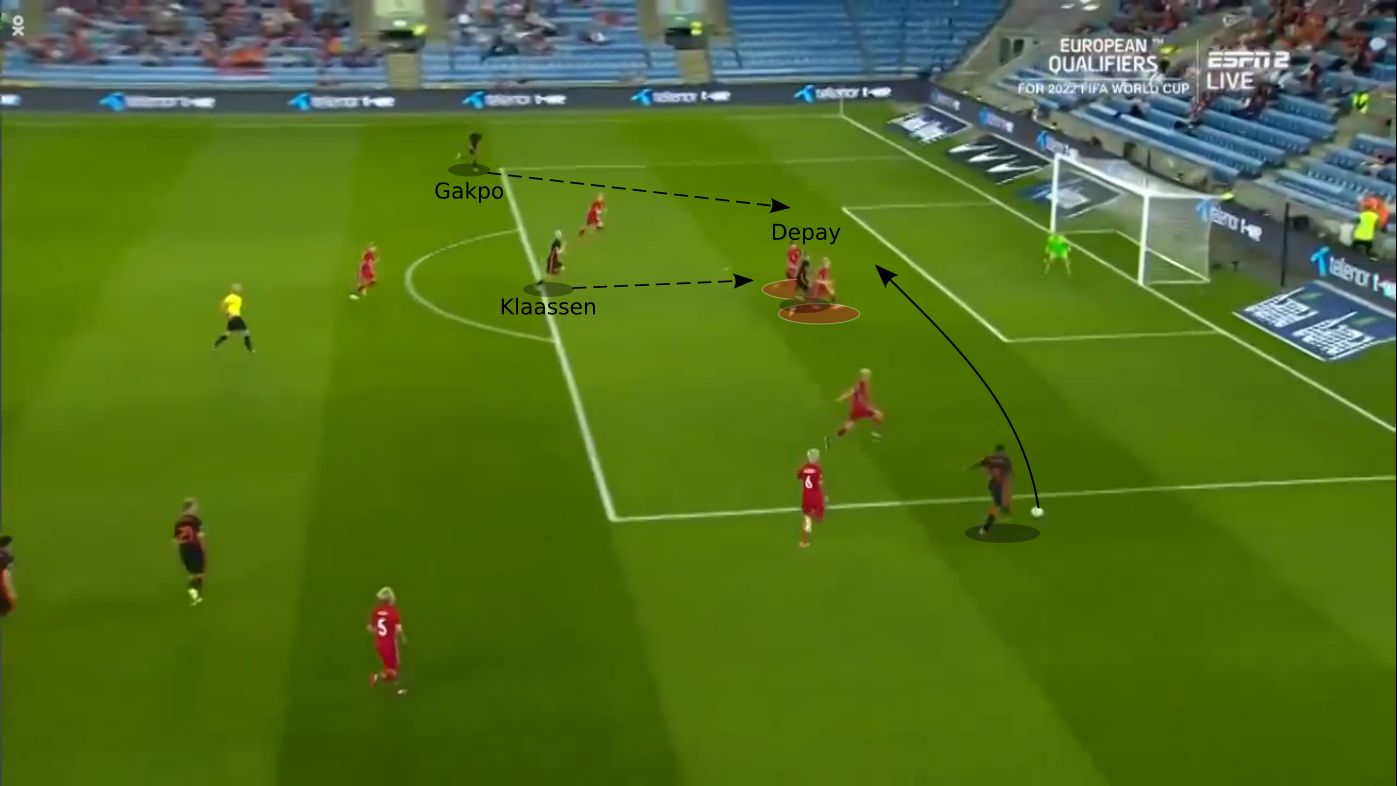 Indeed, it was the Ajax man who ended up poking the ball home to equalise.

The Netherlands’ set-up with the ball also accommodated counterpressing, which was a key factor in their dominance of possession as they saw over 65% of the ball. 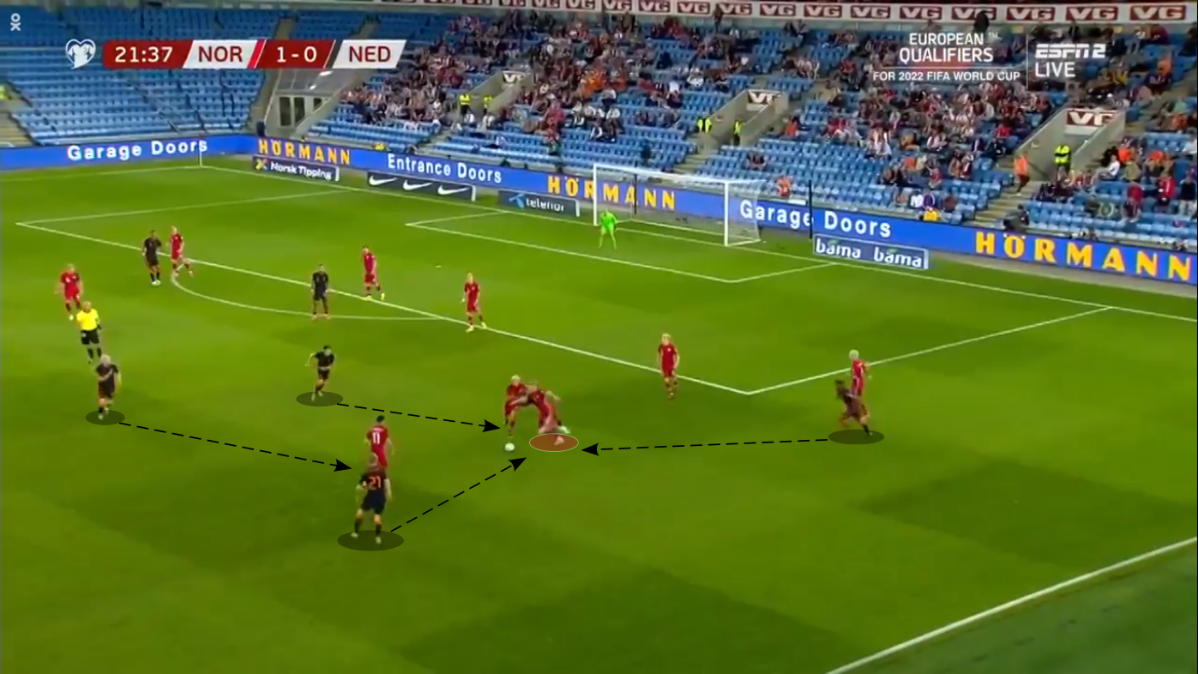 Norway lost possession in their own half on eight occasions (more often than they did in the Dutch half), which signifies a successful application of counterpressing on the visitors’ part.

However, there was a massive risk attached to this too, because if the home side were able to evade the counterpress, they had some serious quality up front to punish the Dutch defence. That quality primarily came from a man called Erling Haaland.

In fact, they only allowed two such breaks to occur but were very nearly punished on both occasions.

The first saw Jens Peter Hauge slip Haaland through on goal in the 16th minute, with Justin Bijlow’s quickness off his line saving the day.

The second time around, a failed counterpress… 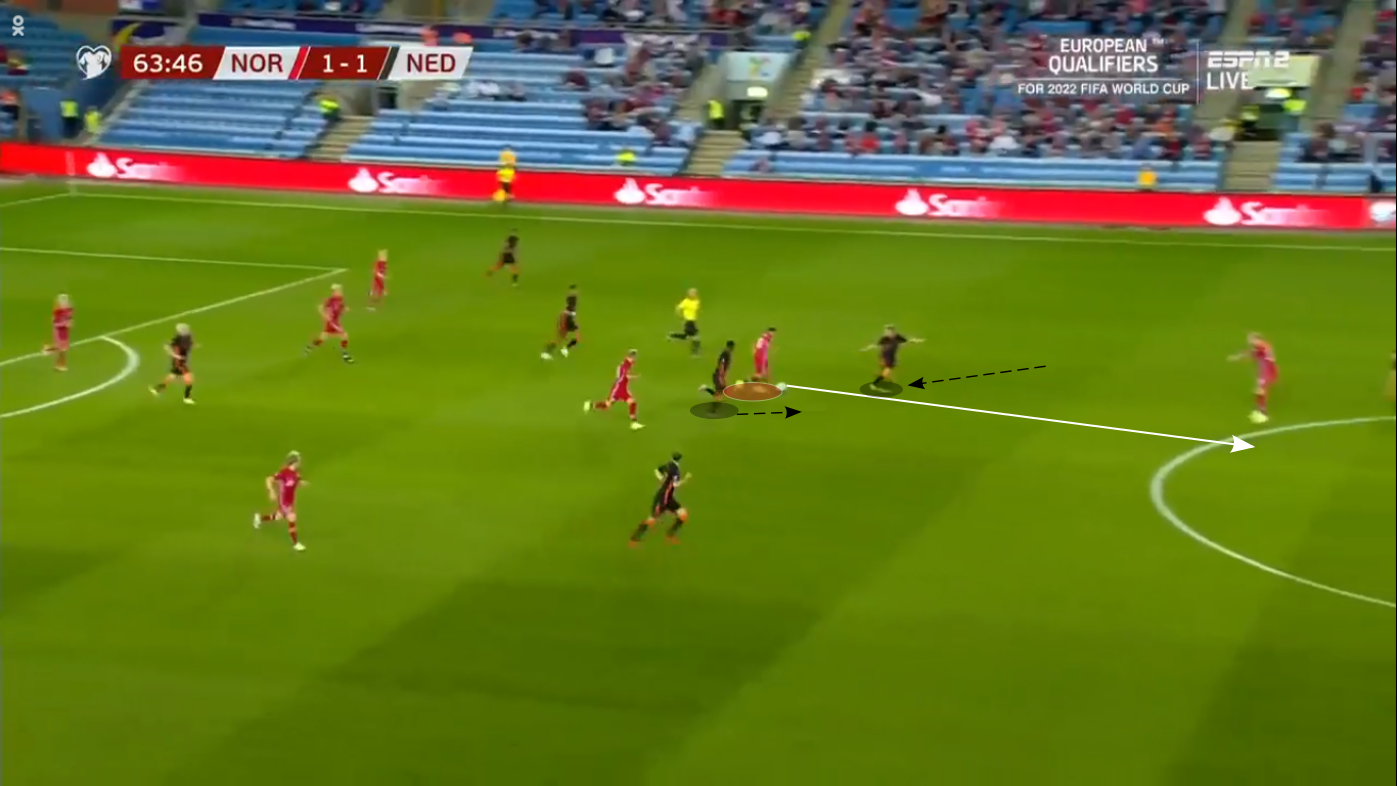 … led to Martin Ødegaard leaving the Borussia Dortmund striker in a similar situation, and this time it was the inside of the post that saved the visitors. 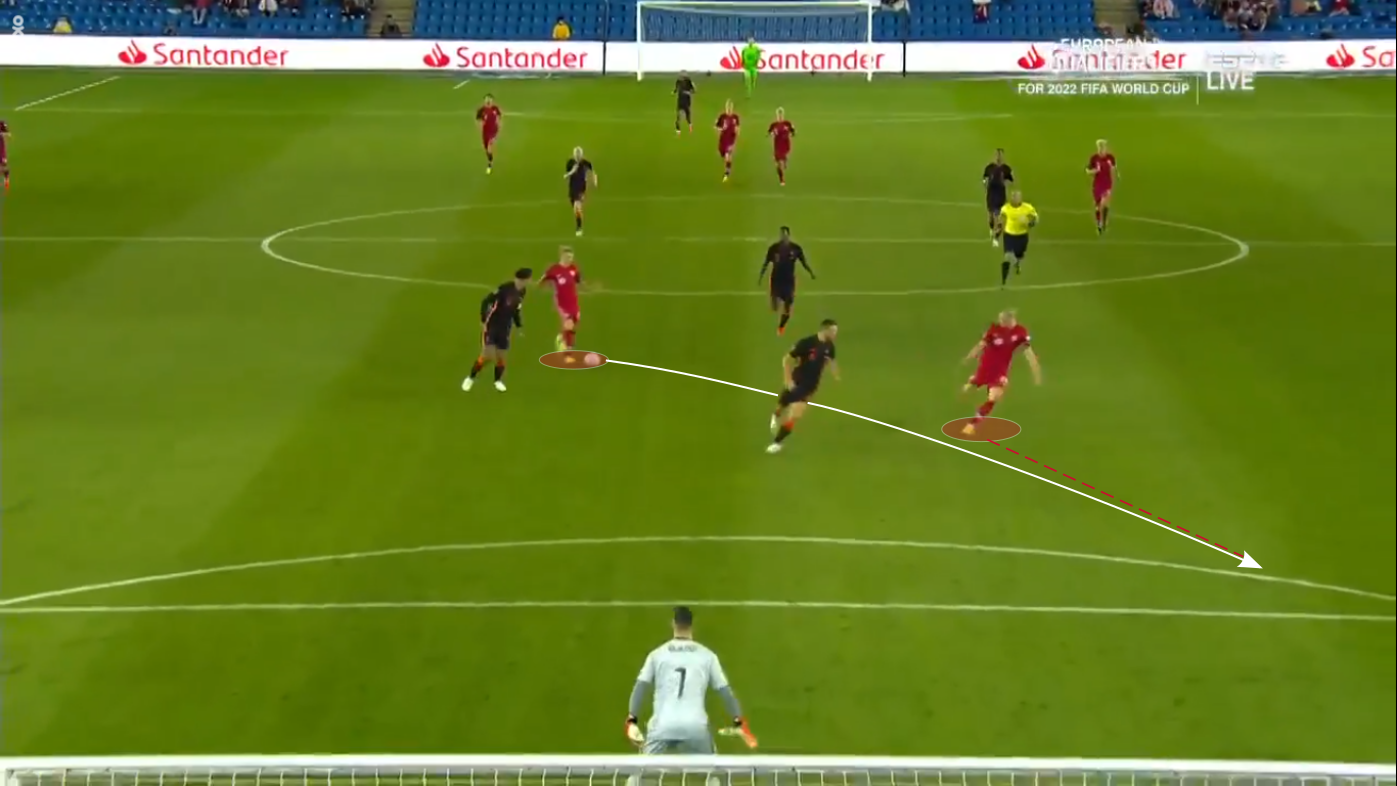 Without the ball in organised defence, the Netherlands sat in a vertically compact 4-1-4-1 with the wingers dropping back. They did not really press high up the pitch although Depay did close down the keeper when he could and the wingers tried to push the full-backs back if they received the ball in tight spaces, however, they mostly waited at the edge of the attacking third, and man-marking was practised in midfield.

A high defensive line, though, did not seem to be the smartest move against a forward with the speed of Haaland, especially with virtually no pressure applied to the centre-backs in possession. 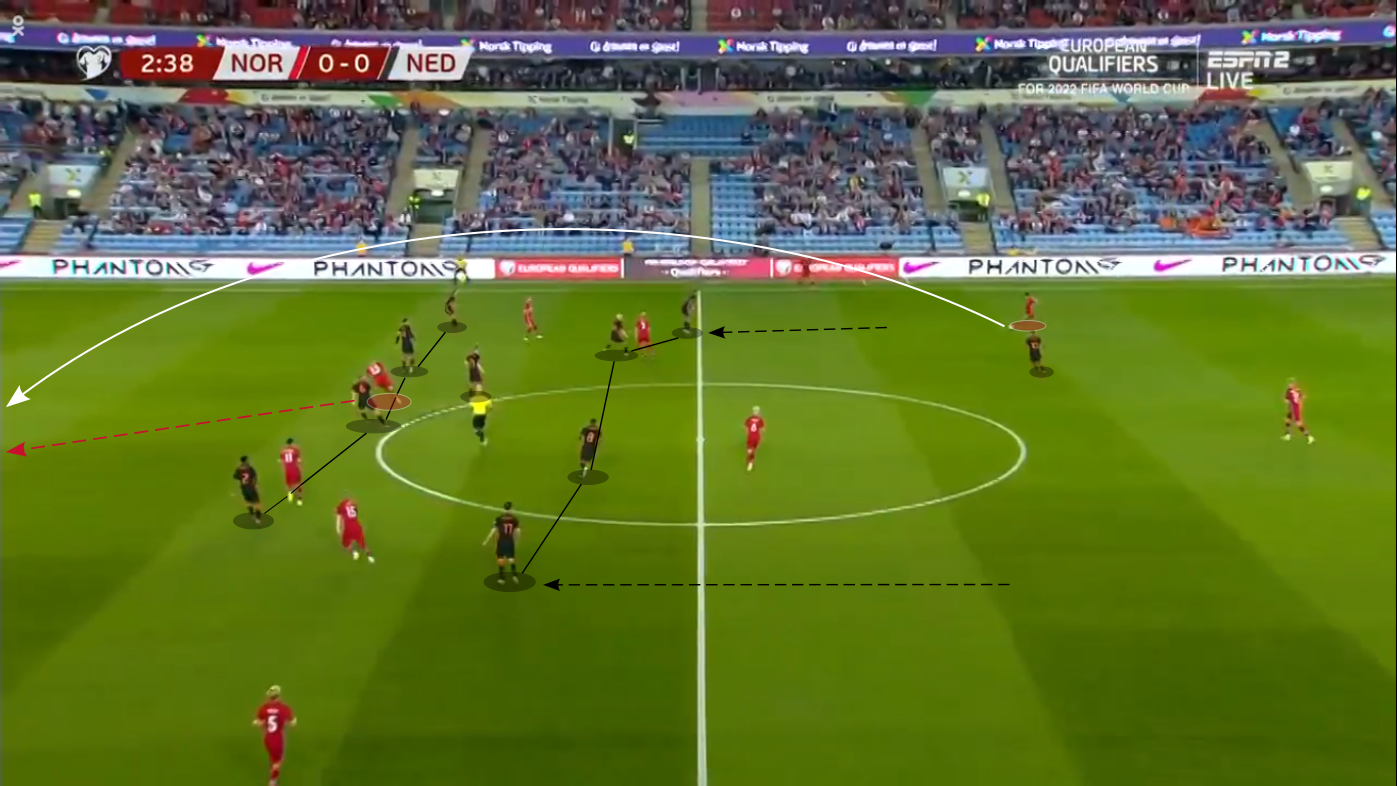 All things considered, this was a solid return to management for van Gaal given the lack of time to prepare in-depth and quality of their Norwegian opponents. The shift in style from de Boer’s vertical and direct football that aimed to stretch the opposition in all directions to the ex-Bayern Munich manager’s controlled possession seemed smooth enough, as none of the players looked notably uncomfortable in their new roles.

One match is, of course, too small a dataset to start drawing any conclusions, but the signs certainly are encouraging for the Netherlands. Besides dominating possession, they also had the clear majority of shots with 17 to 7 conceded and a significantly greater xG at 2.26 compared to Norway’s 0.88. Then again, had one of Haaland’s two one-on-one shots been placed slightly differently, his side might have come away with a victory, so some defensive issues still need to be ironed out.

Overall, though, it would be illogical to ask for anything more than a decent showing from the Dutch in this match, but they will undoubtedly have to improve as the draw between Turkey and Montenegro means that their group is still wide open, and even one slip-up now could prove decisively costly.