Days after optimism around AC Milan started simmering, Genoa turned it off. Milan beat Juventus 1-0 on Saturday, but lost to Genoa two days later. The 3-0 defeat at the Stadio Luigi Ferraris was Milan’s heaviest of the season, and the fact it happened immediately after their best result is a case in point.

Milan were already considered Scudetto challengers following their Juve victory. Although manager Vincenzo Montella quickly put aside any title thoughts, there was no stopping the Milan enthusiasts from dreaming:

The Scudetto? We don’t belong in these discussions. We have to keep a low profile. Inter started well last year, after 15 games they’d already won the Scudetto and we all known what happened there.

Milan have the sixth youngest squad in Serie A this season. With impressive academy products like 17-year-old goalkeeper Gianluigi Donnarumma and 18-year-old midfielder Manuel Locatelli, the club’s future looks bright. But as the caveat goes, title-winning consistency is hardly the stuff of youngsters. There will always be frequent setbacks.

And so it was proved at Genoa. For a much-changed Milan eleven, things unraveled after an early Nikola Ninkovic goal for Genoa, followed by a straight red card for Gabriel Paletta in the second half. Milan played well enough to earn at least a point, but they looked completely different from the side that beat Juve only two days earlier.

Consequently, Milan dropped to fourth, from the heights of second place after the Juve game. After one-third of the season, not many would complain about on-pitch issues at the club. Montella has brought renewed optimism to a club most people wrote off at the start of the season. His steady dependence on the club’s young talents has brought results, but the Scudetto dream, for now, is still hyperbole.

There are areas to improve for the club, and the Genoa result provides the perfect setting for some introspection. Juventus are way better in terms of quality and experience, so are Roma and Napoli. Even a Champions League place at the end of the season would be remarkable for Milan.

Juve look better with Marchisio in the side

192 – Claudio Marchisio will play after 192 days from his last appearance with Juventus (17th April vs Palermo). Back.

Claudio Marchisio finally had some minutes in a Juve shirt this season. The 30-year-old looked immediately in the right place, and made Juve a better unit. The Bianconeri won 4-1 against Sampdoria, who looked like they were still hungover from their derby win celebrations on Saturday.

Can Dzeko fire Roma to the title?

The last time Serie A’s Capocannoniere was a Roma player, the Giallorossi finished second. The 2016/17 season is the tenth anniversary of the only season Francesco Totti won the Serie A Golden Boot, and Edin Dzeko is well on his way to emulate Totti.

Most goals in Europe's top 5 leagues this season:

Dzeko reached 10 goals for the season with a brace in Roma’s 3-1 win at Sassuolo. The Bosnian has found his goalscoring touch this term; whether he can lead Roma to their first title in 15 years remains to be seen. Zlatan Ibrahimovic was the last player to win the Capocannoniere and the Scudetto together, in 2009.

Inter captain Mauro Icardi hadn’t scored in six games, but he led from the front against Torino to hand his team a much-needed win. Torino’s goalkeeper, the Manchester City loanee Joe Hart, made a huge mistake for Icardi’s opener. Although Il Toro came back with a fine Andrea Belotti strike, Icardi and Inter would have the last laugh with a late winner.

Inter’s last win in the league came at Empoli a month ago, with manager Frank de Boer subjected to intense pressure and criticism all the while. The 2-1 win alleviates some of that, but it won’t last long if consistency isn’t maintained. Icardi’s return to form will be a respite for the beleaguered Dutchman.

Two matches last night were temporarily halted due to natural factors. While a strong earthquake in central Italy forced a two-minute suspension of the game between Pescara and Atalanta, torrential rain played spoilsport in Florence in the game between Fiorentina and Crotone.

Both games ran their respective courses, with Atalanta emerging victorious at Pescara, while Fiorentina and bottom club Crotone played out a 1-1 draw. It was Crotone’s only second point of the season, for which the minnows will have a lot to thank the rain gods. 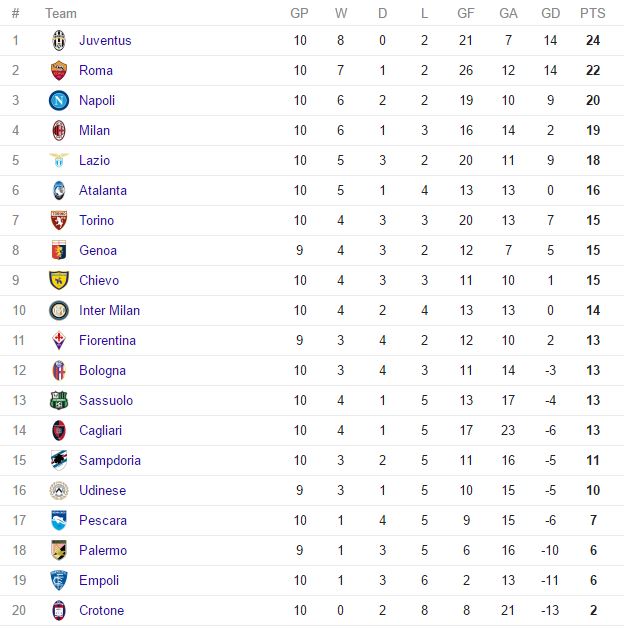