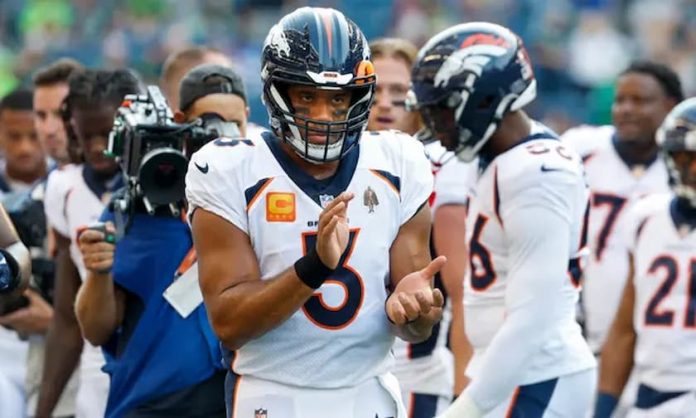 Russell Wilson’s Denver Broncos debut didn’t go to plan as he was subject to boos from the Seahawks fans and his team also suffered a 17-16 defeat.

The 33-year-old quarterback left the Seattle Seahawks in March, in what was called “one of the biggest trades” in NFL history. The trade included the Seahawks receiving multiple draft picks and three players.

Wilson enjoyed a successful time in Seattle helping them secure ‘back-to-back’ Super Bowls in 2014 and 2015. He also won more games in his first decade in the league than any other QB in the league whilst at the Seahawks.

However, his success has not been quickly replicated at the Broncos as they lost out to the Seahawks by one point on Monday night. The Broncos had a chance to steal the game with 15 seconds to go, but Brandon McManus saw his 64-yard field-goal attempt sail wide.

Wilson played a solid match though as he finished 29 of 42 passes for 340 yards and found Jerry Jeudy with a 67-yard touchdown pass. However, the Broncos committed 12 penalties and fumbled twice on the goal line, which ultimately led to their defeat.

Following the game Wilson said: “I couldn’t have been more locked in, it just didn’t go our way. But guess what? There’s 16 more games to go.”

On the other side of the field, Seahawks new starting QB, Geno Smith, had a brilliant game making 23 of 28 passes for 195 yards and two touchdowns. He started the season as a team’s first-choice quarterback for the first time since 2014, when he was at the New York Jets.

Denver Broncos will be hoping to put some points on the board in the next few weeks to impress their new ownership group, which includes Formula 1 driver Lewis Hamilton –  they face Houston Texans at home next on Sunday. Denver signed Wilson to a five-year extension, which is worth up to $245m, as they look to win their first Super Bowl since 2016, following Peyton Mannings retirement.

The Seahawks will travel to the San Francisco 49ers in their next game on Sunday.