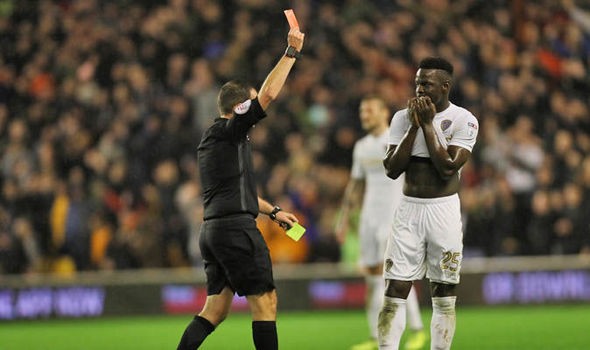 The 19-year-old midfielder was sent off when his side were 2-1 down. His departure made it difficult for Leeds to get back into the game.

Leeds were 2-0 down at halftime but Ezgjan Alioski scored immediately after the break. Vieira’s sending off extinguished any hopes of a comeback.

Vieira received his marching orders in the second half after a clumsy foul.

The midfielder issued a heartfelt apology on Twitter. His tweet read: “Just want to apologise to the fans and my teammates for my red card tonight, I made the wrong decision at a crucial time in the game. We will come back stronger as a team and I will make up for my mistake when I get back on the pitch.”

This is how the fans reacted to Vieira’s apology on social media.

Head up Ronny, you was playing well and was just naive but it happens and you will learn from it #MOT

We’re Leeds, we like to see our players giving their all and playing on the edge. If a card comes because of it, so be it. You’ve nothing to apologise for #LUFC

The very fact you feel bad about what happened means you care about the club, the fans and the great white shirt. You will learn and grow from mistakes you make and I’m sure will become a very accomplished professional for years to come. Chin up Ronaldo. MOT

No need to apologise for showing passion and commitment fella.

You were best player til then….keep playing tough and move on….top man …MOT

Wrong decisions get made by everyone Ronaldo, appreciate your honesty and we move on to Barnsley for a dinnertime 3 points ?
MOT

You were brilliant and played with passion. Referee inadequate and unfair! On and on! MOT

Leeds are going through a rough patch right now and it will be interesting to see whether Christiansen can turn it around soon. The 44-year-old is under a lot of pressure right now and it seems that the fans are losing their patience with him as well.

The Whites are currently 10th in the Championship standings after eight defeats in their last eleven games.