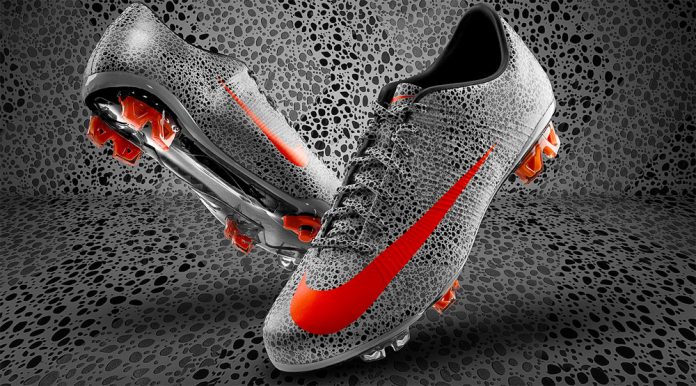 Last night was the official reveal of Nike’s newest line of speed football boots, the “designed to Ronaldo’s specifications” Nike Superfly II Safari. The inspiration for these boots came from an old school pair of safari trainers that Nike made in 1987. Here’s a bit from Nike about the history behind the safari theme and the safari print:

“Nike originally introduced the print on the Air Safari running shoe in 1987, and the unexpected aesthetic transformed performance footwear design. At the time, trailblazing Nike designer and father of the Air Jordan series Tinker Hatfield began exploring non-traditional materials, patterns and colors to use in athletic footwear and conceived the now legendary ostrich-skin print.”

You can see both the new Nike Superfly II Safari and the original Air Safari from 1987 side by side in the picture below:

The news from Nike is that all of their limited-edition Nike Air Safari, the running shoes, sold out immediately after being put on sale back in 1987. There’s no news on whether they will be releasing a special edition of that running shoe for sale now, it seems they’re happy promoting the football range more for the time being.

Nike says that “the iconic print is back — this time on the feet of one of the best players in the world. The updated print has a stylized look, wrapping the entire boot and laces for a bold effect. Ronaldo’s signature CR Mercurial Vapor SuperFly II represents the first time the print has been applied to performance football footwear.”

Here’s a picture with Ronaldo and the new Superfly II, which shows the football boot floating above his hand, due to the fact that it’s “so unbelievably light”. A little bit of gimmickry from Nike as they try to promote their lightweight boots:

Here are some pictures of the new Nike Superfly II Safari, made to Ronaldo’s specifications. To see them in higher resolution, click the images:

In another nod to speed, the boot’s arresting Safari print is overlaid with a tonal chevron pattern that is illuminated in certain light. Designed to appear as a flash in a player’s peripheral vision, the reflective graphic can improve player awareness on pitch.

I guess the idea behind the reflective graphic is good, making the boots more noticeable in though situations on the pitch. Here are some pictures that show the chevron pattern:

Some key specifications of the new boots are the next-generation Nike Flywire technology in a streamlined upper for a lightweight, stronger, more dynamic fit, anatomically correct, contoured speed last mirrors the shape of the foot for an enhanced fit and feel, lightweight perforated sockliner for superior low profile cushioning and support while reducing cleat pressure for comfort, strategically configured blades for superior footing and quick cuts in any direction, toe-off traction for bursts of speed, pressure-activated Adaptive Traction Technology at forefoot for superior grip and acceleration on a variety of field condition, firm-ground molded studs (FG) for use on short-grass fields that may be slightly wet, but rarely muddy.

The weight for this boot is 8.3 ounces, which is around 235 grams. You can see how this ranks in comparison to it’s category opponents in my 10-11 Speed Boot Review.

The boots will be officially on sale on November 15 and they will be first worn by Ronaldo on November the 7’th in the Madrid derby between Real Madrid and Atletico.

To read more about the technical details of the new Safari Superfly II, you can read our post about the Nike Superfly II – all the details.

To pre-order your pair, click the image below. Our friends over at Kitbag already have it stocked, but shipping can only begin on November 15, when they are officially on sale.

What do you think about this boot and Ronaldo’s personal taste? Do you think it’s a well-designed football boot for this market today, or is Nike running out of ideas?

For a less active, but more stylish shoe, consider grabbing a pair of the latest ColeHaan chukka boots.